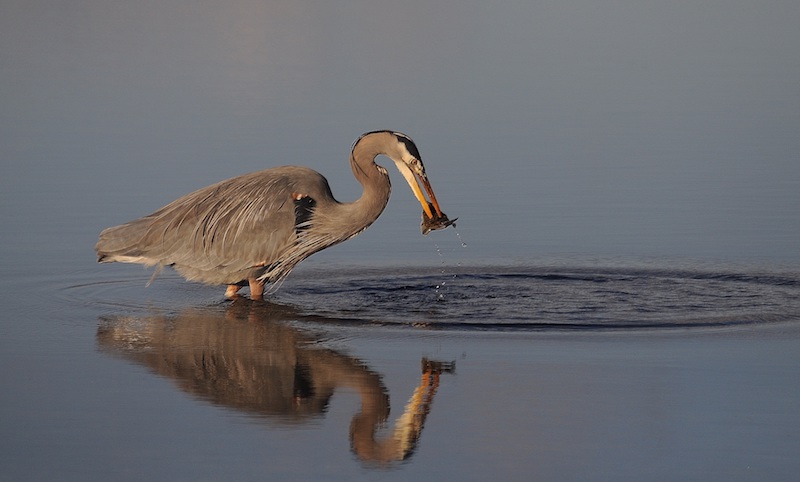 I’ve written before about the dog days of birding and this summer has proven beyond a doubt that they exist. These are the times that try a birder’s soul because birds are painfully scarce in most habitats, and finding them requires a bit of persistence and a large amount of patience. On a late July trip to Scudder Pond, for instance, I observed ONE BIRD! The lone cedar waxwing was a welcome sight, considering that I saw not a single red-winged blackbird or even a mallard. This was highly unusual, especially for this location. This trend remained unchanged into mid-August.

There are factors that contribute to this annual phenomenon. It’s important to remember that this time of year is the end of the long breeding/nesting season that started back in the first part of spring. The fast-paced excitement that accompanied the new arrivals with mating rituals and nest building gave way to the even more exciting and nonstop feeding of nestlings. And now, the fields and woodlots are quiet as the seasonal pendulum swings toward fall. There’s no need for males to draw attention to themselves by singing to attract prospective mates. The singing season is behind us.

On just about every trail that traverses freshwater locales, I had a similar experience wherever I went. Add to this scarcity of birds, the hotter weather the farther inland I traveled. Whenever this has happened in the past, the solution for me has been to head for the saltwater habitats, ranging from the Semiahmoo Spit just south of the Canadian border to the rocky shorelines of Larrabee State Park. In general, you can usually count on a breeze off the water to find some relief from the heat and there are always birds. In a worst-case scenario, you can hone your skills on field identification of four-year gulls like our common glaucous-winged gull.

With all this in mind and if you have the wherewithal (time), pack a lunch or two and drive up I-5 to Exit 276 to begin a wonderful day of recovery from the doldrums of the dog days. The last Blaine exit before the border is only the beginning of what is always a great day for the avid or inner birdwatcher. After two roundabouts and a quick crossing of the railroad tracks, park on the right just after crossing Cain Creek to begin. The peninsula that accommodates Blaine harbor is where I’ve started my field trips in the past for North Cascades Audubon, the Washington Ornithological Society, North Cascades Institute, and the Wings Over Water festival. It’s safe to say that it’s a proven success and in the tradition of name dropping, this is the same location where I started David Sibley’s Whatcom County tour in 2003.

After parking and donning all the prerequisite bird watching gear, simply walk the shoreline along the ever-changing mudflats of Semiahmoo Bay to the end of Marine Drive and the Blaine Public Pier. Depending on the tide, your trip to the pier can be lengthened or shortened accordingly by the number of birds you encounter along the way. This is the time of year, believe it or not, that the first shorebirds are beginning their southbound migrations. Long-billed dowitchers, western and semi-palmated sandpipers, and dunlin were here during the first week of August. Black oystercatchers are more common than ever, along with the usual assortment of gulls and great blue herons.

You soon begin to appreciate the location of the public pier, where the channel between Blaine harbor and Semiahmoo is always alive with a variety of birds. Every diving duck that you’ll find in your bird books has been spotted here. This is a wonderful place to spend time, especially if you’re armed with a good spotting scope. Of special interest is the very large nesting colony of double-crested cormorants on the harbor breakwater. The best way to experience the colony is by way of kayak or canoe but they are entertaining from every angle. The nests of this ever-expanding colony are filled with chicks into late summer.

Your walking tour of the Blaine waterfront ends at the public boat launch where surprisingly good sightings have been reported recently. This is another area where the number of birds corresponds with the tide. High tides are best since the birds will be closer to the watchers. Given the ebb and flow, not only of the tides but also the birds, you could spend an entire day of recovery in this location but there’s more to see and Semiahmoo awaits. As you make the leisurely drive around Drayton Harbor be sure to use the small access points to check for birds at the mouths of Dakota and California Creeks. These estuaries flow into Drayton Harbor and are generally gathering spots for shorebirds, waterfowl, and herons that depend on these sources as good feeding locations.

The Semiahmoo Spit has held a bit of fascination for me over the past 40 years, from the varied perspectives of history, geology, and biology. Despite the increasing development on the spit, the birds continue to gather on both sides of the spit and seem to be mostly unaffected by all the human activity. A recent report of a flock of black-bellied plovers was indicative of what’s still to come in the next few weeks. The way you approach the spit is up to you as far as walking or driving. I’ve also taken my bike before, so there’s a third option.

My general plan of attack is usually to park at the end of the spit, originally known as Tongue Point. The public shore around the spit is totally accessible even to handicapped birders. From the point you have an unobstructed view of the expanse of Semiahmoo Bay as it stretches all the way to White Rock, B.C., as well as the best view of the channel between the spit and the Blaine waterfront. The avian traffic in this watery passage is always exciting to observe. The deep water is prime feeding ground for diving ducks, loons, and grebes.

If your day is longer and you’re feeling the urge to continue the dog days cure, drive the shoreline south toward Bellingham via Birch Bay and Birch Bay State Park. The entire perimeter of this bay is accessible and is always rich with bird life. Shorebirds, like greater yellowlegs can be plentiful along Birch Bay Drive and the cobble beaches of the frontage drive through the state park often host good numbers of dabbling ducks like American wigeons and green-winged teal.

Depending on your time and personal schedule, other sites to visit as you continue southward are Sandy Point, and the south end of Bellingham Bay at Marine Park in Fairhaven. Green herons are still lingering in the area around the park where as many as thirteen young herons fledged over the past two years. By the time you reach Larrabee State Park, you will have little or no memory of the dog days of birding as you watch another spectacular Pacific Northwest sunset. We are truly blessed to have this resource for renewal close at hand.
_______________________________________