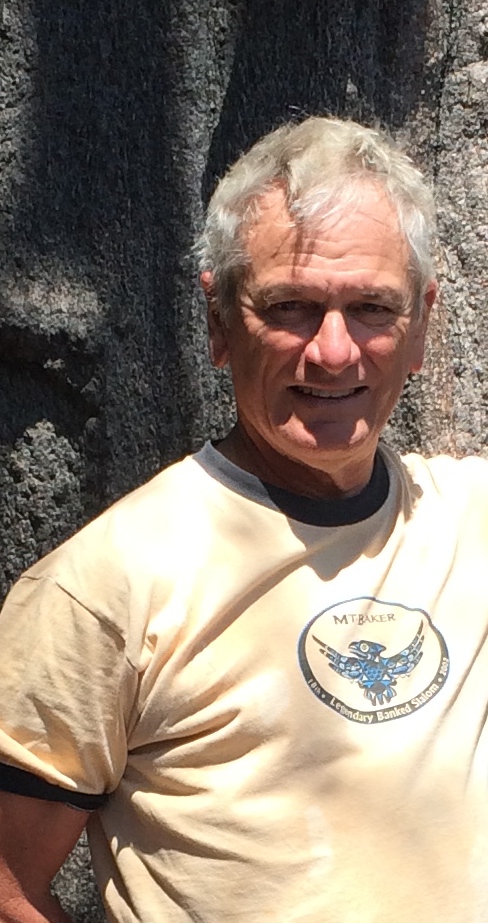 Larry Freeman in front of a baobab tree in Namibia.        photo: Patricia Freeman

Larry Freeman is a psychiatrist who moved here in 1995 from New Zealand. His wife is a social worker and they have two sons, a daughter and one grandchild. He has an active private practice and is a family systems therapist and environmental activist from a health and ethics perspective.

Kathryn Fentress: What brought you to Bellingham?
Larry Freeman: We had been in Spokane for 15 years before New Zealand. We had planned to stay in New Zealand permanently, but we left behind two adult sons, and it was unbearable. Moving there had been a difficult decision, but I had been offered an opportunity to develop a child psychiatry service, which I had always wanted to do. Two weeks before we arrived, they reorganized and my dream program was no longer an option. I found myself working as an adult psychiatrist again. I did get involved somewhat with the Maoris and had some great experiences with them.

Washington was the one constant in our lives, and a local physician here encouraged me to come, because my family emphasis was unusual, especially for a psychiatrist. Over the years, I used to talk to family therapists about medication, and their eyes would glaze over, and then I’d talk with psychiatrists about family systems, and their eyes would glaze over. One of the driving issues in my life has been to resolve contradictions. I operate with the basic notion that if two things are valid, there has to be a way of reconciling them or at least one is not valid. And when one gives up the effort to resolve contraindications, it is an invitation to give up one’s heart and mind.

I was raised in Hawaii and lived a privileged life, went to a private school. But I always sensed that there was some unspoken something going on. When I was 30, I read a book about Hawaii as a colonized country. As the years have gone by, I have revisited that story and my life growing up and what the author really meant. At my 50th class reunion, I spoke with a Chinese man who had been my good buddy in elementary school. In sharing our stories, I was astonished to hear that he remembered how in 7th grade the “Oriental” kids went to one side of the cafeteria, and the haole kids went to the other. He told me how he had gone home and, in bewilderment, told his mother. He was shocked at her unemotional “This is the way it is.” His perspective and protest added another layer of understanding to my history, and is an example of how I keep rewriting my stories.

Let’s talk about your current project: Physicians for Social Responsibility (PSR).
I am a member of the Washington PSR which is a chapter of the national organization. PSR came out of a group of physicians against nuclear war way back. Helen Caldicott, M.D. was the founding president of PSR in 1987. Nuclear war and the associated weapons were reframed as a public health risk. Education was and is a big part of our strategy. By then, nuclear power plants around Washington in the 1980’s had become a growing concern. The focus was on Hanford, which had both military and energy programs. The Hanford Education Action League (HEAL) revealed how the people who lived downwind from the plant were particularly endangered, because in the 1950s the military had deliberately released radiation for secret research. From HEAL it was a short jump to PSR.
As physicians, we are theoretically given some credibility because our perspective is rooted in an ethic of care and openness. We are obliged to share with people what we have grown to understand. This ethical motivation appealed to me. After we settled in Bellingham, I ran into a fellow who had been in Spokane, and we collaborated on a couple of cases. He asked me to join a WPSR Task Force on the health effects of global climate change.

So is PSR for physicians only?
Larry: No, the group is open to any healthcare providers and educators. We are exploring what we can do about educating people about climate change and its health consequences. We do not doubt the science. If we did, we would have to doubt all science and not be able to function as physicians relying upon it to guide our care of patients. Immediate concerns in our area are the health dangers of the coal and oil trains to our communities.

We sponsored a six-hour training this past November on how to talk to people about climate change. One of our presenters provided an excellent slide show and gave us a copy to use locally. Other people offered presentations. What we do, basically, is consider opportunities to make a strategic difference so we focus on educating politicians and educators, the governor, other governmental bodies and fellow healthcare providers. I want us to integrate with other groups with the same basic agenda. We are, for example, very grateful to the Lummi Nation for shutting down the terminal at Cherry Point. We want to align with them and cultivate more of a relationship with the indigenous and healthcare people in British Columbia. In our monthly task force meetings, the idea occurred to me of educating children about the health consequences of global climate change. Because many people don’t think about climate change except about vanishing polar bears and possible floods, the “powers that be” see it as a conflict of values and priorities. We want to go beyond those heart-wrenching realities and offer a realistic and courageous look at what we need to do to take care of our communities.

Collaborating is more important now than ever to overcome the defeatism and despair many are experiencing. I believe we all have a calling inside of us that requires us to “keep on keeping on.” Solidarity with others helps keep us all moving forward.

Have you been involved as an activist previously to PSR?
Yes, I was very involved with the 100 Acre Wood project when we first came to Bellingham. There was a plan to build 1500 units at the time. The community was outraged so the owners took it off the market and sold it to Horizon Bank. In response to a new development proposal, Dr John McGlaughlin at Western identified the area as a keystone, which is a pivotal point of an ecological system. His research indicated that this piece of land is the entry and corridor for wildlife, a pathway for the migration of animals, and it is a riparian forest with cedar trees growing right out of the wetland. Western students are now putting together a course on how to nurture this land and use it to teach children about the environment and provide opportunities to students for research.

Saving Chuckanut Forest turned out to be an 8-10 year project. I attended some planning meetings with Responsible Development, but I did not do anywhere near as much as many others. They allowed me to offer a different perspective, and we organized attendance and testimony at critical city council and stockholder meetings. Eventually, the city purchased the land but needed help with financing so we formed a task force which proposed to create a Park District which allows the residents in that area to agree to a small raise in taxes in order to pay for the park. With a strong vote in favor, the 100 Acre Wood was secured (for a detailed history of the purchase, see the editor’s note with the article by Erika Wittmann and Coby Hoffman in the April 2016 issue). My wife says that is the best project I have ever been in on.

What do you do to stay strong in the work?
People ask me how I can handle listening to people’s problems all day. I tell them that rather than focus on their “problems,” I look for ways to engage their innate courage and to create new possibilities. I perturb my clients a bit to find the moment that moves us towards growth. Complexity theory indicates that there is within us a desire to grow that leads to an inevitable movement to complexity. When we rework our stories, we are adding complexity. As the people I am fortunate enough to see re-author their stories, in a way I do mine as well.

I reframe and look for the positives in my work and in the world. I am also out in nature every day. I love my family. I am an avid mountain biker and snowboarder. I have been snowboarding for 25 years, done the Mt. Baker Legendary Banked Slalom many times, and in mountain biking I get the same feeling of grace and challenge.

What message would you like to offer our readers?
I grew up on the island of Oahu that was self-contained in many ways. When I was about 6, we went on a field trip to the water supply. In spite of all the rain in Hawai’i, fresh water is precious and vulnerable. Finding out about this was the beginning of feeling a personal responsibility to my home and for our water. The sense of urgency that keeps me in the struggle partly comes from having watched the natural world that was the Hawai’i I knew growing up disappear into the one crop of tourism.

I think that we make ethical decisions every day, and we need to awaken more to this fact. I feel that there is a great struggle under way, polarized around the question: “Are we in this together, or is it every one for him/herself?” My answer is “together in diversity.” I think that whatever the ethical concern one is drawn to, whatever the subject area, we will be most fulfilled if we focus and take action as compassionate communities on those issues that really matter to us.

A teenage girl said it all one day as she bemoaned the choreographed dance of peers who so proudly announced that they “didn’t care.” “Why do you think that is?” I asked. “They don’t want to care, because once they do, they know they will have to take responsibility.”
And the little children will lead us if we let them. Thank you for your interest.