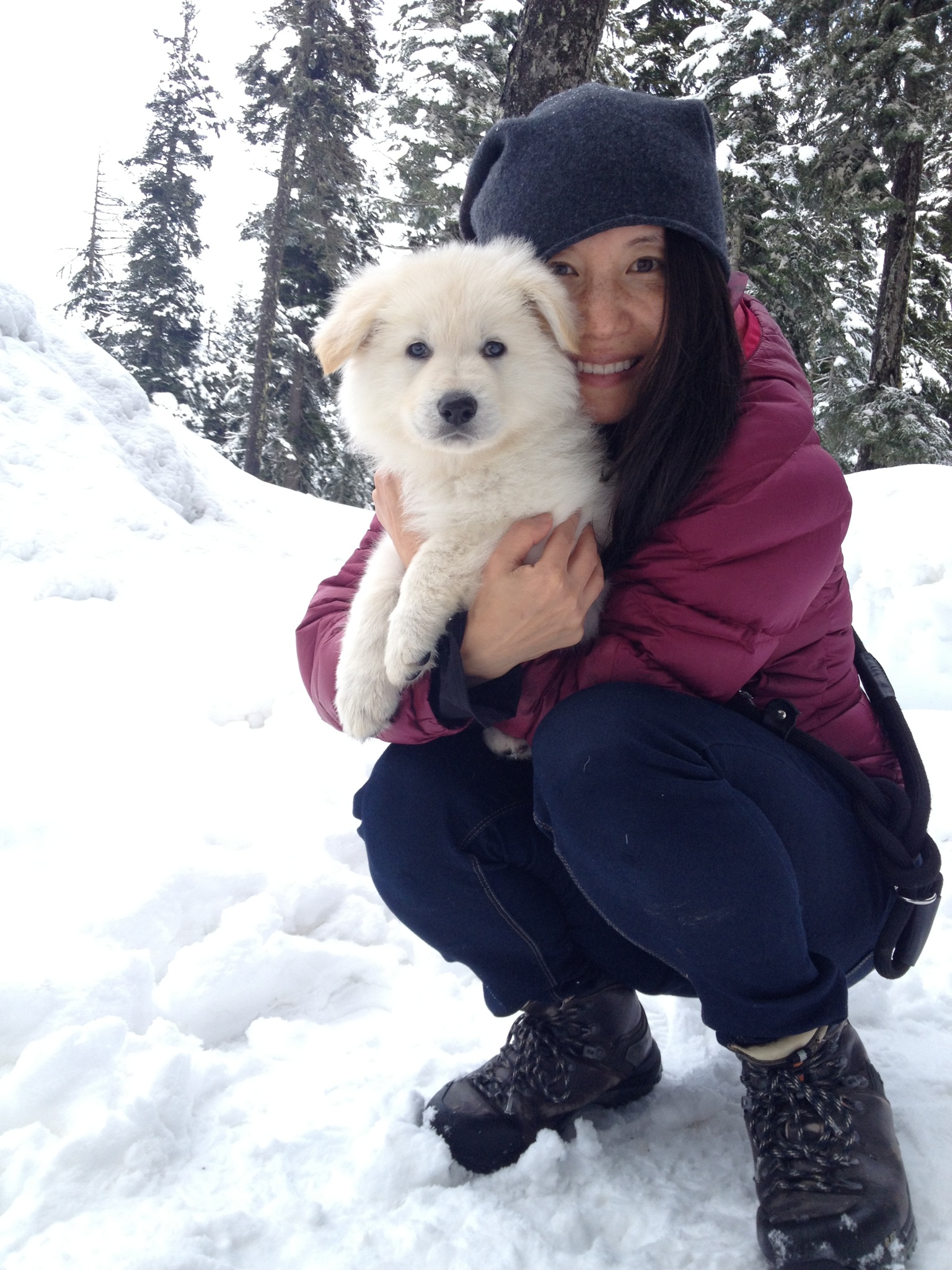 Junga Subedar volunteers as program director of the Whatcom Civil Rights Project and dedicates her time and energy to community service and social justice. She moved to Bellingham in 2001 and lives with her partner, Edward, and wolf pack of three goofy dogs (Valux, Ursula and Norbu).

Kathryn Fentress: Please tell me a little about your personal background.
Junga Subedar: I am an immigrant. As a child, my mother was a war orphan and essentially an indentured servant. She was not allowed to attend school because she had to work for the family, who “adopted” her. My grandmother suffered at the hands of the Japanese for her activism in World War II because she tried to teach Korean to kids, which was forbidden. My grandfather was a soldier and was killed in the Korean War. My family immigrated to the U.S. in 1976, and I grew up in a small, economically depressed town in West Virginia . A lot of family, friends and neighbors had lung cancer from the coal dust in the air. Growing up, I was the only young person of color in my town. I went to a Catholic school in West Virginia, then went to the University of Pittsburgh to study philosophy and then to law school. I ended up in the Pacific Northwest because it was beautiful. I later came to love and care about this community. I do the work I do because this community is worth fighting for.

What are some of the projects you are currently working on?
We connect people with civil right violations to local attorneys and other resources. Another project has been trying to get more data on who law enforcement is targeting and in what numbers. The local departments have not made this easy for us. In some instances, they have told us that this is not the type of data they collect or can share with the community. In others, they have refused to share it in a format that can be easily analyzed. We are also continuing to study the history of Bellingham and Whatcom County to better understand what exists today and how it came to be such a predominantly white community. And, we support local activists in exercising and defending their rights.

The Chinese and the Native Americans certainly have suffered historically.
We live on stolen sacred land of the Lummi and Nooksack peoples. The Chinese, Sikh and Japanese communities were forcibly removed from Whatcom County. Today, they are back, and Latinos and African Americans live here as well. Latinos and native people from Latin America are migrating and working here. We know, from stories of local people of color and the statistics we have so far, that Native Americans and African Americans are currently targeted the most in our community. The data on Latinos is lacking. Our community is no different than any other community in regards to having problems with racial profiling.

How do you get this information out into the community?
We published a zine, The Perilous History of White Supremacy in Bellingham/Whatcom County. We make statements and recommendations when appropriate regarding local legislation and policies, support community members and grassroots organizations through information and legal support. The Racial Justice Coalition (RJC) is a group formed in 2015. It is led by community leaders of color and dedicated to undoing racism through community-lead action and education. RJC actively uses media to release information to the public about racial justice issues. Also this group holds public meetings on the first Tuesday of every month at 7 p.m. at the Bellingham Unitarian Fellowship.

You want to make this a community you feel good living in.
I want it to be a community where everyone can feel safe walking down the street without being attacked for not conforming to a gender binary, be able to go to the Dirty Dan festival without being followed by police, and be able to go to the Farmer’s market without being stared at like you don’t belong here. I want to see our community embrace trans and queer people for all their beauty. I want us to have compassion for houseless, neuro diverse, and differently abled people in a way that allows them to live fully in our community. I want undocumented people to not fear deportation, to have the full rights, protections and benefits as any citizen. Similar to my family, they are fleeing war and economic oppression. This is often the result of our U.S. policies.

What kind of volunteers do you need?
People who are passionate about social justice and believe that everyone deserves to live free from fear, and to live with health and dignity. People who are motivated by being in service to others, knowing that until everyone can live justly and with dignity, none of us are free. People who are strong in their self-identities and understand their status in U.S. society or are willing to deeply examine themselves.

How do you stay hopeful?
I could not do this work without my partner Edward’s support. Also I do not do this work alone. The bulk is it done with support, input and guidance from my activist family. Most importantly these folk and the amazing, brave marginalized people, who share their stories with us, inspire me and make me see how beautiful and wonderful our community truly is. I am grateful to all of them and for the hope and inspiration they give me.

What would like our readers to know in closing?
Racism is a systemic, institutional power structure which discriminates against certain people based on their race, ethnicity, national origin or immigration status. Racism is not about being a bad person or good person. White people in the U.S. benefit from this system of white supremacy. If the people who benefit do not educate themselves and each other about white supremacy and act against racism, they are supporting it. The work of fighting racism has predominantly fallen on the shoulders of people of color. However, systemic racism cannot be successfully overcome until the people benefiting from it and supporting it, end it. White people in the U.S. have a lot of work to do and need to stand alongside black people and people of color in undoing racism.

Kathryn: Thank you for bringing to light the needs of the people of color here in our community and for working to make this a more just and peaceful place for all of us.