Whatcom County enjoys ample water supplies when averaged over the year, but summer conditions are quite different. Winter rains recharge groundwater and fill our streams, but summer’s hot, dry weather increases demand, especially for irrigation, and cuts stream flows. The discrepancy between summer supply and demand will undoubtedly grow over coming decades as local population rises and the local effects of global climate worsen.

Whatcom County population has been growing at about 2 percent a year. North Cascades glaciers shrank by more than 25 percent during the past three decades. Nooksack River summer flows have been dropping by 1 percent a year over the past two decades. Combined, these and other factors point to a growing mismatch between summer supply and demand. (1)

Various supply and demand projects and programs can help improve the summer supply/demand balance. This essay focuses on water-use efficiency, in particular the benefits of concentrating on those who use the most water.

To explore this idea of targeting high users, I obtained monthly water-use data for single-family residential customers of the City of Lynden for three years — 2014, 2015 and 2016. I used these data to compare monthly, summer and annual water use for different groups of customers classified by water use. The bottom line is that efficiency programs focused on the top 10 percent of summer water users, for example, are almost surely much more productive than undifferentiated programs that address all customers.

Data
The city of Lynden provided data for about 4,000 residential water customers. To ensure a homogeneous population, I deleted accounts for multi-family units, where inconsistencies arose in account start dates, where households moved in or out of houses, and for accounts that had more than one missing value for each of the three years to ensure that these accounts represent year-round occupants. (2) The resulting data set included 2,613 household accounts, single-family homes with the same year-round occupants across the full three-year period. (3) 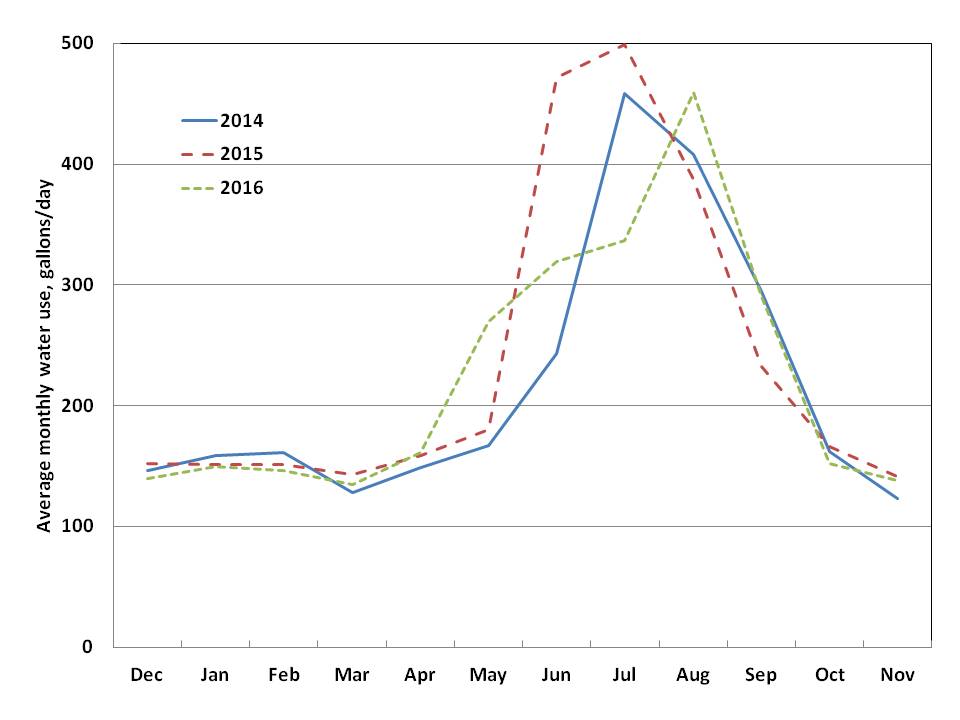 Fig. 1. Monthly water use for single-family residential customers in Lynden, 2014 through 2016.

Results
The month-to-month pattern of usage is consistent across the three years of analysis (Fig. 1). Summer usage is roughly three times greater than winter usage. (4)

Although baseline (i.e., non-summer) use is similar for all three years, summer usage is highest for 2015 (a drought year). In particular, summer usage averaged 400 gallons per day (gpd) in 2015, compared with about 350 gpd for the other two years. 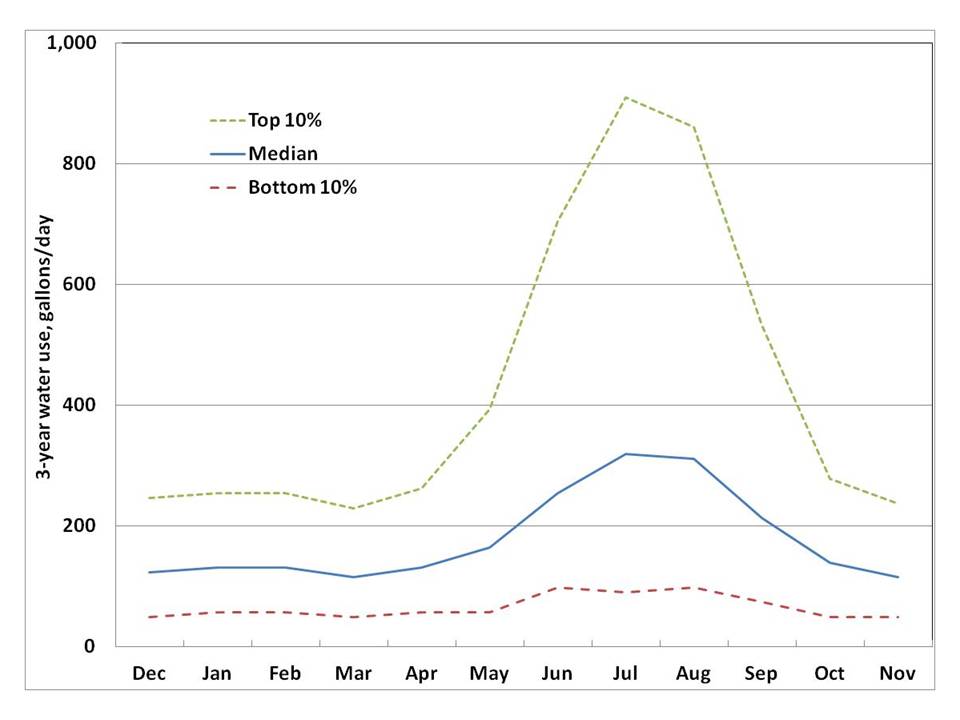 The variation in monthly water use across households, the focus of this paper, is striking. (Fig. 2) shows monthly water use for three sets of households — at the bottom 10 percent of the distribution, the median, and the top 10 percent. (5) The low water users show relatively little variation in seasonal water use; their monthly outdoor water use is about two-thirds of their monthly base water use. (6) For the top 10 percent, however, the picture is very different. These high users show dramatic month-to-month differences, with outdoor water use almost double (180 percent of) base use.

Finally, those who use lots water one summer are very likely to do the same during other summers. Consider those households in the top 10 percent of 2014 summer water use: 66 percent were in the same category for 2015 and 64 percent for 2016. In other words, households tend to be consistent in their water use from year to year.

Implications for Efficiency Programs
Household water use is a function of two broad factors: equipment and behavior. Homes with more water-using fixtures and inefficient appliances will use more water than those with fewer fixtures and more efficient appliances. Similarly, households, especially larger ones that take long showers or over-water their lawns, will use more water than those which are more efficiency conscious.

I had no information on the household occupants, the water-using equipment in the house, and the size and type of lawn, garden and yard, so I was not able to separate the effects of these factors on water use. Some of the differences observed here are due to family size, house age, equipment efficiency and size of the yard. And some of the difference among accounts is due to consumer behavior and attitudes towards efficiency. A utility interested in sharpening its water-use efficiency program could conduct surveys of its customers to better understand these characteristics.

The results presented here suggest that focusing on high users is likely to be much more effective and cost effective than undifferentiated efficiency programs that encompass all customers. And focusing on summer, primarily outdoor water use is much more important than addressing overall water use. For example, cutting summer outdoor use by 10 percent across all homes would save about 14 gpd per household. However, reducing water use for the top 10 percent of homes down to the median level would save 30 gpd per household, more than double the savings for the average home. And the cost to run such a targeted program would be much less than for one that addresses all customers.

Some Ways to Do It
These results clearly show that households are not created equal. Indeed, substantial variation in water use occurs among these nominally similar accounts. The differences in summer water use are especially dramatic and offer a major opportunity for efficiency gains. That is, programs that seek to reduce summer outdoor water use should focus on these high users.

These results also suggest important improvements in water rate design. Inclining blocks, in which the price of water increases as you use more water, provide a strong economic incentive to use water efficiently. The initial price could be set low enough to cover base, or indoor, water use for the median household. The second (higher) price could cover the estimated outdoor water use for the median household. And a third (still higher) price could cover all water use above that amount. Lynden’s rates increase from 21 cents per 100 gallons per day to 28 cents at about 120 gpd, and then increase again to 42 cents at about 440 gpd (Fig. 3). 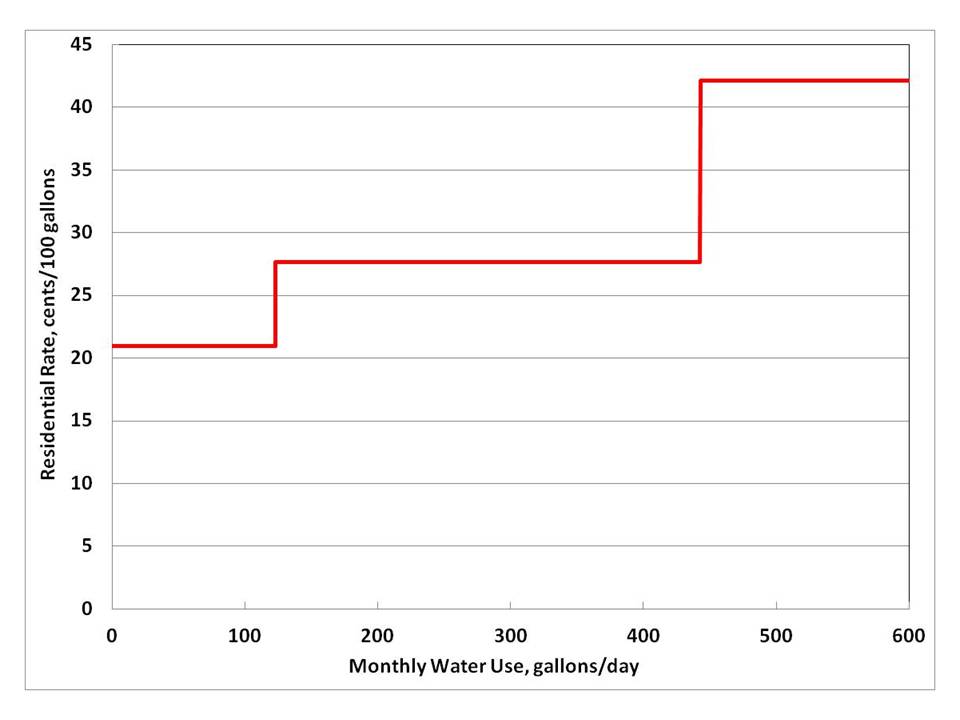 In addition to saving water, focusing on high users and peak summer demand will lower water and wastewater utility capital costs. That is, less money will need to be spent to increase capacity in pipes, pumps, water treatment and sewage treatment if peak demand is cut. Operating costs will also be cut.

Finally, these large variations in water use among customers in the same class likely apply to other sectors. That is, similar gains in efficiency programs could likely be achieved in the commercial, industrial, and agricultural sectors by focusing on the small number of very high users.

2. Some Lynden residents are “snowbirds” who live in Lynden during the summer but live elsewhere during the winter. These snowbirds were excluded from this analysis.

3. I have no information on the number of occupants, the number and characteristics of water-using equipment, or of the property size (including lawns and gardens) associated with these single-family residential accounts.

4. I define summer as the four months June through September, based on the patterns shown by the data.

5. The median is the middle point of a number set, in which half the numbers are above the median and half are below.

Eric Hirst moved to Bellingham in 2002. He has a Ph.D. in engineering from Stanford University, taught at Tuskegee Institute for two years, and then for 30 years worked at the Oak Ridge National Laboratory as a policy analyst on energy efficiency and the structure of the electricity industry. He has spent the last eight years of his career as a consultant.