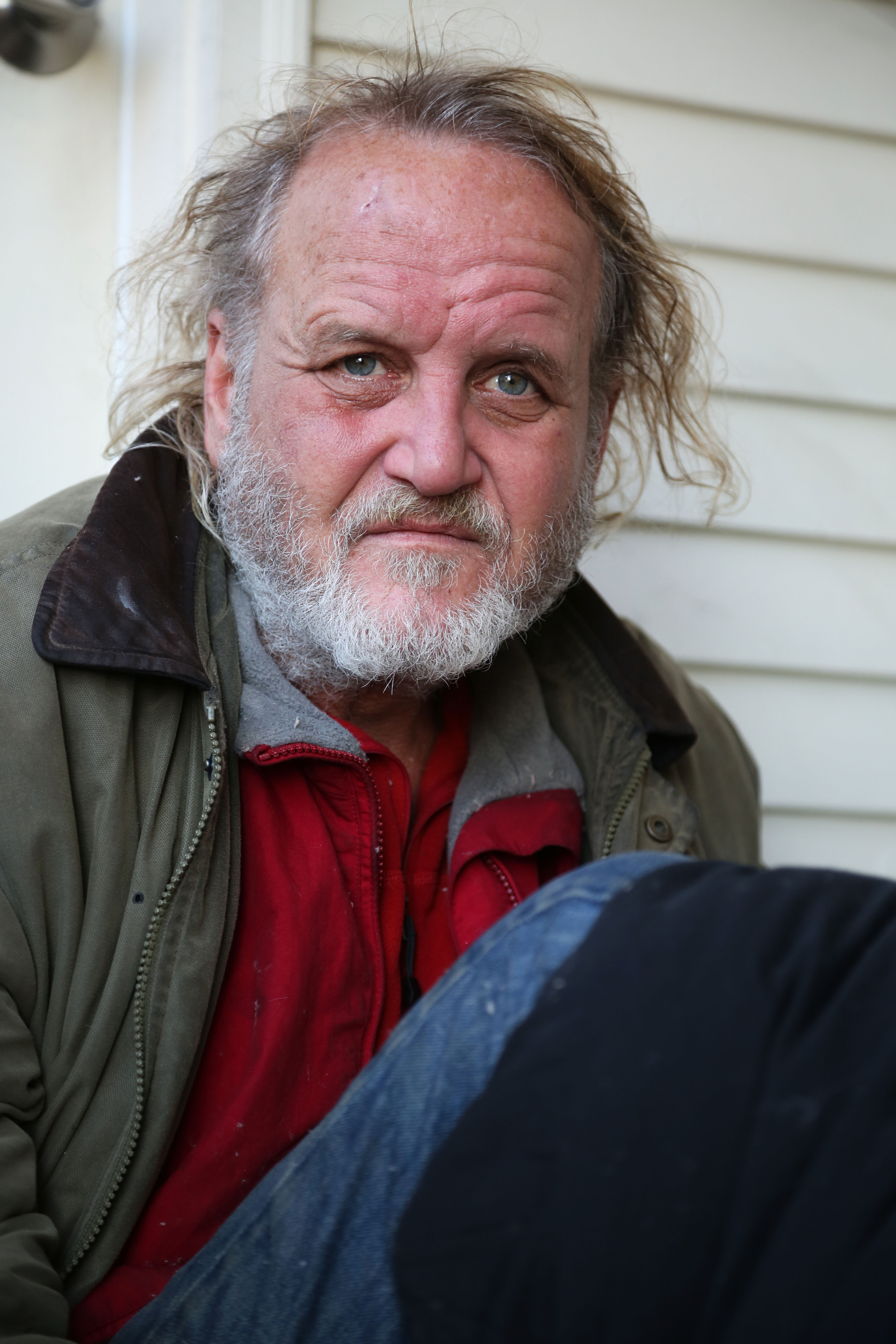 Dennis Crawford, 52, a resident of Bellingham, Washington, sits on the door stoop he was occupying as of Jan. 10, 2016. Dennis’s favorite part about living in Bellingham is the support system between people living on the streets. 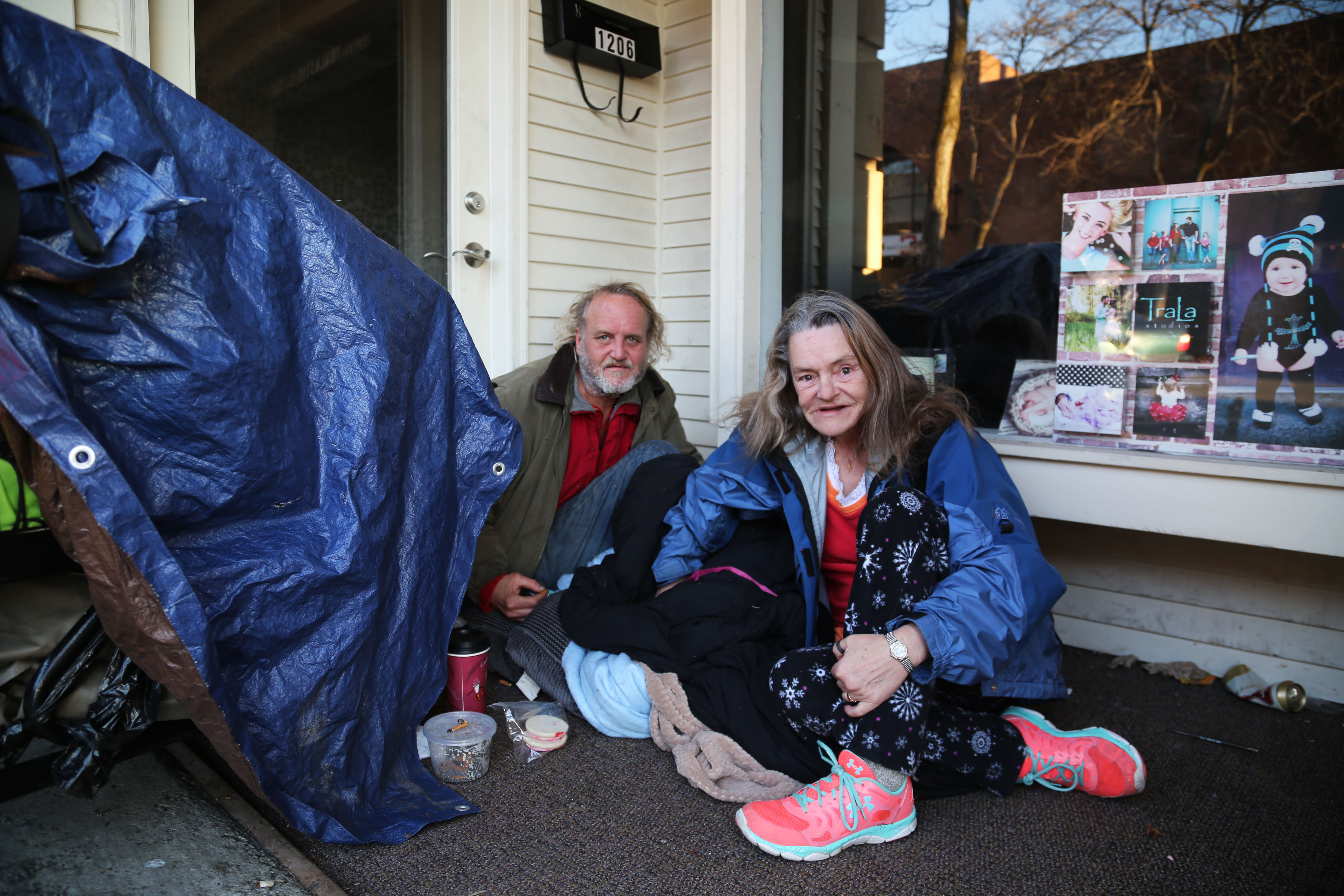 Anita Johnson, 67, and Dennis Crawford, 53, sit on a door stoop in Bellingham on January 10, 2016. Once on the streets, Johnson has found housing at Francis Place, a supportive housing facility, while Crawford remains homeless. 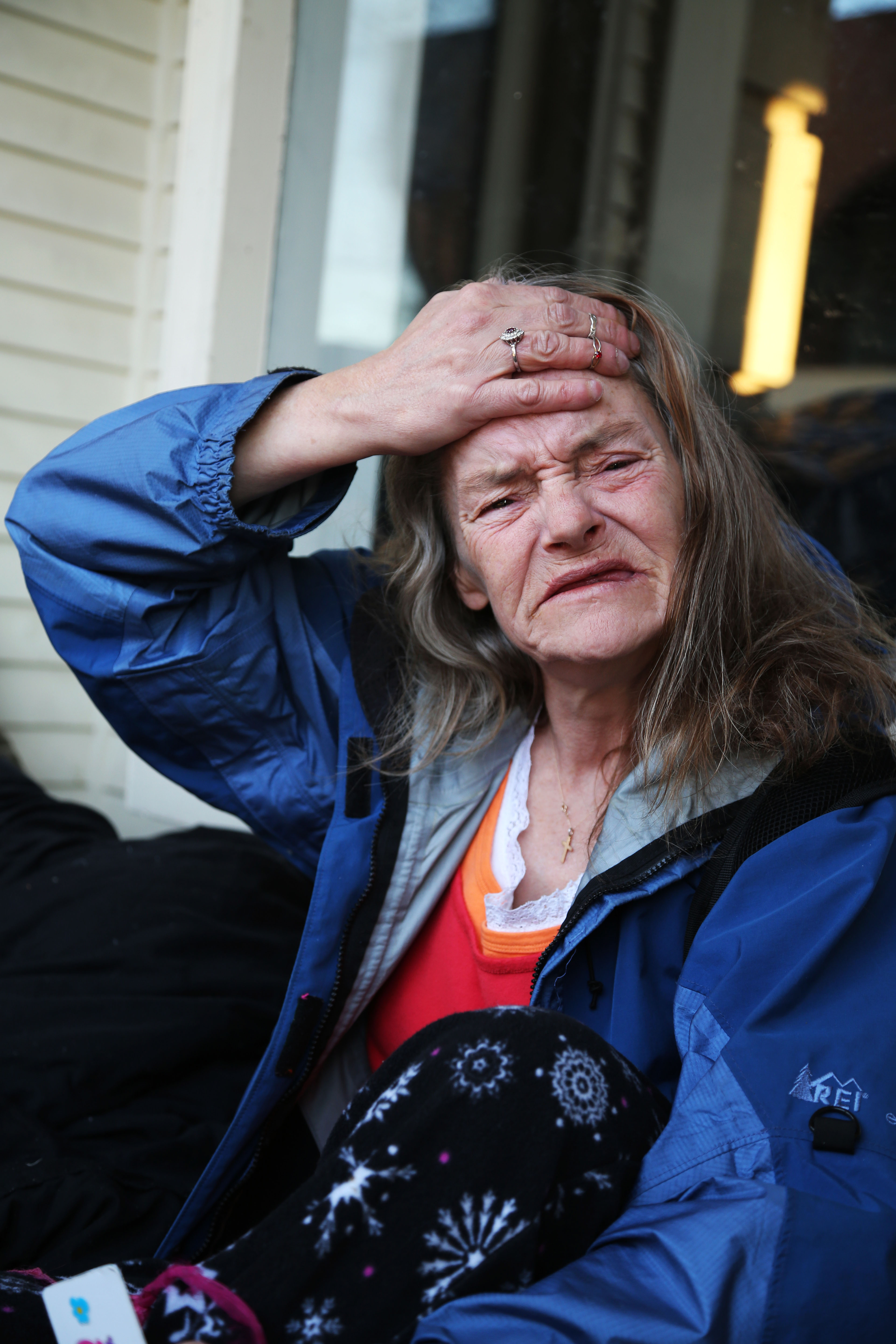 Anita Johnson, 69, of Bellingham, Washington, grimaces as she speaks about her recently passed mother, on Jan. 10, 2016. Anita was living on the streets for a while but found a place to stay at Francis Place, an apartment complex for the homeless. 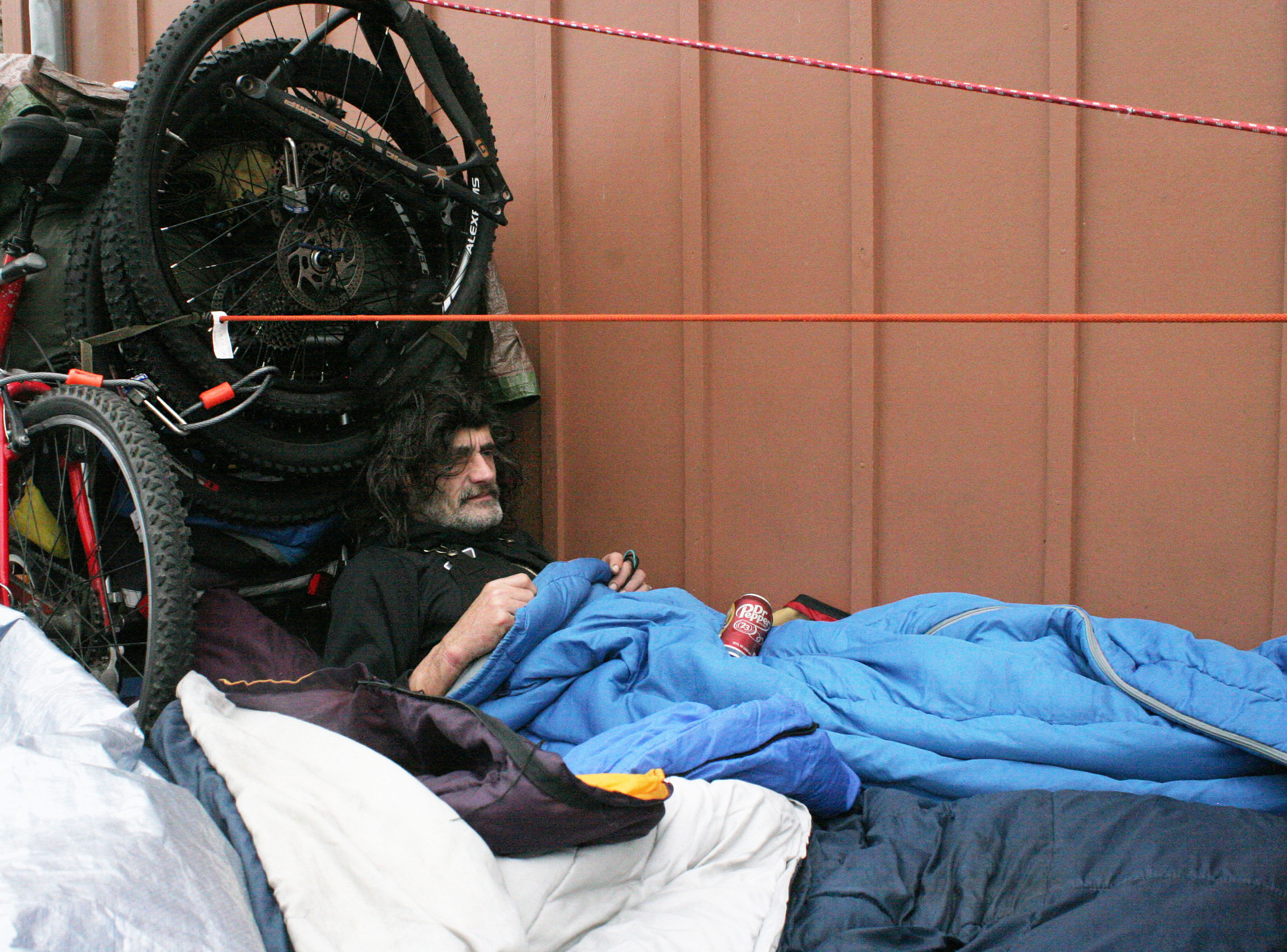 Bob Ables, 51, lies in a sleeping bag amongst all of his belongings in his temporary encampment at Maritime Heritage Park in Bellingham, Washington. As of Jan. 21, 2016, Ables and his girlfriend, Cat Abel, 46, were moving their camp to a different location every 48 hours, generally due to rain or theft. 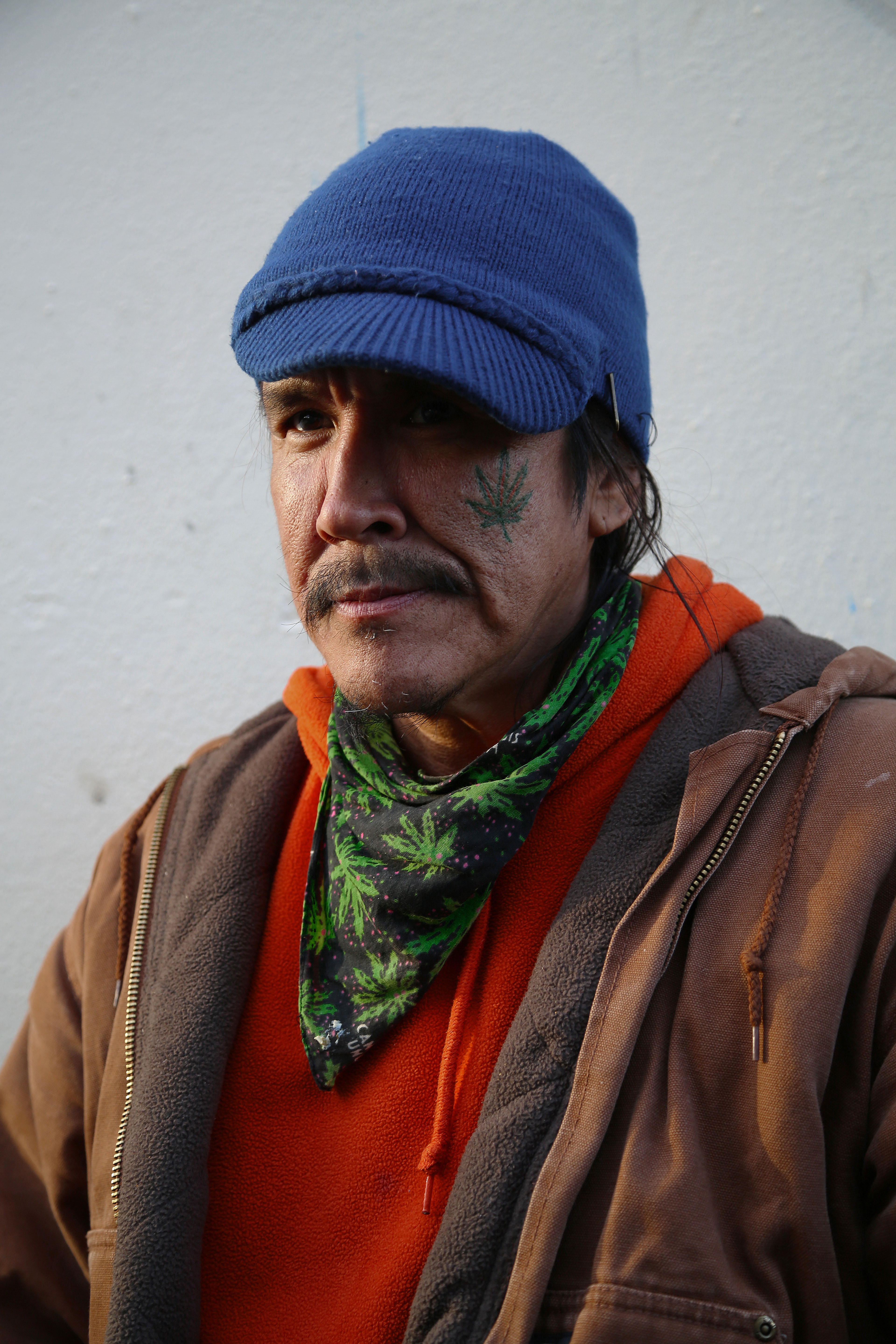 Nicky Hashbarger, 52, a resident of Bellingham, Washington, is currently living on the streets and trying to get a job. He has a lot of love for the people in Bellingham, as stated on Jan. 13, 2016; they are his favorite part about living here. 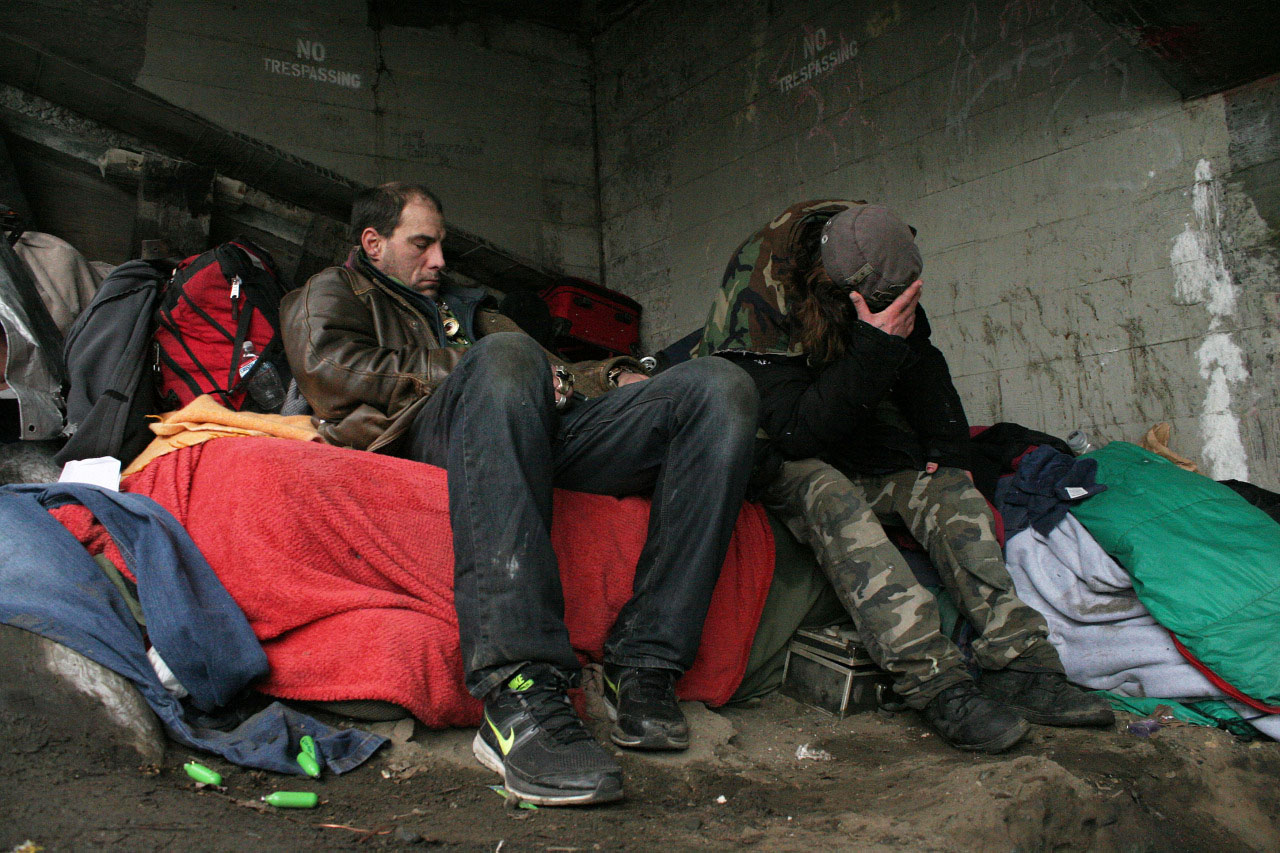 Josiah Dunne, 39, and Brandy Kiliminjaro, 43, sit under the bridge that they are living beneath at Maritime Heritage Park in Bellingham, Washington, on Jan. 21, 2016. Life under a bridge requires a strong sense of resilience.

Katy Cossette is a visual journalism pre-major at Western Washington University. She is interested in covering environmental and human rights issues. She is currently a staff photographer at “The Planet Magazine,” a student-run environmental publication at WWU. In the Spring issue of “The Planet Magazine,” she covers The Jungle, a controversial homeless encampment under Interstate 5 in Seattle, Washington, as well as PCB contamination in Seattle’s Duwamish River.

She pursues homelessness because she feels drawn to documenting the lives of people who are struggling to function as regular members of society due to loss of employment, mental or physical illness, substance abuse, and an overall increased vulnerability.

Through photojournalism, she hopes to share the stories of people living on the streets in order to inspire an increased public consciousness for their situations. She shoots with a Canon EOS 5D Mark III, and lightly edits with Photoshop.