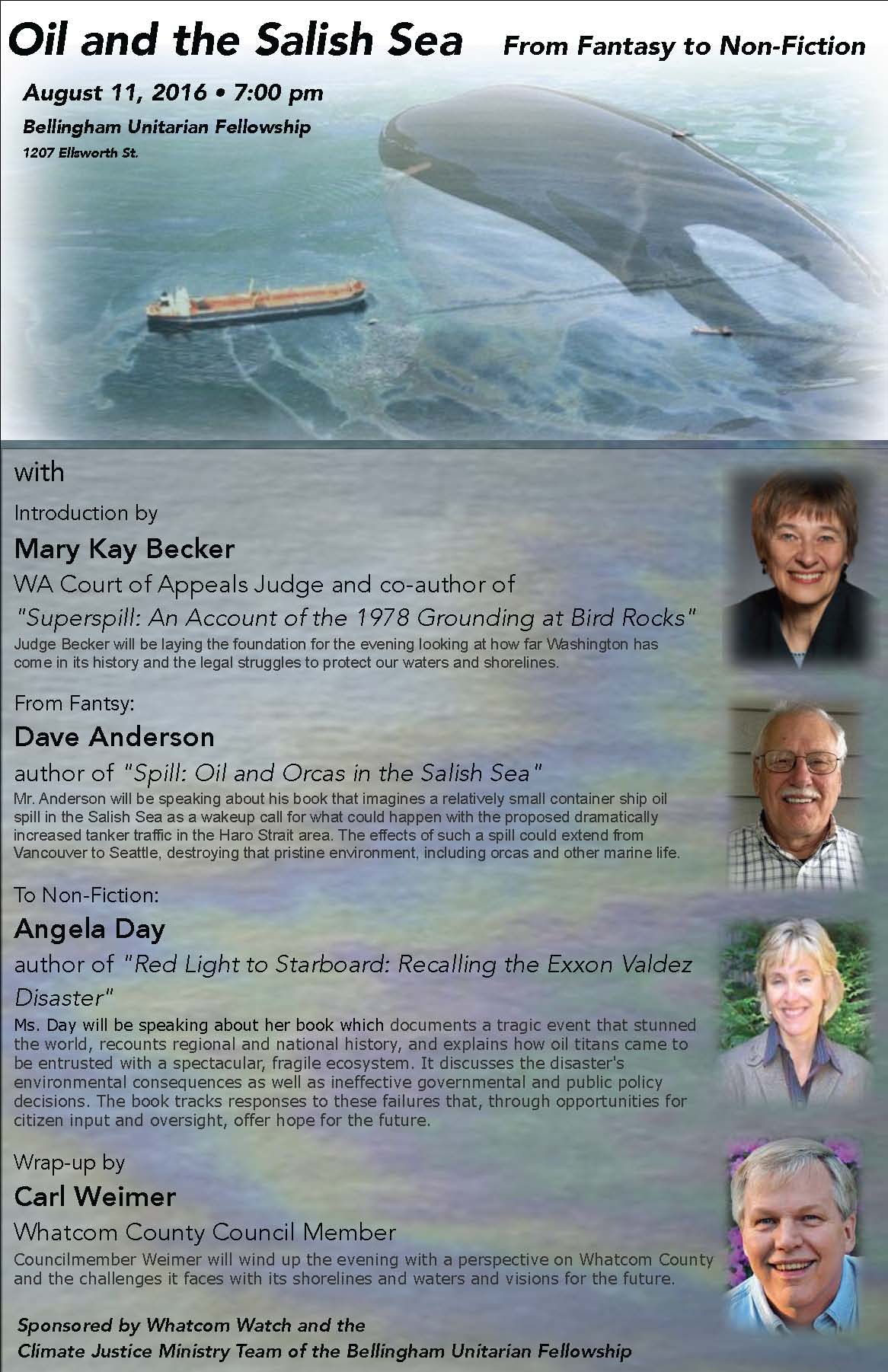 In August and September, the Totem Pole Journey (totempolejourney.com) will continue the legacy of previous Journeys of drawing on, expanding, and energizing alliances in one of the most crucial years for First and American Indian Nations across the United States and Canada.

Here in Whatcom County, the U.S. Army Corps of Engineers honored Lummi Nation’s request that it deny federal permits for the proposed GPT at Xwe’chi’eXen based on the project’s violation of treaty rights. It is critical not to assume that this is a done deal, that Xwe’chi’eXen is safe from further development threats. It is imperative to keep the issue in the consciousness of the general public given the pushback from the fossil fuel industries and other project proponents taking the form of modified proposals, legal actions, local and national legislative initiatives, and other tactics used to circumvent and undermine Treaty Rights. Also, for each project we stay or defeat, several others crop up in their place.
So while Xwe’chi’eXen and the Cherry Point Aquatic Reserve are safe for the moment, things could change quickly to put them at risk once again. That is why many concerned citizens are expanding their efforts into other arenas including putting forward changes to the Whatcom Comprehensive Plan. Councilmember Carl Weimer has proposed changes to the Cherry Point Urban Growth Area to both the Planning Commission and the County Council. Those amendments would help protect the future of Xwe’chi’eXen and the Cherry Point Aquatic Reserve.

Elsewhere In the region, the Longview coal export proposal has yet to be defeated and the Quinault are actively opposing the Westway oil terminal in Grays Harbor. There is the extraction and transport of oil in trains across the country to the Pacific Northwest from, through and to Tribal territories and sacred lands. There are new development and expansion projects for gas, oil and other petrochemicals coming from other places including a proposed LNG pipeline running from Alberta through Sumas and Lynden to Cherry Point out to Vancouver Island. While the Northern Gateway Pipeline in British Columbia has stalled, a daunting number of existing and proposed fossil fuel projects criss-crossing the U.S./Canadian border still threaten to impact First Nations interests on both sides of the border.

The Totem Journey brings hope, healing and unity in the face of these challenges. At the end, the Totem Pole will find its home in the city of Winnipeg in the Manitoba Province of Canada. Winnipeg is facing off with TransCanada over the Energy East pipeline, which will carry diluted bitumen (tar sands) from Alberta to Winnipeg then onto Quebec and New Brunswick. The length of the Energy East pipeline alone could impact up to as many as 52 First Nations communities. It poses serious risks to Anishinaabek Treaty 3 First Nations territory and passes near the source of Winnipeg’s drinking water. Winnipeg is also home to the largest urban indigenous population in Canada and the second largest on the North American continent.

The Journey acknowledges the devastating impacts on the Earth and within diverse communities by of these projects. They transgress with impunity across state lines in the United States, across international borders and through Tribal communities. They include the extraction and transportation lanes of the Bakken oil fields and the pipelines carrying Alberta tar sands to crisscross the international border from Washington, Oregon and British Columbia in the Pacific Northwest, across the Great Lakes region, and in the Northeast.

Deb Cruz is a member of the Native American Connections Ministry Team of the Bellingham Unitarian Fellowship, and co-coordinator of the August 11 program.