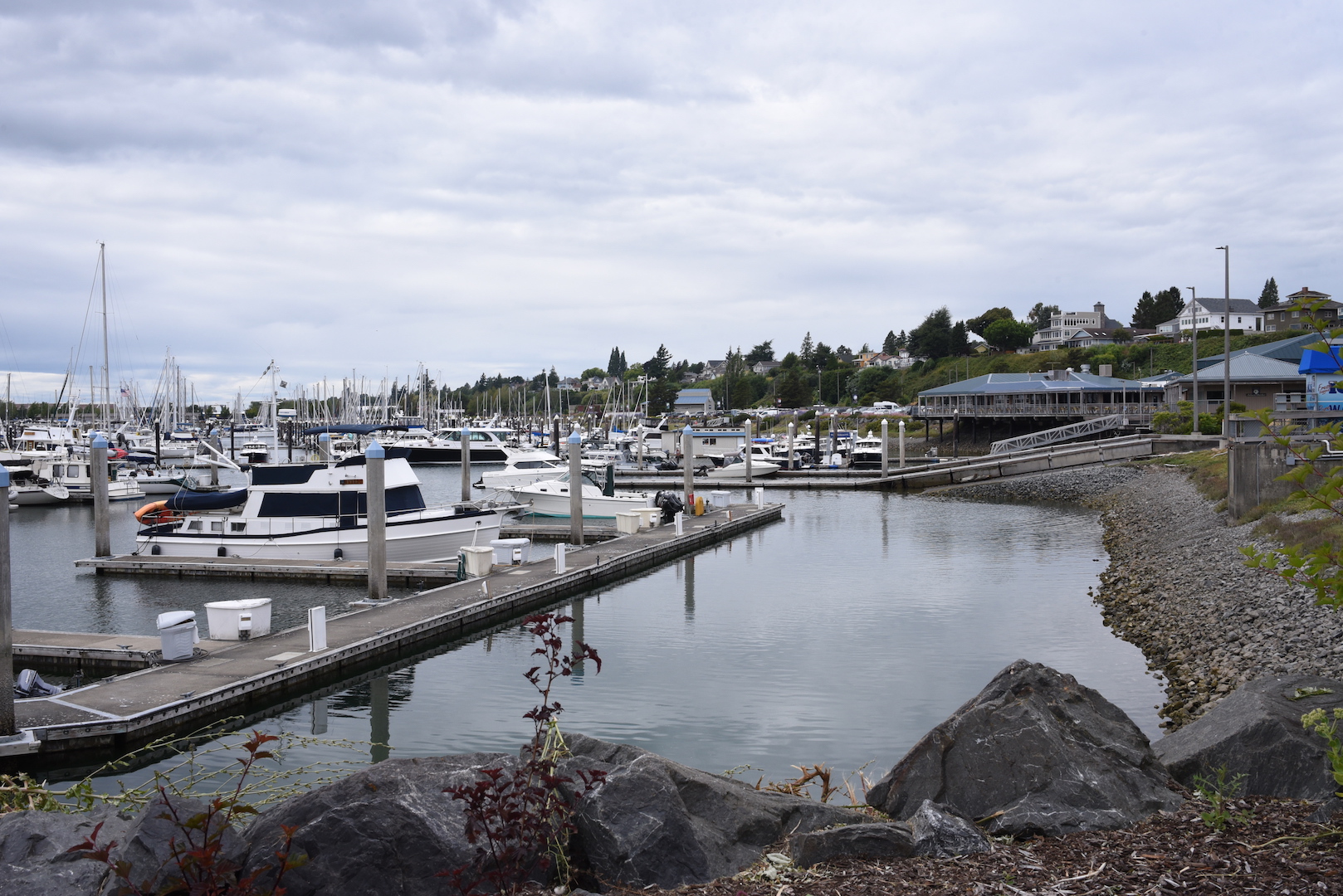 The invasive species was found in a Squalicum Harbor trap.

It’s not news that European green crabs have been residing in Whatcom County for at least two years. However, the Port of Bellingham has confirmed the discovery of the city’s first live green crab in the waters of Squalicum Harbor. (5) The crab was found in June in a trap set by the Marine Life Center’s educational program, and multiple others were found just days later. (5) The first evidence of a green crab in Bellingham was discovered in May 2019 when the carcass of one was found being eaten by a seagull in Squalicum Harbor. (7)

Whatcom County has more severe green crab populations in Lummi Bay and Drayton Harbor. (7) To date, over 3,500 green crabs have been captured by the Lummi Natural Resources Department. The crabs have also been found in Samish Bay, Mud Bay, and Chuckanut Bay. As of now, the most abundant population of green crabs in Whatcom County has been captured in the Lummi Sea Pond within Lummi Bay. (11)

The Lummi Natural Resources Department has been taking action against this invasion on reservation tidelands since October 2019. These actions include field trials of trapping female green crabs in the winter, a community-wide outreach and green crab education campaign, and collaborative efforts with the Washington Department of Fish and Wildlife, Washington Sea Grant, and University of Washington. (11)

What Are European Green Crabs?
European green crabs (Carcinus maenas) are a highly invasive species found globally that has origins in Europe and northern Africa. They are found on both coasts of the United States and were first confirmed in Washington state in 1998. (1)

Green crabs are known for destroying the habitats in which they reside and the native species that live there. Green crabs like muddy or rocky shorelines, such as salt marshes and pocket estuaries (2), and can tolerate a wide range of climates, temperatures, and salinities. (10) They can often be found burrowed in sand or in the tide line debris of algae, kelp, and trash. (3) 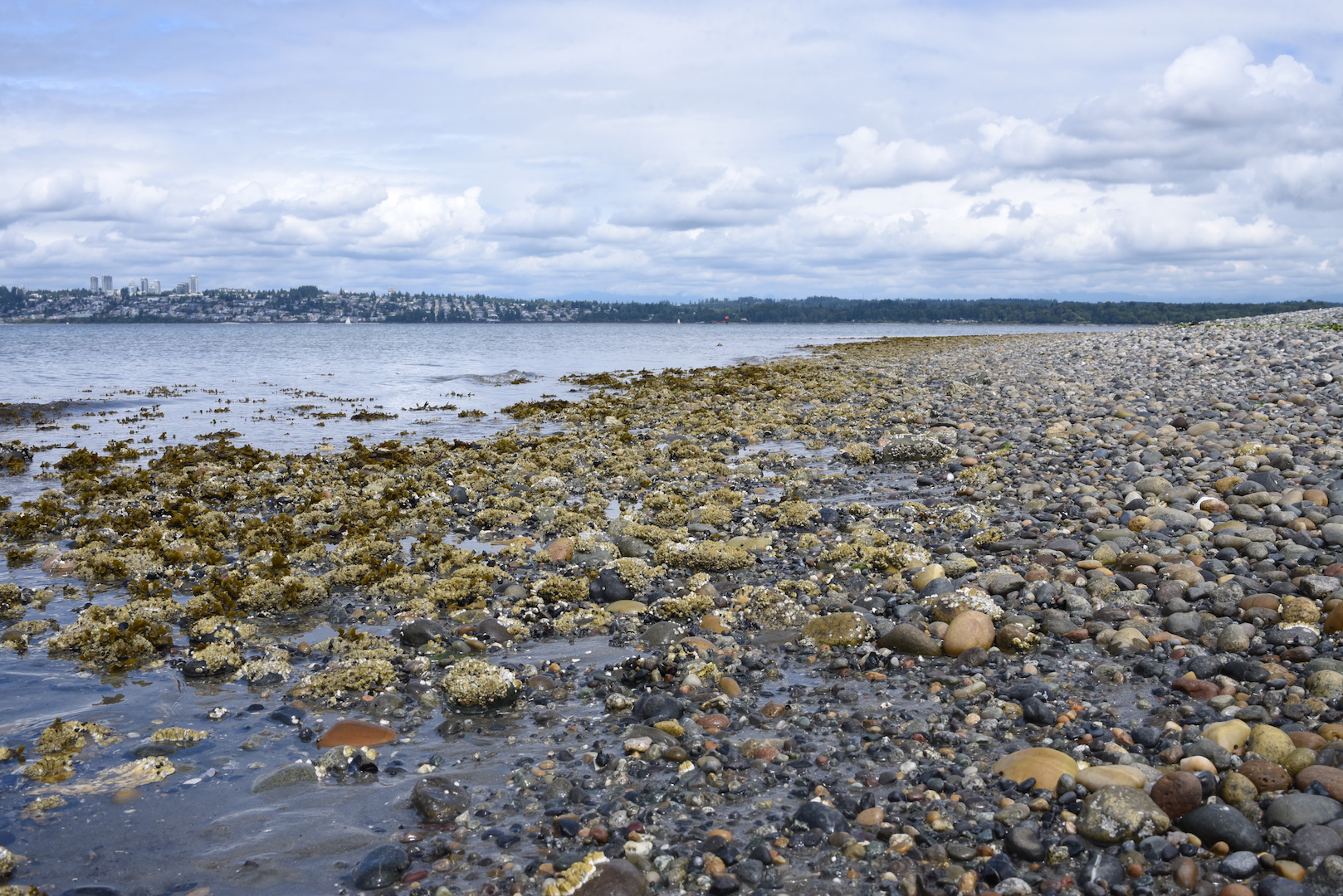 Drayton Harbor in Blaine, Washington, was one of the first sites in Whatcom County where European green crabs were discovered. Photo by Faith Owens.

The shallow habitats that green crabs prefer are often sensitive and highly important. Salt marshes provide an ecosystem of nurseries for salmon and Dungeness crabs and are feeding grounds for migratory birds. Eelgrass beds provide habitat for salmonids, crab, herring, shellfish, shrimp, and waterfowl. Green crabs uproot the grass to eat it, essentially diminishing the habitat used by these key Salish Sea species. (4)

Green crabs have had an enormous impact on native shellfish such as small shore crabs, clams, and small oysters, which are vital to tribal, recreational, and commercial harvest. (4) To date, green crabs have not had a direct impact on the Lummi Shellfish Hatchery or the salmon hatchery, even though both hatcheries are located in a green crab hotspot. This success is due to efforts from the Lummi hatcheries’ systems, which include monitoring, adequate filtration, and controlled seawater intakes. If green crabs were to invade the hatcheries, Lummi may have to entirely adjust its hatchery operations. (11)

Not only are green crabs fast, aggressive hunters, but they have few predators to help control their population. (8) They are unforgiving predators — they can dig at least six inches for oysters and can eat up to 40 small clams a day. (2) They have a diverse diet, so if one of their food sources runs out, it will likely not affect them and they will simply move on to the next available meal. (10)

How to Manage Green Crabs
The best way to reduce green crab populations is to find and remove them early. (4) Females can spawn up to 18,500 eggs at a time and breed up to three times a year. Their free-swimming larvae lead to easy spreading. Eradicating individuals from populations early on can help control and possibly remove green crabs from invaded areas. (9)

Early detection and removal is mostly done by trapping. Currently, traps are being set at the mouths of rivers and streams of infected sites, like Drayton Harbor. Fifty to 70 traps will be set two to four times a week. (10) Fencing is another method to help prevent spread. (9)

The Lummi Natural Resources Department alternates between two types of traps: cylindrical minnow-style traps and Fukui traps. The cylindrical trap is meant for smaller crabs, and the Fukui trap is meant for capturing larger ones. Prime trapping season occurs from April through September of each year. (11) During this time, members of Washington Sea Grant’s Crab Team search multiple sites for signs of invasion and currently focus on inland waters because they’re most susceptible. (4)

To reduce the risk of spread, the Washington Department of Fish and Wildlife requires a permit to import or transport any shellfish moving from an area where green crabs are found. (2)

How to Identify Green Crabs
Green crabs aren’t necessarily always green — their color can vary from red to splotchy green and yellow with orange marks. Their underside can be off-white, yellow, or red. At their largest, they can be four inches across, but are often smaller. (2) 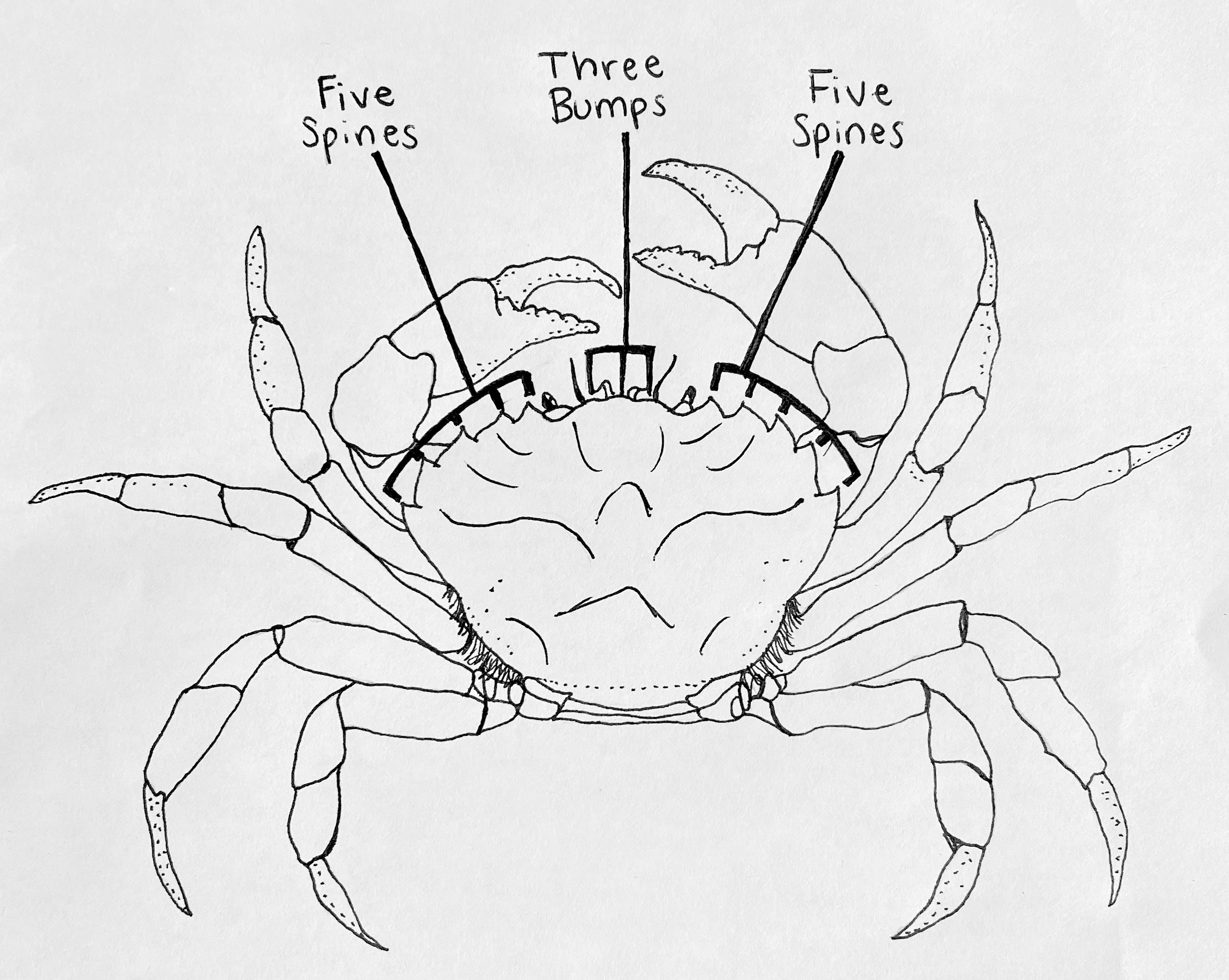 Green crabs can be easily identified by the five spines on either side of their eye, which is unlike native crabs.
Illustration by Faith Owens.

The telling characteristic of green crabs is their marginal teeth, often known as spines. They have five spines on each side of their eyes (2) — native crabs have more or less than five. Green crabs have three bumps in between their eyes, and their last pair of legs is slightly flattened. (9)

Report Sightings
If you find a green crab, please use the following sources to report it:

Karl Mueller, a representative of the Lummi Natural Resources Department, said that 2021 will be a watershed year for the direction of the green crab invasion. (11)

“To say that our collective trapping effort, between the affected tribes, our state partners, and the shellfish industry, is all that stands between invasive European green crab and normal ecosystem function, here, within our shared waters of the Salish Sea, is not entirely hyperbole.”