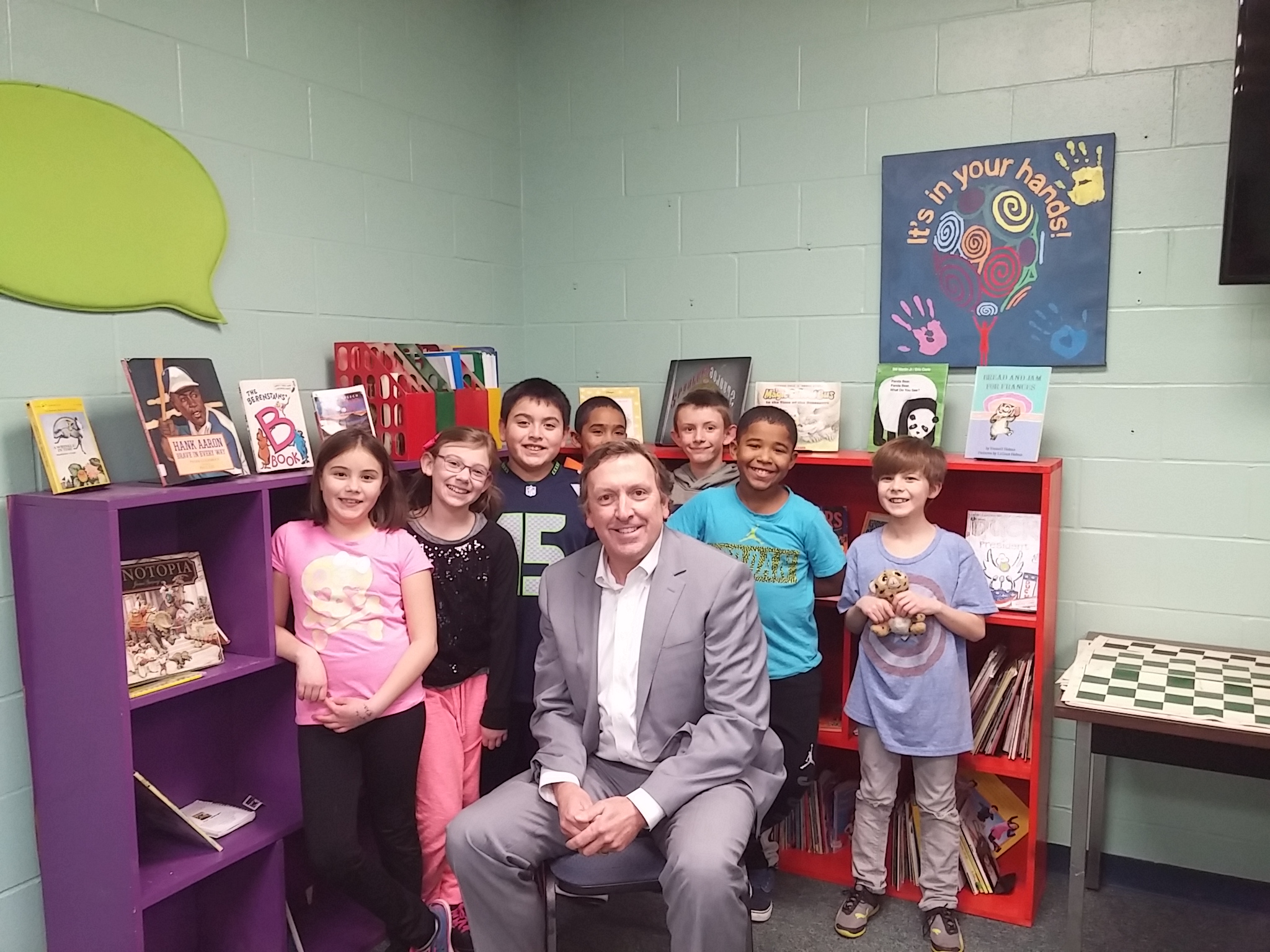 Erik Dyrland with some kids at the Boys and Girls Club on Kentucky Street.
photo: Jeff Judkins

The mission of the Boys & Girls Clubs of Whatcom County (Bellingham, Ferndale, Lynden and Blaine) is to enable all young people, especially those who need us most, to reach their full potential as productive, caring, responsible citizens. (taken from the website)

Erik Dyrland is an owner of a Farmer’s Insurance agency locally and is a long-term board member for the Boys and Girls Club in Whatcom County. Born and raised in Bellingham, he and his wife have one son and one daughter.

Kathryn Fentress: Please tell me a little about yourself, how you came into your business and how you came to the club.
Erik Dyrland: After attending Whatcom Community College and Western, a friend offered me an opportunity to start a Farmers Insurance agency and this is now my 30th year in business. The thing that is interesting about this job is that every interaction is a different opportunity to help people with their insurance needs and their financial products. I enjoy the variety in the challenges that go on in the day. I love to fix stuff and help people with their problems. I think of myself as an advisor rather than a sales person.

I would guess that people appreciate your approach. When did you learn about the Boys Club?
When I was in fifth grade, a couple of friends showed up one day with football uniforms on. They told me they had joined football at the Boys Club.

So who were the kids that came in the beginning?
There was only one club meeting place and it was on Holly Street. I lived too far away to hang out there very often. Parents would sometimes drop us off on the weekends but most of my involvement was through the football and basketball programs. The club offered a place for social connections and playing pool and other games and activities. The kids from the lettered streets were the ones that attended most. The team sports were after school and mostly at the school you attended. We played football and basketball and usually with the same coach for both.

Sounds like being outdoors and active was healthy for you. Did you continue on into high school?
Yes, and with the same group of people. A lot of them are still friends today. One of my coaches was Terry Todd, owner of the Sunset Car Wash. He is a great guy, now in his 80s. He coached his own kids and the rest of us and eventually became a coach at Western. It was a great group of kids and dads and a very positive experience for all of us. Many of the current community leaders in Bellingham were part of the club.

How did you become involved as an adult?
When I was at Western, I did a little coaching of boys in the club, even helped with the girls’ team. Later on, my nephews started getting involved so I coached their teams. Then one of the resource people in the club asked me to help start an alumni association for the club. The first or second year I was president of the alumni, I was asked to be on the board of the club, and I have been on it ever since — about 20 years. I am currently finishing up as president at end of my term but will stay on the board. I will always help with the club even when I eventually step down from the board.

What is your role on the board?
Sharing the club’s story, raising money, explaining to people what the club is about, and trying to get other people involved in the club as board members or volunteers. We’ve built two buildings since I’ve been involved. We now have an annual budget of about $2,000,000. We have very small annual fee for membership. We are lucky to have so many people in this community who give to the clubs, but there are so many great organizations in our community that raising enough money is still tough.

Many folks may not know about the program. What kinds of activities are offered now?
Our programs are structured around education and fun. By learning computer codes, building volcanic science projects, or participating in our athletic programs, our club kids build character, stay healthy and develop relationships with role models who truly care. We have four clubs now in Bellingham, Ferndale, Lynden and Blaine and over 6,000 Whatcom County kids are members of the clubs. We’re particularly proud of our nutrition program, which provides a free, healthy meal and snack every day to any member who is hungry. In 2015, that was over 79,000 meals!

We also produce several large events, including a breakfast fund raiser in the fall and an auction in the spring. We are also looking for more volunteers for mentoring, chaperoning and coaching.

What do you do to keep your spirits up?
There always seems to be an inspiring story. In January we sponsor a Youth of The Year Award in Ferndale. The youth prepare speeches and judges from the community outside the Board select one. The older kids help prepare the younger ones for the future presentations. These speeches are always very inspiring. I am also supported by many of the friendships I established through the club that continue in my life today.

About 20 years ago, we scored a bunch of tickets to the Mariners game in Seattle. So we took a busload of kids and volunteers and adults chaperoning. As we were crossing the bridge into downtown Seattle, we noticed one of the girls was quietly crying, so one of the women looked in on her. The girl was OK; her tears were happy ones. This was the first time she had ever been out of Bellingham, and she thought she would never see the Seattle Space Needle. This kind of story hooks you. Some kids have no voice. So it is important to have clubs like ours and advocates for the kids who need us in the way we offer them opportunities. This is what drives me, to continue to be a voice for those kids, kids like that who thought they would never get to see the Space Needle.