Defending Freedom of the Press

“We’re in the truth business, and the knowledge business, not the entertainment business.”
— Pete Hamill, longtime journalist and author of “News Is a Verb: Journalism at the End of the Twentieth Century.”

With election season nearing, you’ve probably been hearing candidates talk about how they will create sustainable jobs and address affordable housing (or lack thereof), rising health care costs, Lake Whatcom drinking water, and new jail campaign reform, among other issues that affect Whatcom County and beyond.

What you probably haven’t discussed with your candidates — local and national — is how they feel about today’s media. Have they spoken about threats against journalists as part of their campaign? Have you attended a town hall meeting and asked a candidate: “How do you plan to protect, preserve and defend the press?”

While the First Amendment is a pertinent and timely civic topic during any election, press, speech and expression typically don’t make the cut when it comes to the list of questions for political candidates. During these midterm elections however, the tide may change as some journalism organizations are banding together to alter the public discourse and get the First Amendment, specifically the part of about freedom of the press, in front of voters and candidates alike.

Using the social media hashtag #DefendPressFreedom, the Society of Professional Journalists, Reporters Without Borders and a slew of other media organizations are urging voters to contact candidates — by phone, snail mail, email, town hall meeting and on Facebook and Twitter — and ask them point-blank where they stand on press freedom. Borrowing from a #DefendPressFreedom prepared script, voters can say or write: “I have become increasingly concerned with the growing climate of hostility for journalists in this country, and I would like for [candidate/representative] to publicly address what they will do to defend press freedom if [he/she] is elected.” (For more information on how to ask candidates about their stance on freedom of the press: https://rsf.org/en/defendpressfreedom.)

Before you accuse the press of bipartisan antics, the #DefendPressFreedom campaign aims to be neutral — it’s for both sides of the aisle, because the media affect everyone, no matter their politics, according to Margaux Ewen, Reporters Without Borders North America Director. “In a democracy like the United States, no journalist should be arrested, assaulted or threatened for simply doing their job,” she said in a Sept. 13 announcement for #DefendPressFreedom.

Press Under Threat
Unfortunately, threats, assaults and murder — methods of censorship more common in repressive regimes like Cuba, Mexico, Pakistan than the United States — have arrived on the doorstep of American media. On June 28, five newspaper employees of the Capital Gazette were killed in a targeted attack in their newsroom in Annapolis, Md. The suspect, who was charged with five counts of first-degree murder, allegedly had a grudge with the newspaper. In August 2015, in Roanoke, Va., a disgruntled former colleague killed WDBJ7 reporter Alison Parker and cameraman Adam Ward during a live broadcast.

As egregious as these violent attacks on the media are, verbal threats and social media posts have also created a stifling atmosphere in recent years. President Trump’s repeated references to the media as “fake news” and “the enemy” further erodes credibility. In its latest report on press freedom in the United States, Reporters Without Borders said constant pressure on newspeople can lead to self-censorship and ultimately, thwart the public’s right to know.

“The violent anti-press rhetoric from the highest level of the U.S. government has been coupled with an increase in the number of press freedom violations at the local level as journalists run the risk of arrest for covering protests or simply attempting to ask public officials questions,” the report stated.

Public Trust All-Time High in the 1970s
“Fiction is an act of the imagination, whereas journalism is an act of witness.” — Pete Hamill

In 1972, as Gallup polling began querying the public about its level of trust in the media, it used the following question to gauge attitudes: “In general, how much trust and confidence do you have in the mass media — such as newspapers, TV and radio — when it comes to reporting the news fully and fairly (i.e., a great deal, a fair amount, not very much or none at all?).”

Thanks in part to two stalwart reporters known as Woodward and Bernstein, along with The Washington Post, The New York Times and investigative reporting on the Vietnam War, Americans’ trust in media peaked in 1976 (at 72 percent). However, by the late 1990s, public trust, as reported by Gallup, dipped into the 50-percent range and has fallen further to 41 percent in 2017 (see Gallup Report, “Democrats’ Confidence in Mass Media Rises Sharply From 2016,” Sept. 21, 2017: https://news.gallup.com/poll/219824/democrats-confidence-mass-media-rises-sharply-2016.aspx.)

As the media are pummeled and repeatedly challenged on newsroom tactics, the question remains: how can members of the public trust what they read, see and hear? Concurrently, how can reporters build confidence in their audience? (See “Building Trust Between Journalists and the Public.”)

To address the trust question, and to show solidarity in the news business, on August 16, The Boston Globe ran an editorial, “Journalists Are Not the Enemy,” calling on fellow op-ed writers “liberal and conservative, large and small” to respond to President Trump’s verbal attacks on the media. In an interview on NPR’s Morning Edition, The Boston Globe Deputy Managing Editor Marjorie Pritchard said she created the coordinated effort, “to put [reporters] into the public discourse and defend the First Amendment.”

Support was overwhelming as more than 300 newspapers, including The New York Times, The Dallas Morning News, The Denver Post, The Philadelphia Inquirer, the Chicago Sun–Times among others large and small across the United States, published editorials defending the right to inform. It was a show of solidarity and a reminder that a vibrant press is the foundation of a thriving democracy, the editorial boards resounded. However, some columnists turned down the invitation on the assigned day, assuring their readers that they too uphold the First Amendment but that they must remain independent in their dedication to press freedom. The Seattle Times, for instance, said it didn’t want to succumb to “pack journalism” (see The Seattle Times, Aug. 16, 2018: “Why no Seattle Times editorial saying we are not enemies of the people? We prove that every day,” by Kate Riley).

Other critics, like Columbia Journalism Review Editor Kyle Pope, said the show of unity was heartfelt and symbolic, but fell short of any lasting change. “There is a danger that it comes across as reporters whining about journalism or attacks on journalism,” Pope said on the August 17 episode of “The Kicker,” the CJR podcast. “If the goal is to convince people who aren’t now convinced, that protecting the free press is important … I’m not sure it will accomplish that.” 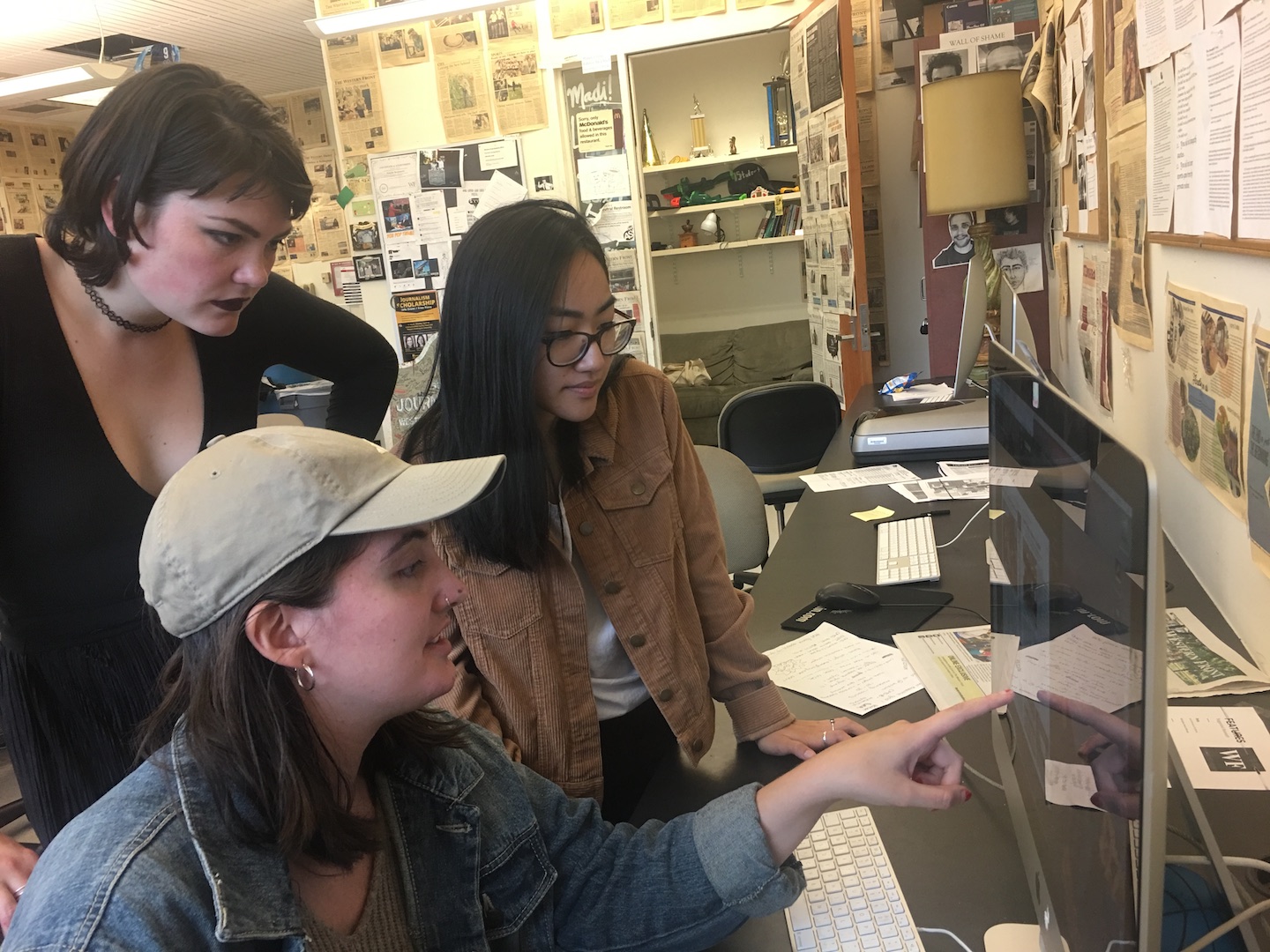 Western Front Editor in Chief Julia Furukawa (standing on left) collaborates on Sept. 21 with editors Gwen Roley (hat) and Kristina Rivera (glasses) in the WWU newsroom. They were producing the special “Welcome Back” edition of The Western Front.

Rigorous Editing
While we may be at a low point in journalism in terms of credibility with the public, readers need to be more discerning when consuming news, according to Jack Keith, longtime newspaperman and senior instructor at Western Washington University. The news landscape gets muddied when self-described bloggers publish information on the internet that is devoid of corroboration, fact-checking and editing — the basic tenets of journalism, he said.

“There are people who are not trained as professional journalists, so the overall quality that the public gets in terms of information isn’t as reliable,” he said during a phone interview on Sept. 20. Keith, who has served as faculty adviser for WWU’s student newspaper The Western Front for more than eight years, was with The Bellingham Herald for 17 years and The News Tribune in Tacoma for 10 years before joining WWU’s journalism department in 2006.

To remain trustworthy in the eyes of its readers, The Western Front employs a rigorous editing and fact-checking procedure on every news story, he said. Front reporters are expected to conduct interviews in-person and not rely on Facebook or Twitter for sourcing, added Julia Furukawa, the current editor in chief of The Western Front. Occasionally, an interview happens by email, but that’s a last resort to get the story, she said. “The reality is we can reach more people through social media and find sources, but the internet is a tool and a great resource,” she said in an interview at The Western Front. “Still, I would not accept anything less than an email” from a reporter when attributing information to a source.

Every publication, whether it’s a student newspaper, a weekly community outlet or The New York Times, has its own protocol for editing and publishing. The Horizon, Whatcom Community College’s student newspaper, has just two editors and three reporters on staff. “Five people pretty much do it all,” said Catherine Wallace, the faculty adviser who is available to guide students and answer questions.

Elizabeth Miller, a community member in Auburn, Wash., 30 miles south of Seattle, launched the online Auburn Examiner in December 2017. She said accuracy is more important than speed. “If a source is not credible or I cannot support a claim by multiple sources, I am not satisfied. Because of this, I have held stories back. I would rather a story be delayed and have our readers trust the content than rush a story and be wrong,” she said in an email interview.

Of course, every reporter’s job description includes the responsibility of verifying information, quotes and sources before sending their work to an editor. In the 1980s and 90s, when some news budgets were flush, newsrooms could afford to have a copy desk, the once-venerable cog in the editorial pipeline that has practically been eliminated amid news downsizing and cuts.

Today, however, editorial oversight seems to be lagging, according to freelance journalist Charles Pekow, who covers outdoor recreation, government and the beer industry in Bethesda, Md. In his experience, “a few publications hired professional fact checkers, or editors did some checking as part of the job. Other times, the task was delegated to interns. Now, I find stuff doesn’t get edited sometimes when it should,” he said in an email.

Family-owned Skagit Valley Herald declined to comment about its news process for this article. The Bellingham Herald, which is owned by The McClatchy Company, referred questions about copy editing and editorial newsroom procedures to its parent company headquarters in Washington D.C.

Young Journalists
While it may seem the news industry is under pressure and jobs are far from abundant, some students are gravitating toward journalism, shunning engineering, computer science and nursing — majors that typically garner higher salaries and better job security. Furukawa, The Western Front editor, is excited about graduating next year with her journalism degree and a Spanish minor. She has aspirations of traveling and interacting with people from other cultures. “Having another language broadens the people who you can connect with and talk about issues,” said Furukawa, who recently returned from studying in Guanajuato, Mexico. “My dream is to be a reporter in the field.”

Sources Contacted for This Article

Source Material Consulted
• “It’s Time for the Press to Stop Complaining — And to Start Fighting Back,” Sept. 3, 3018: https://www.theatlantic.com/ideas/archive/2018/09/its-time-for-the-press-to-stop-complainingand-to-start-fighting-back/569224/

• “The best ways for publishers to build credibility through transparency,” Sept. 24, 2014: https://www.americanpressinstitute.org/publications/reports/strategy-studies/transparency-credibility/

• “Journalists can change the way they build stories to create organic news fluency,” May 9, 2018: https://www.americanpressinstitute.org/publications/reports/white-papers/organic-news-fluency/

Resources
• MyVote (go to this link to check your voter registration status, find your current representatives and see candidates and initiatives on the ballot): https://weiapplets.sos.wa.gov/MyVote

Jennifer Karchmer is an independent journalist who covers press freedom, reporter safety and the journalism industry. Read more at www.jenniferkarchmer.com and find her on social media: @journalist_jk.