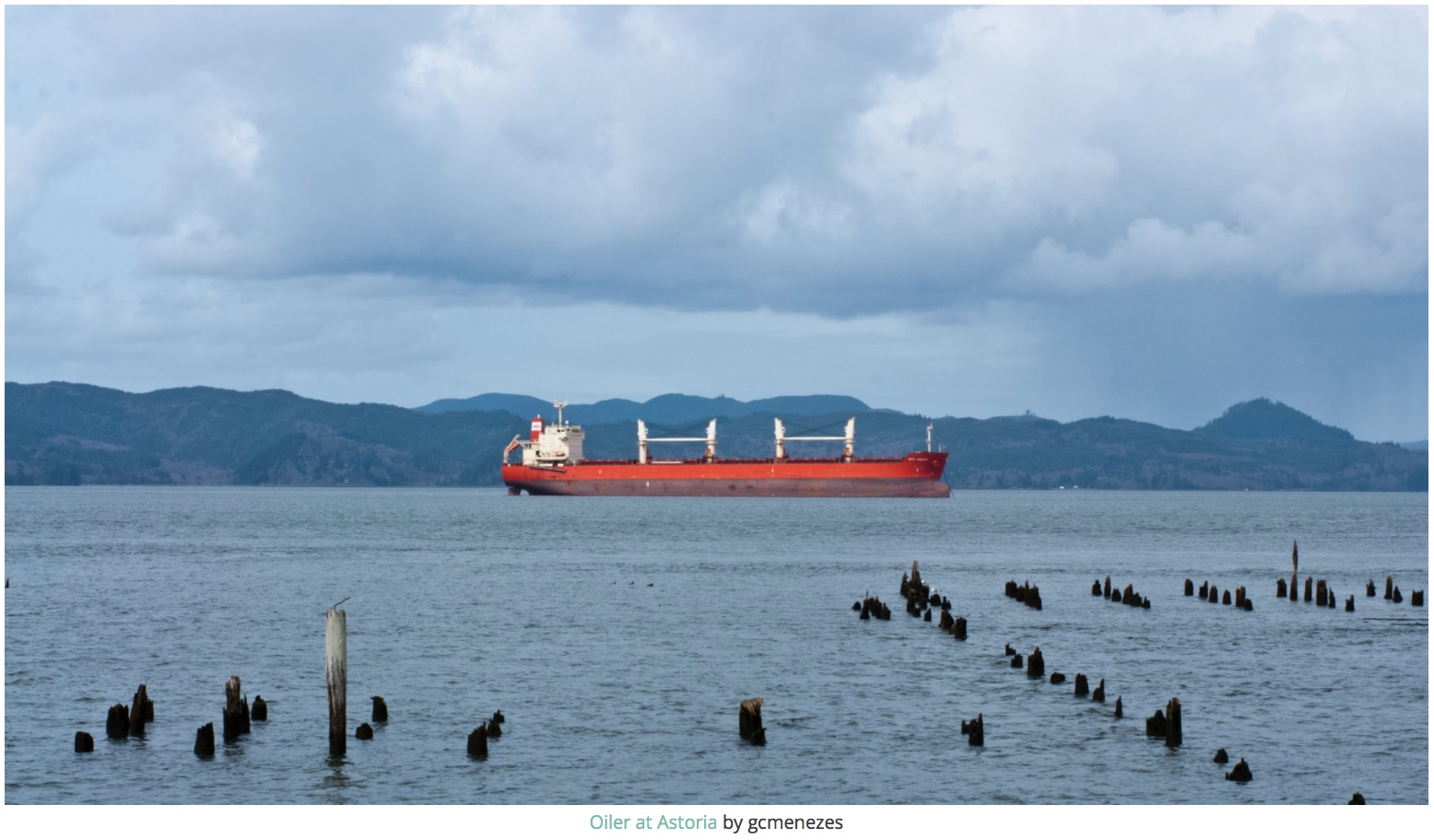 Northwest refineries receive crude oil — the raw material they use to manufacture consumer fuels — via three modes of transportation: pipeline, trains, and marine vessels. After the refining process, the refined products are transported to consumers by pipelines, trains, marine vessels, and trucks. In this article, we discuss the upstream and downstream impacts of maritime shipping of crude and refined products.

The track record for — and the potential risk of — maritime shipping of oil is even worse than the often-dismal records of pipelines and trains. To understand the risk, it helps to start with the numbers. A single oil tanker may carry 400,000 barrels (16.8 million gallons!) of crude or more, while tank barges may have 150,000 barrels in tow. These vessels make nearly 4,000 trips each year on the Salish Sea. And although the vast majority of these transits happen without incident, the historical record shows that Washington has seen multiple spills of thousands of barrels of fuel. The region has been fortunate to avoid a truly major spill for the last two decades.

Disasters and Close Calls
Sightline has documented 50 years of oil spills in Washington’s waters. It’s an alarming history of mishaps, most of which could have been far worse. And the risk goes beyond Puget Sound. Because the oil industry’s reach extends to all of the region’s population centers, there is meaningful risk extended to Grays Harbors and the Columbia River as far inland as Lewiston, Idaho, where the port is visited by petroleum tank barges.

Here we highlight three examples of oil spills that happened as a direct result of moving oil to and from Northwest oil industry facilities:

December 1988, the Nestucca oil spill at Grays Harbor. En route from BP’s Cherry Point refinery to Portland, with a delivery stop at Aberdeen along the way, a tugboat towing the oil tanker barge Nestucca attempted to cross the bar into Grays Harbor when the two vessels collided, opening up a gash in the tanker that ultimately spilled some 231,000 gallons of heavy fuel oil. The winter current, winds, and storms dispersed the oil over 800 square miles. It washed ashore as far north as the Scott Islands north of Vancouver Island and as far south as Newport, Oregon. It fouled the lands of the Nuu-Chah-Nulth nations of Canada and the Quinault Nation of Washington. Canadian officials closed fisheries and commercial harvesting locations for up to six months. The oil affected highly sensitive ecological areas, including Olympic National Park, five national wildlife refuges in Washington, and Pacific Rim National Park in British Columbia. Many rocky or difficult-to-reach shores were “left to cleanse themselves,” according to the Washington State Department of Ecology.

The near misses are almost as harrowing. Thankfully, the Legislature established an emergency rescue tug boat program stationed at Neah Bay in 1999, which has helped prevent catastrophic spills.

Ecologic and Economic Costs
Oil spills are never easy to clean up, but some of the oil transported to Washington’s refineries is especially dangerous, such as the tar sands (sometimes known as “dilbit,” or diluted bitumen) that comes from Alberta. Research shows that dilbit is particularly hard to recover in the event of a spill, an appalling prospect given how little oil is recovered even from spills of conventional crude. In fact, according to Transport Canada, only 10 to 15 percent of a marine oil spill is likely to ever be recovered from open water.

According to an authoritative 2015 report from the U.S. National Academies of Sciences and Engineering, a significant fraction of a tar sands spill would likely sink to the sea floor and remain unrecoverable for decades, if not centuries, harming Dungeness crab, rockfish, sand lance, and other bottom-dwellers. It would also seriously threaten migrating salmon and the endangered southern resident orcas. Orcas have skin that is surprisingly resistant to oiled waters, but scientists have found that consuming prey that has absorbed oil from a spill or breathing in toxic oily vapors near the water’s surface while breaching can, depending on the level of petroleum exposure, cause lung congestion, pneumonia, liver disorders, and neurological damage. A major Salish Sea oil spill could be devastating to orcas and could trigger an ecological catastrophe.

One estimate sometimes used by the Washington Department of Ecology pegs of the cost of a Salish Sea spill at $10.8 billion. (As far as we can tell, no one knows exactly where that figure comes from.) The Ecology estimate is probably 16 years old at least, which is a problem because the new California report suggests that per barrel costs have increased by a factor of four and it is accepted that response costs have been rising since the 1970s, well outpacing inflation. Whether that means a Salish Sea spill might now cost a mind-bending $40 billion-plus is unclear, but it does suggest the need for updated estimates.

Yet, troublingly, even these daunting estimates may be too cautious. The Earth Economics study does not account for impacts beyond the San Juan Islands, nor do they tally the costs to marine transportation, science and education, endangered species, human health, or tribal treaty rights. Just so, the California modeling exercise did not account for wider economic costs beyond the cleanup efforts and liabilities, such as losses to recreation or ecological value, or to tourism, or for the many marine-dependent jobs that are impacted indirectly.

Transporting crude oil and refined petroleum products presents an ever-present risk. Despite ever more stringent regulations, spills continue to happen, causing harm to our environment and our health. It is simply impossible to eliminate the potential risk as long as oil is being transported. The best way to reduce the number and severity of oil spills is to reduce the amount of oil being transported, and ultimately to retire our oil refineries and transition away from our carbon economy.

This article benefited from past research by Ahren Stroming, Tarika Powell, Michael Riordan, and Paelina DeStephano.

This article was first published on Sightline: https://www.sightline.org/2021/11/03/the-danger-of-the-marine-vessels-that-serve-refineries/.

Zane Gustafson, senior research associate, researches and writes for Sightline’s Thin Green Line and Democracy programs.He was born and raised in Pierce County, Washington, and is a graduate of the University of Washington Evans School of Public Policy and Governance. Email: zane@sightline.org.