Could Anchovies and Other Fish Take Pressure Off Salmon and Steelhead? 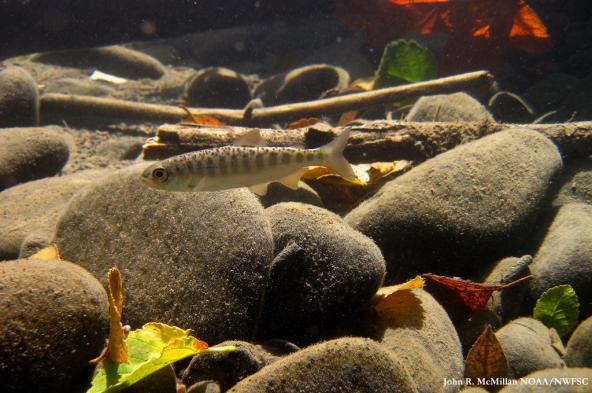 Part 3
Editor’s Note: This series was originally published in the Encyclopedia of Puget Sound.

An intensive research program in the United States and Canada is studying why so few salmon in the Salish Sea are returning home to spawn. Studies by more than 200 scientists on both sides of the border have revealed a tangled food web involving a multitude of predators and prey surrounding their primary species of study: Chinook and coho salmon and steelhead trout. To survive, these salmonids must not only become capable predators, but they must also remain vigilant to avoid larger predators trying to eat them.

Eat or be eaten? For young salmon and steelhead, threats from predators can change as quickly as the food supply, constantly shifting the odds of survival.

In 2014 and 2015, as many as 90 percent of the juvenile steelhead coming out of streams in South Puget Sound were dying before they reached the Pacific Ocean, according to studies led by longtime fisheries biologist Barry Berejikian, a project manager at NOAA’s Northwest Fisheries Science Center.

The careful studies, which involved tracking individual steelhead, identified an apparent connection between the high rate of steelhead deaths and likely predation by harbor seals, whose Puget Sound population had grown from about 3,000 to 14,000 over the past 40 years.

If harbor seals were to blame, people wanted to know if all the seals were eating steelhead, or if just a few of them were the culprits, Berejikian said. With the highly prized steelhead listed as a threatened species, people were asking what steps might be taken to reduce the mortality caused by seals.

“Then everything changed in 2016,” Berejikian said. “Survival rates went through the roof. Instead of 10 percent of the fish surviving, we had close to 40 percent.”

Searching for Answers
In the field of ecology, the quest for a simple answer often becomes a tortuous maze of new questions. Since the number of seals had not declined in two years, there must be another reason why these hungry marine mammals had eaten a lot fewer steelhead than during the years before.

Observers quickly seized on two potential contributors to the increased survival of steelhead, said Berejikian, who is now studying both factors. One involves an increased presence of transient killer whales, which eat harbor seals and may have altered the seals’ feeding behavior.

The other unusual observation was a heavy influx of anchovies — small fish associated more often with the California coast. These little fish could have been pushed north into Puget Sound by warming water in the Pacific Ocean. Perhaps, scientists wondered, the seals had shifted their attention toward eating the abundant anchovies and away from the steelhead.

As in 2016, steelhead survival remained up in 2017, when anchovies were so numerous that South Sound anglers came back to shore with stories to tell. Jay Manning, chairman of the Puget Sound Partnership’s Leadership Council, was fishing with friends near the Nisqually River estuary last August, when he watched a food-web drama unfold as the morning fog burned off.

“There was this solid mass of anchovies,” Manning recalled. “They were everywhere. You could see them in the water, jumping all over the place. I had never seen bait fish like this, not even in the ocean. There were (adult) salmon feeding on the anchovies, and there were seals and harbor porpoise feeding on the salmon.

“It was a vision of what it will be like when we restore Puget Sound to health,” Manning said, adding that more people need to understand the food web from top to bottom. “People were catching salmon, and it didn’t feel like the seals would get the last one.”

Although the migration of juvenile steelhead was over by the time Manning made his observations last August, the large number of anchovies earlier in the year could have provided the seals an alternate food supply, thus saving a good number of steelhead, Berejikian said.

Tracking the Fish
The steelhead studies involve implanting a tiny sonic transmitter, or acoustic tag, into steelhead smolts. [See a related story in Salish Sea Currents: “Advances in technology help researchers evaluate threatened Puget Sound steelhead”]. Each tag can identify a specific fish. By placing acoustic receivers along the shoreline, researchers can track the movement of the fish as they go past each receiver on their way to the ocean.

When a tagged steelhead gets eaten by a seal, the receivers typically show a change in the migration pattern. The seal, now carrying the transmitter in its belly, may reverse course and swim back into an estuary — something a steelhead would not do. When a transmitter remains stationary, it is likely to have passed through a seal or other predator and landed on the bottom.

To be sure, seals remain a prime suspect in the decline and ongoing suppression of Puget Sound steelhead, coho and Chinook populations, according to scientists. After all, the seal population has exploded since marine mammals were placed under federal protection in 1972. Puget Sound now has one of the highest densities of seals in the world.

Meanwhile, little or no population increase has been seen among other likely steelhead predators — namely double-crested cormorants, Brandt’s cormorants, Caspian terns and possibly harbor porpoises. As new information comes together, a growing understanding of the multitude of predator-prey interactions has been changing the dimensions of the puzzle. That’s why it is more important than ever to consider all the things that seals are eating. 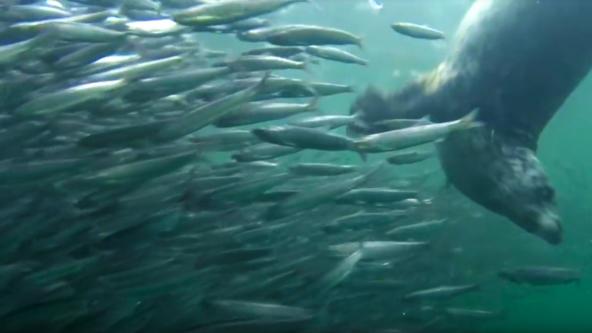 Berejikian wonders whether steelhead were largely given a free pass through Puget Sound during the 1980s, when the seals had many more fish to choose from and steelhead populations were doing okay.

“I think we’re getting to the point where I can confidently say that we need some restoration of our forage fish populations to help steelhead and coho,” he said. “It is probably not the case that we have too many harbor seals; it is probably that they are scraping for everything they can find to eat.”

Chinook Under Threat
Perhaps the fish with the highest profile in the predator-prey equation is the Chinook salmon, the primary source of food for the region’s endangered southern resident killer whales. As Chinook populations stagnate or decline, scientists are looking closely at the impact of harbor seal predation. Brandon Chasco, a biologist at Oregon State University, calculated that harbor seals in Puget Sound were eating 7.8 million Chinook smolts in 2015 — seven times more than in 1970. In a worst-case scenario, Chasco estimated that seals could be eating up to 22 percent of the total number of out-migrating Chinook smolts each year.

The accuracy of that estimate depends on key assumptions in Chasco’s “bioenergetics model” — a technique based on the energy needs of seals and how much energy is supplied by Chinook. Key factors include the size of the Chinook and their percentage in a harbor seal’s diet — factors that can vary somewhat over time and location in the Salish Sea.

Most fish in the Puget Sound ecosystem can become either prey or predator at various times. That may be especially true for herring, considered a key forage fish in Puget Sound. For example, herring might compete for food with Chinook, limiting the growth of Chinook. But herring might also provide a “buffer” for steelhead, meaning that predators would prefer to go after herring, resulting in less steelhead predation. And, as Chinook grow in Puget Sound, smaller herring become a primary prey species for them.

The Cherry Point herring stock near Bellingham — once the dominant herring population in Puget Sound — has declined by more than 90 percent, estimates say, but other herring stocks are generally holding their own, according to Dayv Lowry, a research scientist with Washington Department of Fish and Wildlife. In fact, the Quilcene stock in Hood Canal and the Semiahmoo stock in North Puget Sound have been expanding the past few years and have the potential of changing the predator-prey dynamics.

If current methods of releasing fish from hatcheries causes higher predation on wild salmon or steelhead, then hatchery managers could try new methods of timing the release of their fish.

Studies by Dave Beauchamp of the U.S. Geological Survey have concluded that resident Chinook salmon — those that stay in Puget Sound their entire lives — can consume at least 10 percent of the Chinook reared in hatcheries, and the number may go as high as 50 percent. Other research suggests that resident Chinook, also known as blackmouth, make up nearly a third of the total Puget Sound Chinook.

Whether a Chinook becomes a resident may depend on ecological conditions, including cooler temperatures. Larger juveniles, such as those that stay in their streams for a year, have a greater tendency to become resident. In general, South Puget Sound seems to produce more resident Chinook than areas to the north.

To support the blackmouth fishery, some hatcheries delay the release of their Chinook, which tends to produce more resident fish. In recent years, the state’s hatchery program has cut back significantly on its delayed-release program, probably reducing the predation on juvenile salmon, experts say.

Other Risk Factors in Play
The temperature of the streams and of Puget Sound itself can affect the growth of both prey and predators and possibly force changes in who eats whom. As seen with anchovies and other species, higher temperatures can shift certain kinds of fish into cooler areas to the north. While cyclic ocean conditions may result in temporary shifts in predators and prey, climate change may bring about permanent disruptions in longstanding predator-prey relationships.

As higher seawater temperatures of the past few years return to more normal conditions, anchovy populations could decline from their recent high numbers and again increase seal consumption of steelhead. Actual estimates of anchovies remain elusive, because nobody has been directly counting them or any other forage fish in recent years — except in 2016, when the Legislature funded a special bait fish study.

The acoustic-tagging work by Berejikian and his associate Megan Moore of Northwest Fisheries Science Center has revealed much about the movements of steelhead and the harbor seals that may chase them. For example, steelhead that reach the Hood Canal floating bridge stay within three feet of the surface and generally swim back and forth, as if searching for a way past the floating pontoons that support the bridge.

As the fish pile up at the bridge, they are more at risk of getting eaten by a larger fish, a bird or a seal, Moore said. Evidence that the bridge is some sort of barrier was borne out by the large number of acoustic tags that became stationary near the bridge, meaning they were eaten and later deposited with feces.

The Hood Canal bridge is now the focus of additional studies to figure out how to help the young steelhead make it past the bridge without getting eaten. Coordinated by Long Live the Kings, the project may offer temporary solutions, such as some sort of seal-exclusion system around the bridge pontoons. Permanent solutions may need to wait until the bridge is replaced using a future pontoon design that allows for smoother fish passage.

In the end, scientists say, knowing where and why salmon and steelhead die in Puget Sound may be a key to solving the ongoing marine survival problem.

View this article at the Encyclopedia of Puget Sound: https://www.eopugetsound.org/magazine/ssec2018/marine-survival.