On May 9, 2016, the U.S. Army Corps of Engineers responded to the Lummi request of January 2015 that it deny federal permits for the proposed Gateway Pacific Terminal (GPT) in accordance with the Treaty of Point Elliot of 1855. Some terminal opponents and local media likened the Corps’ action to chopping the head off a zombie and killing once and for all the proposal that did not want to die.
Yet …

GPT’s proponent, SSA Marine, saw a glimmer of opportunity, or so they told their boosters, in the Corps’ decision. A May 17 GPT e-news alert quoted SSA’s Bob Watters as saying, “We have a number of paths available to us and we are working through those strategic options at this time.” Some of those options, the Alert continued, include “legal challenges and modifying the project in some way.” (1)

The Corps’ response to the Lummi included three documents which described two scenarios for reconsideration. As discussed below, “legal challenges” is not one of them. Additionally, while pier redesign is mentioned as a possible avenue for resubmission, the Corps’ analysis, read as a whole, does not support the notion that a different pier could ever pass muster under existing jurisprudence.

Rather, the only real recourse for the proponent would appear to be political. And with that political possibility, one can imagine a new type of monster: a Frankenstein zombie, (2) defined as a zombie carrying its head under its arm awaiting reattachment by a gaggle of swamp things lurking in the U.S. Congress. (3)

Background
The Corps’ response to GPT proponents cited legal precedent discussed in our February 2015 issue. (4) That precedent establishes a “de minimis” standard when federal agencies consider whether a government action – such as granting a permit for construction of a facility — would have a “legally significant” impact on tribal treaty rights to fish in their “usual and accustomed” (U&A) fishing grounds.

GPT would have handled 54 million metric tons per annum (mmta) of commodities, primarily Powder River Basin coal from Montana and Wyoming, arriving by rail and leaving on Panamax and cape class bulkers. Up to 487 vessels per year would traverse the Puget Sound, carrying cargo almost exclusively to Asia.
Lummi U&A fishing grounds extend from Point Roberts to Haro Strait and include reef net grounds off Shaw, Orcas and Waldron Islands, and off Cherry Point on the mainland. (5)

Right to Appeal
In his letter, Col. Buck states without explanation, “[T]his decision is not appealable.” Walker, in her memorandum, states: “A treaty is a binding agreement or contract between independent nations or sovereigns.” Presumably, because SSA/PIH/GPT — while the subject of the Corp’s determination — was not a party to the treaty, the federal “action” of denying a permit is a subject which could only be appealed by a signatory to the treaty.
Only Congress could amend the terms of a treaty and allow an impact which otherwise violates its terms, according to the Walker memorandum. (9) In short, the project applicant’s only option is a political one, according to the corps’ analysis, discussed below.

Denial Without Prejudice
Col. Buck’s letter stated the Corps’ denial was “without prejudice,” and the Corps would reopen consideration if PIH “resolved” the Lummi’s objections. Also, PIH could apply for a new permit based on “a substantively different proposal,” according to Buck’s Memorandum. He does not describe what “a substantively different proposal” might look like, but the Walker Memorandum analysis, described below, appears to forestall the idea that any pier could avoid more than de minimis impacts as U&A is currently defined by the treaty.

The Pier and Docked Vessels
In his memorandum, Buck stated that the proposal would unacceptably impact fishing rights “because the proposed wharf and trestle impair, limit, or eliminate access to the Lummi Nation’s adjudicated usual and accustomed fishing grounds.” (10)
The Walker memorandum limited its analysis of impacts to “the proposal’s footprint” and used the word “footprint” at least six times. She based her conclusion on the pier footprint with docked vessels, although she began the analysis by considering a larger area. She located and defined the area she initially considered as the following:

At full build out, the over-water impacts of the project will include a trestle, wharf, three ship berths, and new vessel approach lane covering 122 acres and handling 487 total annual vessel calls, one vessel arrival or departure every 18 hours. This does not include the incidental vessel traffic needed to operate a deep water export facility of this magnitude. (11)

Walker discussed the impacts of vessel movements on fishing and crabbing, and mitigations proposed by PIH such as vessel traffic management and communications. She also discussed management of berthing ships and fishing vessels at the dock and time and manner limitations on fishing in the vicinity of the dock.

Walker concluded that PIH could mitigate the impacts of the moving vessels in the 122-acre area, but did not pose the question of whether any remaining impact would be more than de minimis, because, she said, “only Congress could regulate the time and manner of tribal fishing not related solely to fish conservancy.” (12)
The pier’s impacts, however, cannot be mitigated because it and its berthed vessels would sit where fishermen “require unobstructed water for fishing nets to successfully drift,” according to Walker.(13) As long as that pier is sitting in U&A, it will have more than a de minimis impact on Lummi fishing rights, and “[o]nly an act of Congress can eliminate a part of the Lummi’s U&A fishing grounds,” she wrote. (14)

Numerous Options?
GPT’s “paths” all appear to be political and narrowly focused: the proponent would have to attack the Treaty of Point Elliot in order to build not only the proposed terminal, but likely any terminal. Walker’s analysis describes what would have to occur for the Corps to reconsider their decision: Congress would have to both 1) allow time and manner restrictions on Lummi fishing for a reason other than conservancy — specifically, to minimize impacts with berthing commercial vessels, and 2) exempt the pier’s footprint from U&A fishing grounds.

The Corps’ construct ignored the vast majority of U&A fishing grounds Walker described in her memorandum that stretches from Haro Strait to Point Roberts. It does not consider ANY impacts freighters bound for GPT’s proposed pier would have on fishing boats and operations beyond the wharf and trestle. And it never addressed increased spill risk.

The Walker memorandum addressed future fishing but only at Cherry Point, and only in response to an issue raised by the Lummi Nation about the need to protect their right to fish area herring if the biomass is restored to fishable levels. PIH argued future fishing of a potentially restored resource is not a reserved Treaty right, but Walker disagreed. Boldt I, she wrote, guarantees tribes the right to “fish in the future,” and any impacts analysis “must include potential future fishing and be completed at the time a proposal is being reviewed, prior to construction.” (15)

Walker ignored the entire area of the Puget Sound beyond Cherry Point and did not analyze the impacts of the 487 ships passing through fishing grounds from Haro Strait to Point Roberts. Nowhere did she analyze the impact of a spill related to increased vessel traffic. She references a Vessel Traffic Risk Assessment (VTRA) conducted by Glosten and Associates for GPT, yet ignores its analysis and measurement of risk associated with cumulative proposed vessel traffic, nor the fact that another VTRA conducted by George Washington University and informed by the Puget Sound Harbor Safety Committee measured almost identical spill risk. (16)

Analysis
It seems arbitrary and capricious to consider the movement of vessels and their impacts on fishing only at the immediate vicinity of the footprint of a proposal in the context of an analysis of impacts on rights that expand beyond that geographic confine. The subject of the Lummi request was its fishing grounds and rights defined and protected by treaty. The proposed “government activity” referred to a terminal that would bring up to 487 vessels through the Puget Sound, potentially transecting many more points in Treaty-protected U&A fishing grounds than the 122 acres at Cherry Point.

The Corps has done its treaty analysis as it does NEPA analyses for shipping terminal proposals in the region: limited its jurisdiction as narrowly defined by the agency. When it acts as a permitting authority, however, it acts on behalf of the U.S. government. While the Corps may wish to limit its own jurisdictional reach, it is highly doubtful that the 9th U.S. Circuit Court of Appeals would agree that the United States may so narrowly define the Lummi’s treaty rights.

Federal courts analyze Treaty of Point Elliot questions by beginning with a conclusion stated by the U.S. Supreme Court more than a quarter century ago: “[I]t is … inconceivable that either party deliberately agreed to authorize future settlers to crowd the Indians out of any meaningful use of their accustomed places to fish.” (17) Because sewing the head back on the GPT zombie would require Congress to take a sledgehammer to the Treaty of Point Elliot — to mix metaphors – SSA/PIH/GPT has no reasonable paths and it is time they said so.

Letter and memorandum from U.S. Army Corps of Engineers: 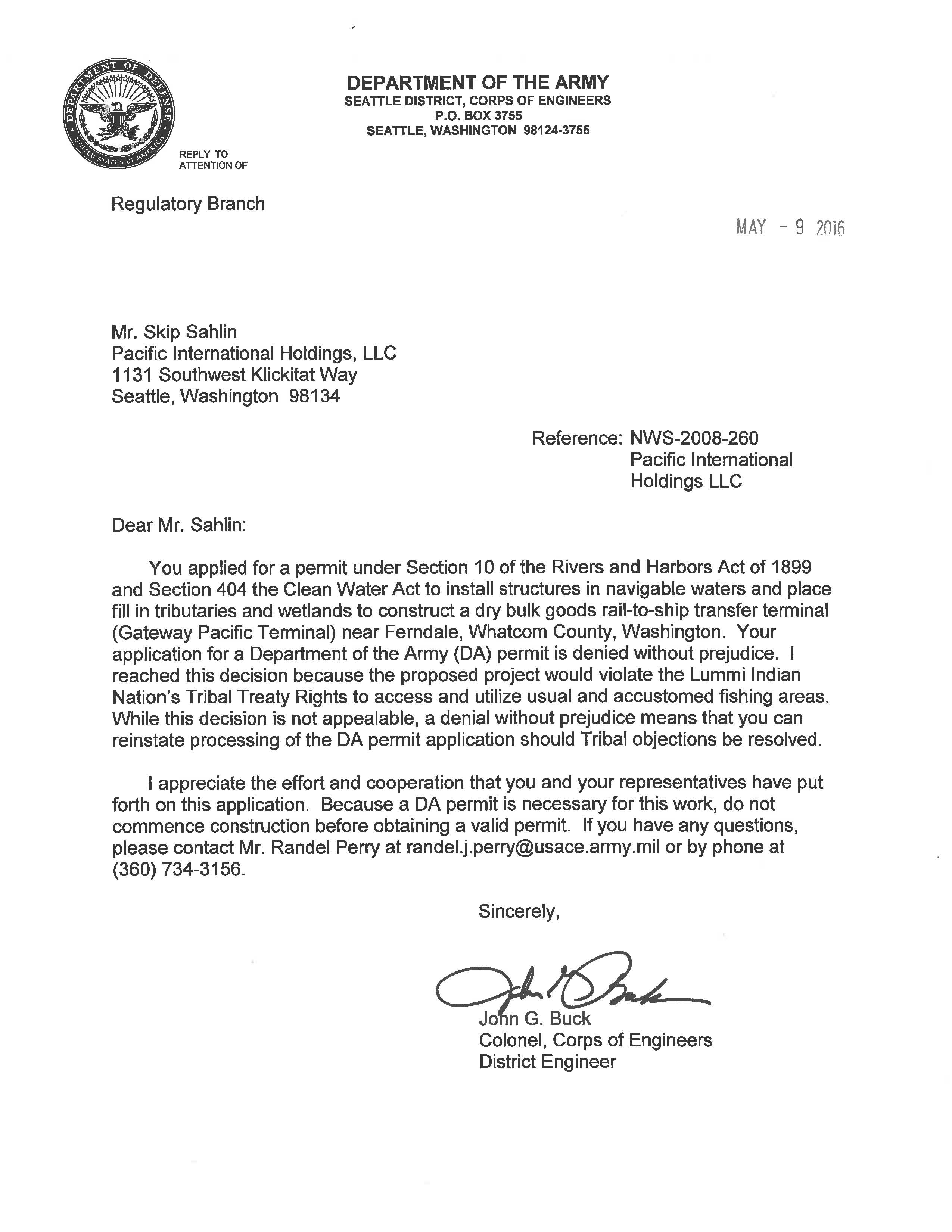 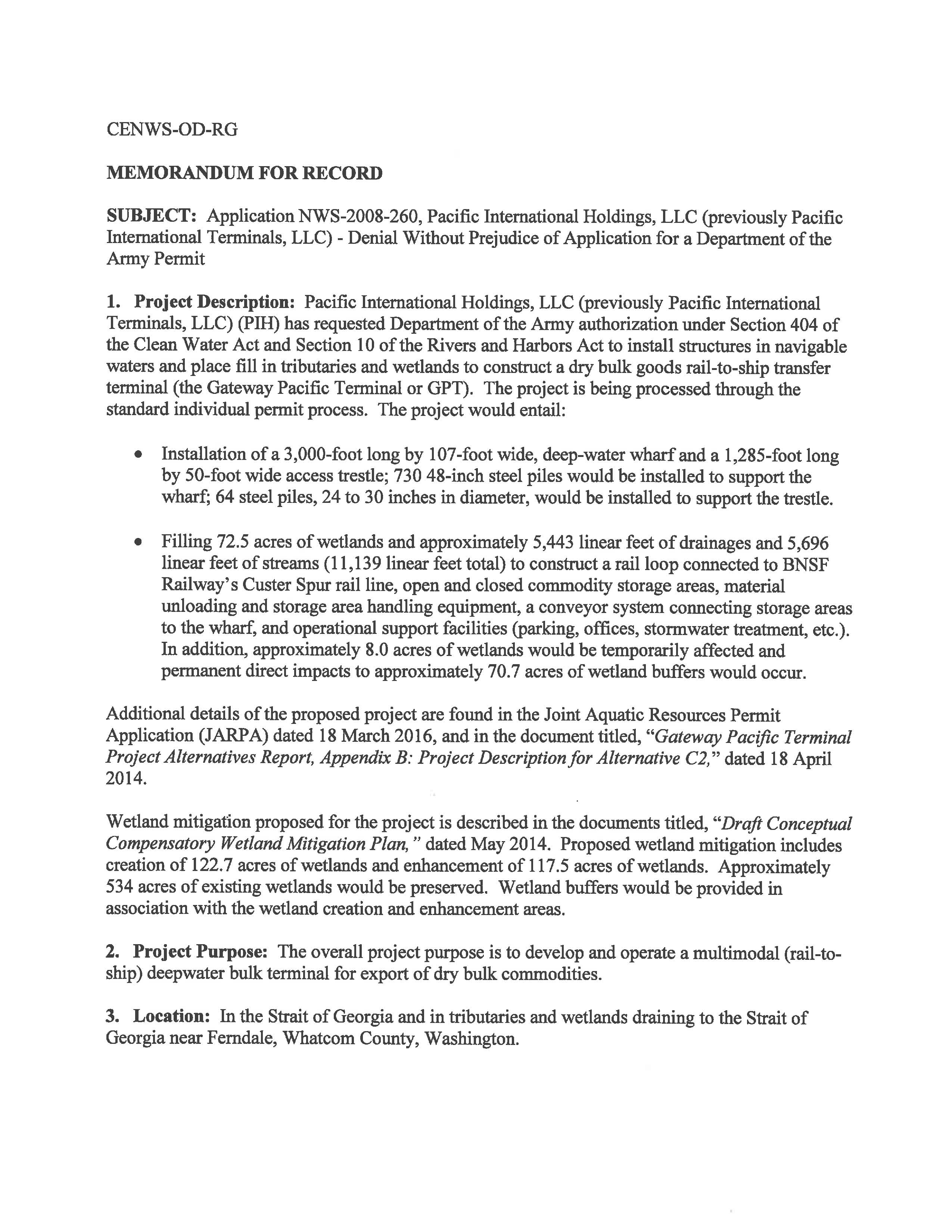 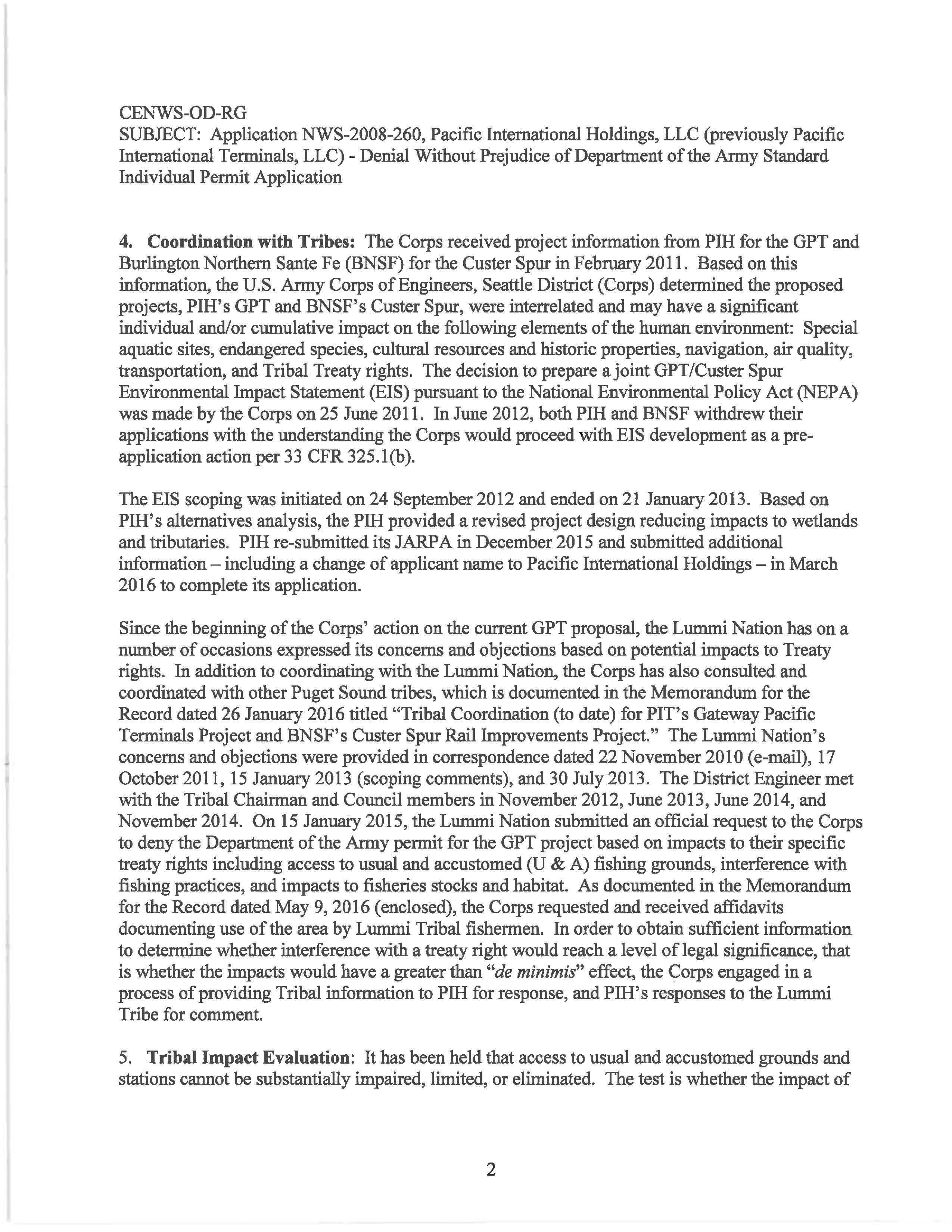 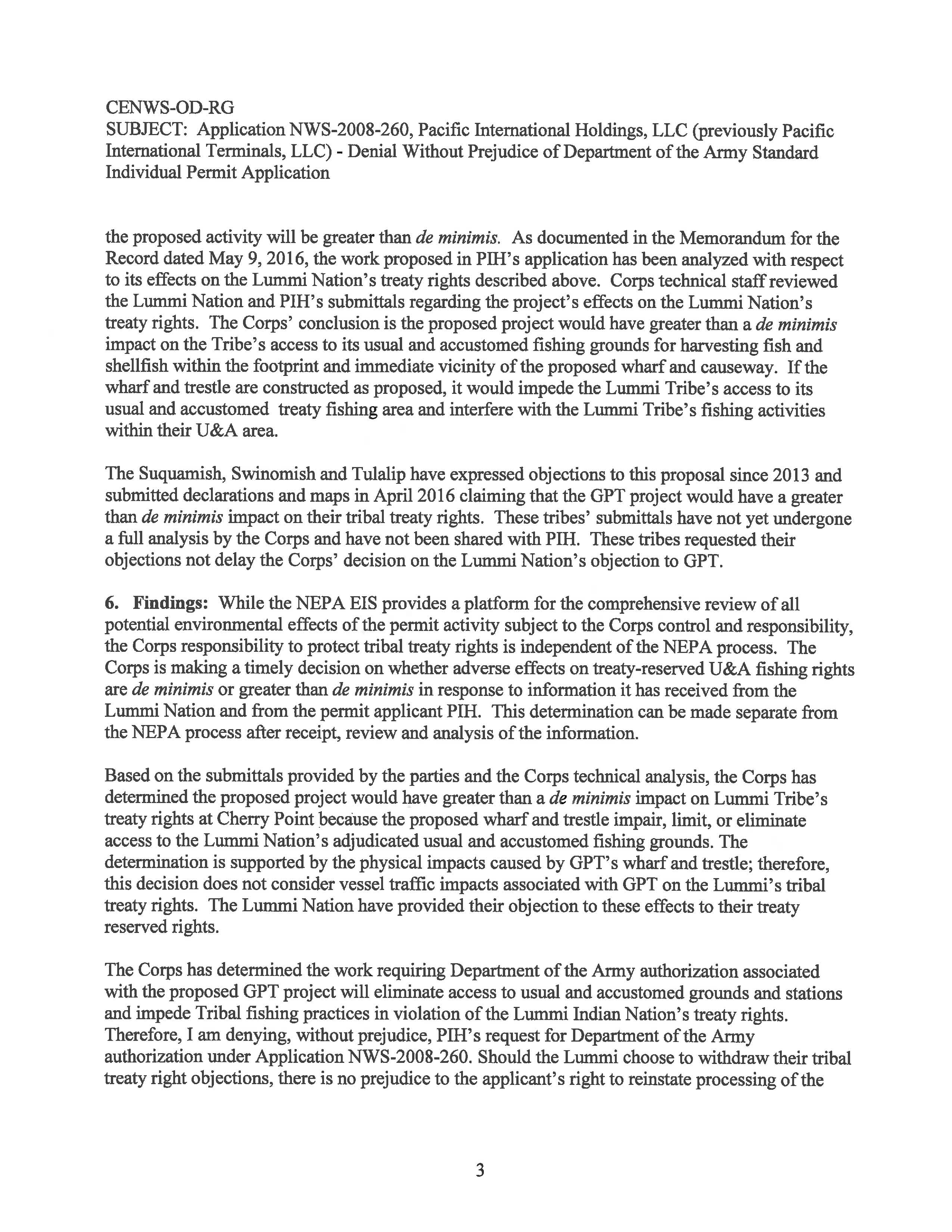 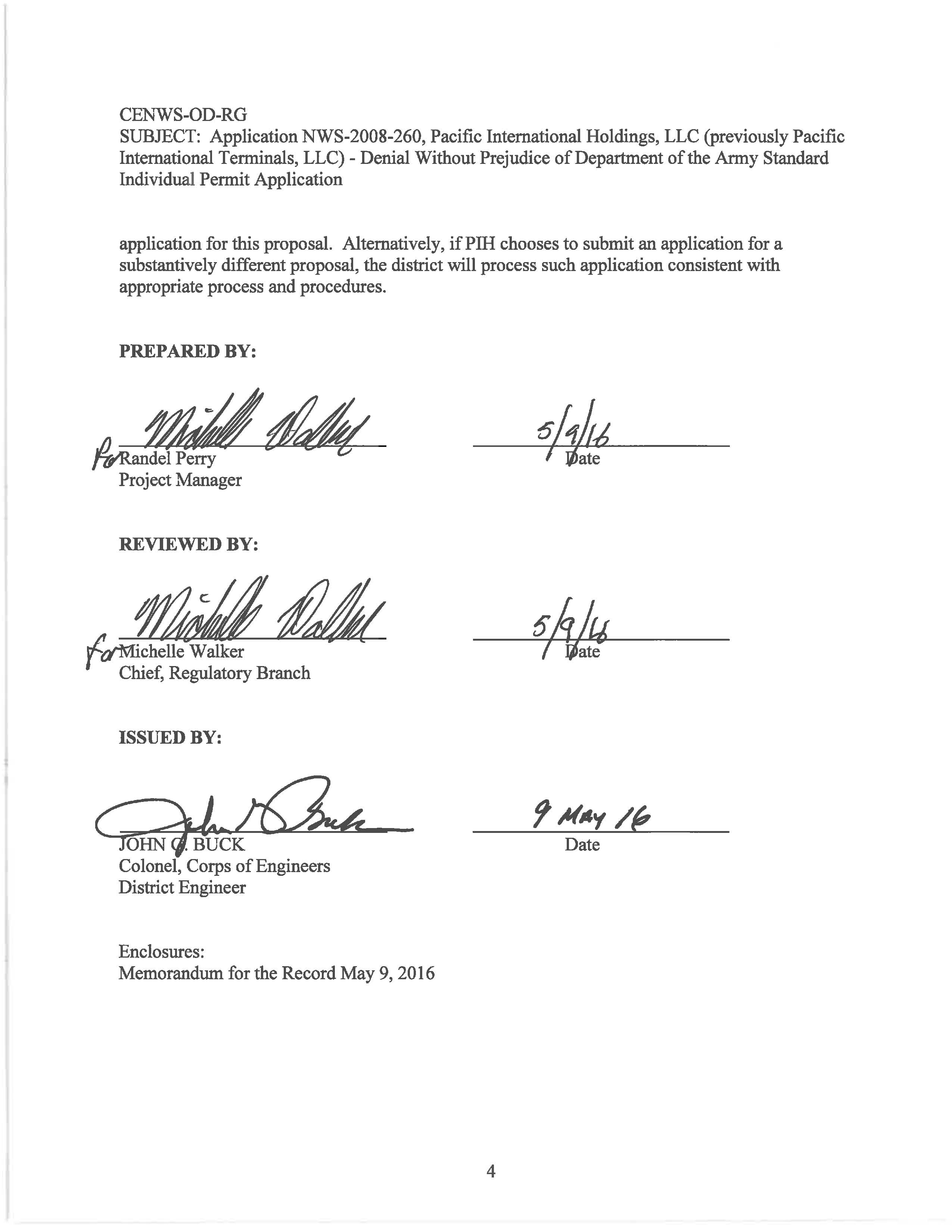 (1)“The project” as described by the Corps is limited almost exclusively to the wharf and trestle, as discussed in this article. That wharf and trestle are almost identical to that permitted by Whatcom County in 1997 for the 8.2 mmta terminal to ship wood chips, potash and others commodities which did not include coal, and which would have received 140 (versus 487) annual vessel calls. The March 14, 1997, Hearing Officer’s findings in support of county permits contains a detailed description of the earlier pier and activity and is available online at http://wa-whatcomcounty.civicplus.com/DocumentCenter/Home/View/2838.

(2) According to zombie “experts,” Frankenstein is not a zombie, so GPT would be some new species of horror creature. See, e.g., “Frankenstein is Not a Zombie!” Zombie Research Society, Feb. 19, 2012. http://zombieresearchsociety.com/archives/10099.

(9) “Only an act of Congress can eliminate a part of the Lummi’s U&A fishing grounds.” Walker Memorandum, p.28.

(13) “The pier itself eliminates a geographic area where fishing and crabbing occurs …. The mitigation efforts do not address the physical impacts of wharf and trestle. Stated differently, even with the PIH’s proposed mitigation, there would still be impediments to fishing because the physical presence of the wharf and trestle interferes with the Lummi’s U&A fishing.” Ibid., p.30.