Climate change is already impacting our health, environment and economy in Whatcom County, and its effects will only accelerate in the future. Meanwhile, cities and counties across the country are coming to grips with what they must do to mitigate and adapt to the changes that are coming — even if we were to end the burning of fossil fuels immediately.

Ellyn Murphy was appointed to this committee in 2018; she found that there was a dearth of readily available information to inform any actions. Murphy is a recent resident of Bellingham. With a master’s degree in forestry and a Ph.D. in hydrology, she spent the last 25 years working in Richland, Wash., at Pacific Northwest National Laboratory, a U.S. Department of Energy national laboratory. As a member of the League of Women Voters (LWV), she led a survey of sustainable practices in the Tri-Cities, which was later used by the local Tri-Cities Washington Economic Development Council.

Murphy thought a similar survey of the various county departments, industries and stakeholders in our county was needed to find out how climate action had evolved since the last county climate action plan in 2007. What climate impacts have stakeholders already seen? What is on the horizon? What can we do to mitigate and adapt as global warming affects the land and the sea?

After discussions with other CIAC members, she recruited volunteers from CIAC, League of Women Voters, and the Citizens’ Climate Lobby to survey the various entities in order to fill in the informational gaps and find out how climate action had evolved in the county.

The CIAC committee approved the project in February 2019, and they, along with Chris Elder (county liaison to CIAC), identified eight focus areas and suggested various organizations to interview. No funding was identified for this project, and the newly formed task force donated an untold number of hours over the next several months to research their focus areas, conduct multiple interviews, and then write up their research. Each of us found the research rewarding as each new piece of information led to another piece of the overall picture.

CIAC had developed a set of questions to begin the conversations and the task force also encouraged input from those they interviewed.

The volunteers interviewed more than 100 community leaders and climate experts and augmented the report with reliance on scientific publications, Washington state reports, and best practices in other communities.

Focus Areas and Task Force
The final report labeled, “The Community Research Project,” contains an executive summary and eight different reports from the research of each of the areas. These reports, which emphasize the key issues that were raised and how climate change is impacting these areas, also provides some suggested strategies and actions that the county can evaluate for their revised climate action plan.

Most of the interviewees were happy to talk about their areas. Unfortunately, it would seem that the recession in 2008 ended most of the more ambitious plans to combat the impacts as the climate and seas warmed. Stuck in the groove of low budgets and without any push from on top, the departments stagnated on this issue — and, only now, as climate change has become an existential issue, are people in the county’s infrastructure beginning to look to a path forward toward adaptation, resilience or mitigation.

An understanding of these terms is necessary. Mitigation is reducing or stabilizing the levels of greenhouse gas (GHG) in the atmosphere — this includes reducing the use of fossil fuels and/or adding more carbon sinks. Adaptation is adapting to the challenges of climate change while reducing our vulnerability to its harmful effects. This would include proactive plans for climate related disasters based on scientific data. (A local example would be the new berm being constructed in Birch Bay to protect homes from storms as the sea level rises.)

Resiliency is the ability of a socio-ecological system to absorb, recover from and more successfully adapt to adverse events. (Growing fewer water-intensive crops or retrofitting our homes to solar.) The efforts toward mitigation are complicated because of the shared interdependence of the focus areas —an example being many would argue the dams need to come down on the Snake River to save the salmon, but then we are giving up a source of clean energy.

Buildings and Transportation
The task force identified the two main areas with the most carbon emissions: buildings and transportation. We cannot possibly meet a goal of being carbon-neutral without tackling these areas aggressively. Luckily, this challenge will be helped by new state policies, as well as actions that are being recommended by the city of Bellingham Climate Action Task Force. It is our hope that our task force recommendations will be a welcome part of the county’s deliberations.

The full Community Research Project can be found on https://www.whatcomcounty.us/2744/Climate-Impact-Advisory-Committee under climate planning documents. Whatcom Watch will be providing information from each of the focus areas in the coming months.

The suggested strategies in the report will not all be easy, and will require a level of commitment from all citizens. Change in behavior and lifestyles, and a reexamination of our values and goals as a community, and as a community of nations, will be needed to save the planet that is our home. The kids get it. Led by the extraordinary Greta Thunberg, they are asking us to make these choices for their future. 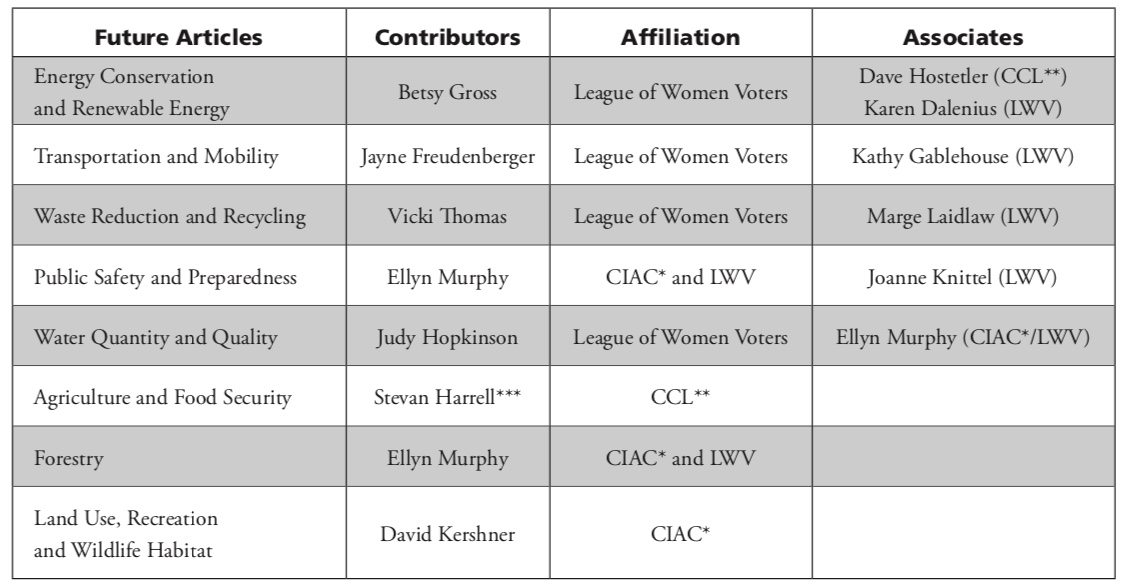 Jayne Freudenberger has been an activist on the climate issues since she coordinated with other environmental groups, the League of Women Voter’s opposition (both on the local and state level), to the Gateway Pacific Terminal. She is cochair of the league’s climate change committee and has trained with Al Gore’s Climate Reality.