Editor’s note: This is the first of two articles exploring Whatcom County’s agricultural past and present and current efforts to diversify and strengthen Whatcom County’s food system, from the farm to the factory to the consumer.

Whether Whatcom County’s small farms can provide the foundation for the reconstruction of our local food system is today’s challenge. Before we dive into how farmers are putting on their business hats in the second article in this series, let’s look at some of the history of Whatcom’s farms. 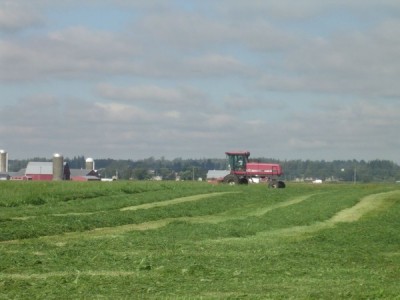 The story of Whatcom County’s farming history, like that of the nation’s, is one of increasing specialization, mechanization, industrialization and consolidation over time. It is, in part, one of prosperity and success. Whatcom County now ranks among the top three percent of farm counties nationwide and the top six percent of dairy-producing counties. Nearly two-thirds of red raspberries in the United States are grown in Whatcom County. (1) Over the past century, agriculture has become a vital part of Whatcom County’s economy, culture and identity

Nevertheless, the farming story is also one of loss and decline. In the past half-century, farm acreage has dropped, as has the number of farms. Fewer farms translates into fewer farmers and the loss of farming knowledge. Crop diversity and the ability to move that diversified product to market through value-added processing have also suffered over the years.

In many ways, the work of numerous individuals and organizations across Whatcom County is to reconstruct a piece of what was. Today’s story has a “back to the future” flavor, as those working toward a local, sustainable farming economy seek to restore some of the diversification and infrastructure that was lost over the past half-century. The rebuilding of a more localized and diversified farming future in Whatcom County may take on new significance in the age of global warming, with uncertain fuel sources and costs, the unpredictable water supply and growing conditions that are already disrupting agricultural production nationwide.

What’s Past is Prologue
The 1950s marked the height of local farming in terms of acreage devoted to farming and the number of farms. In 1950, there were 4,436 farms in Whatcom County, with an 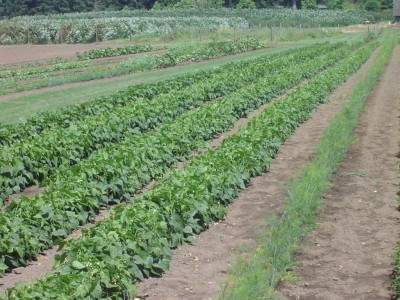 Today, not only are fewer acres farmed, but also farm production is much less diverse than in the past. In the 1920s, for example, more than 14,000 acres were devoted to grain production. By 1963, this had dropped to about 6,000 acres. Small grain production today is minimal. (3) Vegetable crops formerly included sugar beets, green peas, sweet corn, snap beans, cauliflower and cucumbers. Produce was processed locally, including a processing site in Lynden. As late as 1987, more than 4,500 acres were planted to green peas. By 2007, green pea crops had decreased to nearly nothing. As vegetable processing consolidated out of the area to locations with greater volume, the acreage devoted to these crops declined dramatically. (4)

Whatcom County’s poultry industry is another story of decline. In the 1950s, poultry and egg production, together with dairy, comprised 90 percent of the Whatcom agriculture sector. According to the 2011 Whatcom County Community Food Assessment report, “Poultry production was so extensive in the County that ‘Lynden Chicken Noodle Soup’ became a popular canned item, sold nationwide.” Bellingham’s waterfront Granary Building played an integral part in the local poultry industry. The structure, built by the Washington Egg and Poultry Cooperative Association, processed chicken feed and was one of the largest egg distributors on the West Coast. In the 1960s, however, the poultry industry crumbled as national competitors, such as Tyson Foods, took control of the market. (5) 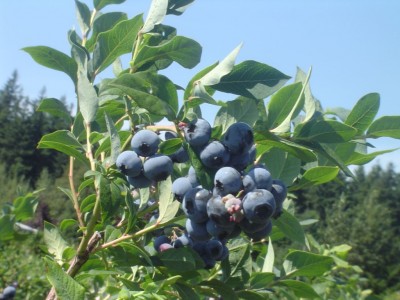 With the decline in these products came the specialization in dairy and berry crops that characterize Whatcom County farming today. In 1987, about 2,000 acres were devoted to raspberries. Twenty years later, raspberries were grown on more than 7,000 acres. In 1959, dairy comprised only about 37 percent of local agricultural production. By 2007, it increased to 57 percent. Berries, nuts, and fruit comprised about 13 percent of the market in 2002. By 2007, these products had increased to 20.4 percent. Together, dairy and berries now represent more than three-quarters of agricultural production, even as the number of dairy farms in the county is a fraction of what it once was. (6)

Farm to Table
Some might ask: What difference does it make if agriculture is specialized and consolidated? The result, some would argue, is a more efficient market that has enabled more Americans to spend less of their household income on food. As a percent of income, American food expenditures have sharply declined since 1960. While Americans spent 17.5 percent of their income on food in 1960, food represented only 9.9 percent of American household budgets by 2013. According to one account, “… Americans spend less on food than people in any other country in the world.” (7) Whatcom County has risen to a position as a leading farm economy in the United States based on a consolidation and specialization model.

From both a cultural and an economic perspective, others seek to diversify the local farm economy and our food system. In reaction to the industrialization of agriculture nationally, more and more consumers, retailers and restauranteurs have embraced local foods, promoting the concept of “farm to table.” There is a strong and growing desire to know where our food comes from, learn about how it was produced, and meet the people who produced it.

However, there is an economic case to be made as well about the importance of diversifying our farm economy. This year’s raspberry crop was 26 percent lower than in 2014, and competition from Chile is always a threat to the local industry. Similarly, Whatcom County has fewer dairy farms than in the past, and profitability in the dairy industry is volatile. (8) So diversifying can clearly help when times get tough in one industry.

Numerous examples come to mind about the dangers of “putting all your eggs in one basket” when it comes to economic development and vitality. The news that Alcoa will soon lay off 465 workers is another cautionary tale about linking our local economy too heavily to products or employers that are subject to the whims of global trade. (9) More local producers of more local products sold to more local consumers certainly helps. Supporting a diversity of farm products and the accompanying infrastructure needed to support farm businesses is arguably as important as preserving farmland in Whatcom County if we are to have a vibrant agricultural sector.

A Tough Row to Hoe
Diversification of the local farm economy is not easy, as many working on this issue are finding. Along with the challenges that all farmers face in Whatcom County, such as the cost of land and water access, local farmers and farming organizations face a kind of “chicken and egg” dilemma of “which comes first?” That is, more farms and a greater supply and diversity of farm product, or increased processing capacity? How can farmers pursue diversified production if there is an inadequate processing and distribution system to get their product to market and to support the value-added production that increases the economic viability of farm businesses? But without the farmers, there is nothing to process or distribute. This is the problem that led to the collapse of local vegetable processing years ago. When processors moved out of the area, farmers stopped growing vegetables. When you’re growing a seasonal product, you only have a seasonal business in the absence of processing capacity.

Then there’s the matter of making a living and building a business. While a variety of programs and organizations exist, such as Sustainable Connections, the Northwest Agriculture Business Center, the Whatcom Community Foundation, the Community Food Co-op, and Whatcom Farm Friends, to name a few, which support, advocate for, train, mentor, fund, develop and market farmers and the development of a more vibrant local food system, it’s still a difficult road for farmers building a business. 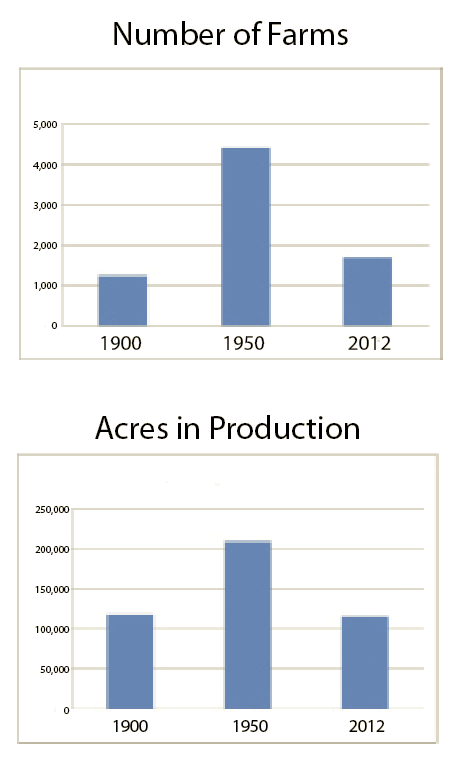 Whatcom’s farm economy continues to be dominated by small farms. The number of farms that are less than 50 acres has continued to grow over the past 25 years, while the number of farms between 50 and 500 acres has decreased. The result is what some might call “hobby farms” in Whatcom County. In some ways, however, that strikes a “back to the future” theme as well.

When Whatcom County had the most farms, more diversified agricultural production, and greater processing capacity back in the 1950s, farmers typically had small farms with an average size under 50 acres. Farmers also tended to be part-time farmers. More than half of the farmers in the 1950s earned the majority of their income from off-farm employment, and, according to the Community Food Assessment report, “… nearly 60 percent of the principal farmers within a farm family worked off the farm as well.” Similarly, in 2007, nearly three-quarters of farmers had off-farm employment, and about half of farmers earned most of their income elsewhere. (10)

The difference between now and then is that there were more than twice as many small farms and nearly twice as much acreage devoted to farming. That additional capacity is what made processing infrastructure viable.

Whether today’s small farms can provide the foundation for the diversification and, in some sense, reconstruction of the local food system is the challenge before us.
As stated in the 2011 Whatcom County Community Food Assessment report, “Food growing and food manufacturing go hand in hand when one considers the structure of an agricultural economy and a food system.” (11) Business plan development, working with community partners to increase processing and distribution capacity, developing value-added products, and looking for business incubator opportunities are all part of the equation.

For the next installment in this Whatcom Watch series, we will look at how local farmers and their community partners are pursuing opportunity in all of these areas. Sara Southerland, Food and Farming Manager at Sustainable Connections, reports that local farmers are approaching these efforts “with their business hats on.” (12)

Jennifer Moon is an independent researcher and writer living in Whatcom County. She holds a Ph.D. in American history from the University of Virginia.