Bringing the Beach Back to Birch Bay 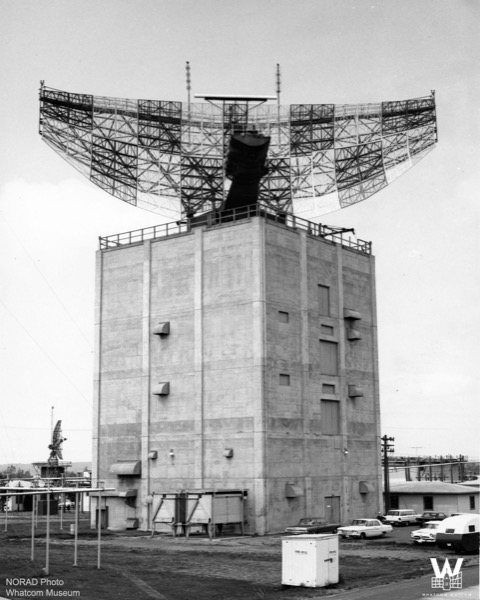 The removal of gravel for construction of this huge building in the 1950s could have helped create shoreline erosion at Birch Bay. See the article, “Blaine Air Force Station” for details about the building.
Photo of the BlainePhotographer is unknown. Courtesy of the Whatcom Museum.

After decades of erosion, the county is restoring the bay’s natural shoreline.

When a storm hit Birch Bay in 2018, it was accompanied by towering 11-feet-tall king tides, much like the storms the town had seen before. The waves managed to breach the dining area of the shorefront Bay Breeze restaurant. Customers were told to evacuate to Birch Bay Drive where they watched the restaurant’s beer kegs float down the road in a sweep of debris.

King tide waves during storms hold a notorious legacy in Birch Bay as being known for causing great amounts of damage to the areas surrounding the waterfront.

In recent years, the Whatcom County Public Works department, alongside involved organizations, has been tasked with mitigating the effects of the coastal storms. In 2012, the Whatcom County Council agreed that a soft-shore berm would be the optimal solution to restore Birch Bay’s natural shoreline and resort community.

The Beginning
In previous decades, Birch Bay was known for its long gravel and sand beach that provided the perfect relaxation spot for beach goers. Visitors came to the Salish Sea to enjoy all sorts of activities, from clam digging to bird-watching. 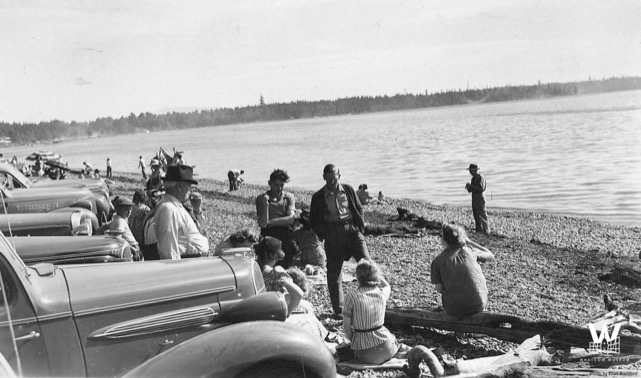 A group of people gather on the beach in Birch Bay in front of a row of parked automobiles. The photo is undated but has been estimated to have been taken in the 1940s.
Photo was taken by Elias Bredford and provided by the courtesy of the Whatcom County Museum.

But the small shore-based community began to notice their beach was shifting; it was shrinking. As the town had grown and developed, the road had been built directly on top of the beach.

“Initially, throughout the 50s, 60s, and 70s, the community in the bay began to notice that they were losing their beach,” said Roland Middleton, special projects manager at Whatcom County Public Works department. 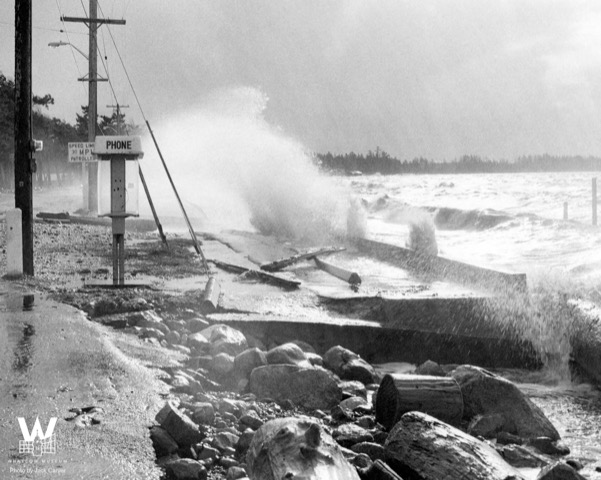 Waves crashed on to Birch Bay Drive during a slight windstorm on December 4, 1967.
Photo taken by Jack Carver and provided by the courtesy of the Whatcom Museum.

The development that had erupted near the shore had taken away the ability for the beach to have its own naturally developed high berm to help protect against storm waves.

In addition to development, in the early 1950s the United States Army Corps of Engineers excavated roughly 300,000 cubic yards of gravel from Birch Bay to construct the Blaine Air Force Station and radar station.

The removal of natural material from the area is understood to have possibly created the sediment deficit in Birch Bay.

To combat this, Birch Bay implemented hard-armor techniques, consisting of bulkheads, riprap, and concrete groins that extended into the bay. Hard-armor can be described as non-flexible methods of protection against surging waves and erosion.

A little bit more than half of that bluff reach contains bulkheads, so sediment isn’t being reached in those areas. That’s definitely a significant sediment reduction,” said Jim Johannesen, who is an engineering geologist and the founder of Coastal Geologic Services Inc.

First Step
One of the largest storms Birch Bay experienced was in 1982. 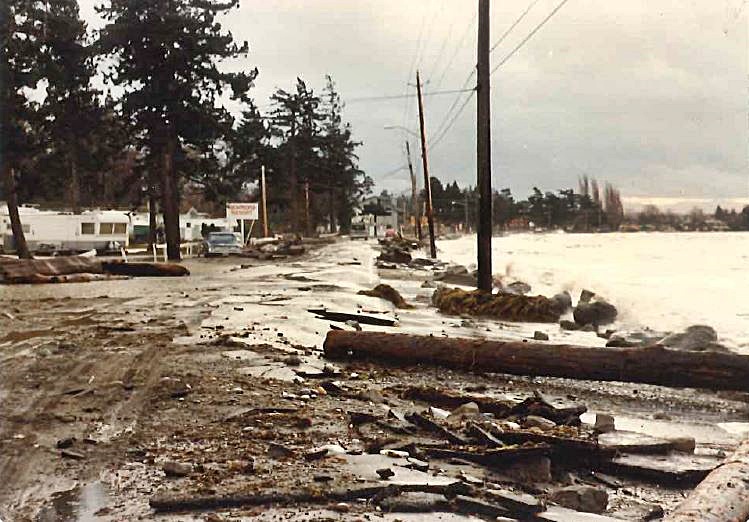 Logs are shown washed up on the shore of Birch Bay after a storm in 1982.
Photo was taken by Edith Loe and provided with the courtesy of Whatcom County public works department.

“Everything was smashed,” said Middleton. “We had to bring in bulldozers to come in and plow out the road just to bring emergency vehicles in.” 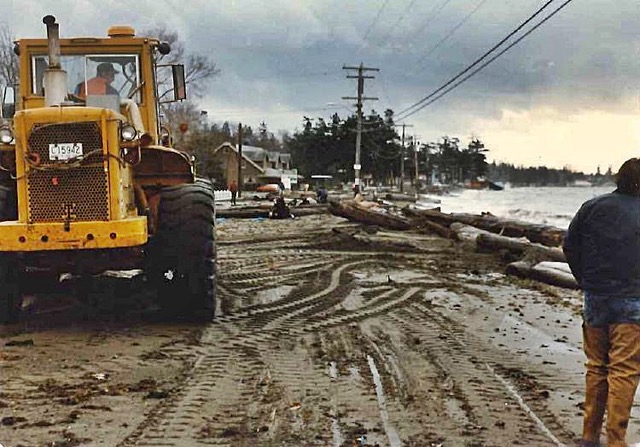 After the storm in 1982, Birch Bay Drive was excavated in order for cars to make it through. CJ’s Beach House can be seen in the background. Photo taken by Edith Loe in 1982.
Photo is courtesy of Whatcom County public works department.

Birch Bay secured funding through Federal Emergency Management Agency (FEMA) intended for emergency disaster relief from the storm. It took almost four years to put it all back together again, said Johannesen.

Of those who were invested in restoring Birch Bay to its original glory was local environmentalist and mountaineer Wolf Bauer. Bauer lived to just shy of his 104th birthday and he was known for his contributions to the state Legislature and shoreline management.

Bauer eventually steered his endeavors to Birch Bay when the county asked him to analyze Birch Bay’s shoreline resources in 1975.

In Bauer’s report, he claimed that growing population pressure would make planning and tight local cooperation a necessity if the bay was to savor the unique shoreline environments that originally attracted their residents.

Bauer was also the first to propose a berm as a solution for Birch Bay’s receding beach.

“Wolf Bauer and the county Public Works Director, Ed Hanken, had to go and convince FEMA that they could put this money into a gravel beach instead of a rock wall, like they usually do,” said Johannesen. “But they convinced them — they built a 1,000-foot-long section, which is the far southern end of our study area.”

Today, that area is around the mouth of Terrell Creek and along the north of Birch Bay Drive.

The berm-like structure that Bauer built in 1986 fared well against storms throughout years and proved to have minimal maintenance.

“The 1,000-foot region did need to be re-nourished several times since ’86 when it was built,” said Johannesen. “It was really just adding a much smaller volume of gravel, generally on the south end.”

After the smaller-scale berm was built on the southern end of Birch Bay, the talk of restoring the entire bay dwindled and wouldn’t seriously reappear until 2004.

“The money ran out, the enthusiasm ran out, and it just sat as a desired project for many years,” said Roland Middleton.

Building the Berm
In the early 2000s, there were a few feasibility studies done to project financial costs, who would pay for what, and how the Birch Bay Berm and Pedestrian Facility Project could eventually be incorporated.

The project primarily resurfaced in 2004 when it was included in the subarea plan for Birch Bay as well as the Whatcom County Comprehensive Plan.

In 2007, experts in geology and environmental hydrology estimated the conceptual cost of the original Birch Bay Shoreline Enhancement Project. Including environmental studies and permits, the final design, and pre- and post- construction monitoring, it was estimated to cost $6,600,000.

“In 2013, it really took off again as a viable project and to have the pedestrian element included inside a public works project,” said Roland Middleton.

On Nov. 21, 2017, the County Council amended the project budget — with all permits submitted, to fund construction and engineering, it brought the total amount of the budget to $11,450,000.

At a County Council meeting on Feb. 12, 2019, members signed a $120,000 funding agreement with the Lummi Nation to provide funds to the tribe to use for natural resource monitoring and impact mitigation related to treaty-protected natural resources during the Birch Bay Drive and Pedestrian Facility project.

Whatcom County commenced the nearly two-miles-long and six-decade-old project by breaking ground with a “sand-pouring” that took place at Birch Bay Beach Park on Sept. 6, 2019.

Included in the project design plan was to remove all old hard-armor material that was originally used to break up crashing waves. The riprap, bulky large rocks and stones, have now been removed, said Roland Middleton.

Although, the concrete groins that stretch into the bay will remain.

“The groins were actually buried under the berm because it would be more expensive to lift them up and take them out,” said Middleton. “They are also over 50 years old; it’s a detrimental structure. It’s not illegal to bury them, but we would need to get special permits to remove them. We didn’t need to and it would cost more.”

In addition, a total of 17 outfalls will be completely redone. The outfall pipes that are associated with Birch Bay Drive will be completed by Whatcom County Public Works while the outfalls outside of the roadway will be done by Birch Bay Watershed and Aquatic Resources Management District.

Since the outfalls are being replaced, they will be brought up to standard throughout the entire project area, which could help improve storm water quality, said Middleton.

Included in the Birch Bay Drive and Pedestrian Facility project are swale drains. The drains run the length of the project between the road and sidewalk.

A swale drain is essentially a ditch with natural vegetation used to slow and control water runoff to prevent flooding and pooling.

Through the department’s coordination with Environmental Science Associates, an environmental consulting firm, the firm’s landscape architect was able to choose plants based on what would naturally grow and survive in this area of the Puget Sound, said Cody Swan an engineer on the project with Whatcom County Public Works.

Swan said there were between 12 to 15 different species of vegetation that were chosen and are being planted along the berm and road.

The Home Stretch
The gusty storm that blew through Western Washington on Jan. 13 proved to be a preemptive test for the berm. If it was to be graded, it passed.

Now, when a wave rolls in against the berm, it passes through the gravel rock. Then, as the water comes back through the rocks, another wave crashes onto the berm, helping to dissipate the energy.

Middleton estimates that the pathway will be finished in the next few months and construction equipment should be removed by Memorial Day this year.

The project’s goals are to protect the road and reduce coastal flooding, which could ultimately reduce the impact from damage by frequent storms. In addition to this, the aesthetics of the beach will be improved.

“To get down to any sort of resemblance of a beach, you had to crawl over these stones,” said Middleton, “just so you could walk through mud to get to the sand and actually enjoy the beach and water.”

Currently, the last of the gravel is being imported from quarries throughout Whatcom County. The remaining work is additional concrete, outfall repairs, the pathway, as well as fine details like benches, according to Swan.

While the project spurred from the concern of the community, the Public Works Department has aimed to work on this project arm-in-arm with Birch Bay residents.

“This is not a [Whatcom County] Public Works project,” said Middleton. “Public Works is building the community’s project and the community has been chanting this for nearly 40 years. That’s really a lesson for communities throughout America. You have something you need, stay firm, keep asking, and eventually it will happen.”
_________________________