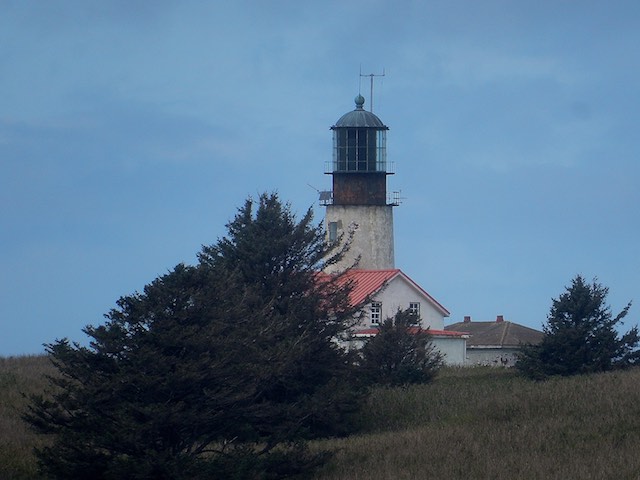 After three days on the southwest coast between Tokeland and Ocean Shores, I continued my journey along the loop highway that encircles the Olympic Peninsula, U.S. Highway 101. On this particular Sunday morning the winding road between Hoquiam and Forks offered a full display of the legendary rainfall on the Washington coast. My planned stops at beach access points near Kalaloch were thwarted by heavy rain and wind. After three mostly wet days, I decided to continue northward and forego any beachcombing for a while.

I left the main highway at Sappho and traveled on the epitome of a long and winding road through Sekiu and Neah Bay with Cape Flattery as my destination. In previous trips to the cape, I had driven past Hobuck Beach without so much as a second glance. Planning ahead for the night I decided to check out the campground that had been recommended by my son-in law. After three wet nights I saw the one available cabin as a pleasant alternative to sleeping on the ground, so I grabbed it! I still had four hours before I could check in so I headed for the cape and a good hike to stretch my legs after the long drive.

After an easy, three-quarter-mile hike from the parking lot, I stood on the lookout at Cape Flattery — the northwesternmost point of land in the contiguous United States. No statistics can be found to convey the natural beauty and sheer energy of the cape itself. Situated at the juncture of the Pacific Ocean and the Strait of Juan de Fuca, the cape is subjected to the natural forces of wind and water in every extreme. The roar of the surf at the cape is constant and the views are beyond spectacular. Just offshore is Tatoosh Island and the historic Cape Flattery Light which began operation in 1857.

The island was named after Tatoosh, a chief of the Makah tribe, which owns the island and the majority of the land surrounding Cape Flattery and Neah Bay. Because of their location and moderate marine climate, the islands off the cape are one of the most intensely studied ecological sites in the world. Studies of the dwindling populations of common murres on Tatoosh Island have provided key research into the effects of ocean acidification and climate change on marine life.

I observed only three murres from the lookout on the cape, but numerous pelagic cormorants were quite active, flying into and out of nesting sites on the steep cliff faces. Western and glaucous-winged gulls and a pair of black oystercatchers were the only other birds at the point. In past trips to the cape in late spring, I observed thousands of murres nesting on Tatoosh with equal numbers fishing in the waters off the island. Birds are ideal indicator species and the absence of this particular species at this location points to a serious problem.

The weather on this day turned out to be superb with sunshine and light breezes. As an extra bonus the deck at the Hobuck Beach cabin provided an opportunity to dry out body and soul, not to mention my camping gear. I didn’t need my cook stove either. After cooking dinner indoors, I spent the rest of the day combing one of the most perfect beaches I’ve ever experienced. The sunset was memorable.

If you’re looking for dramatic rocks and sea stacks with crashing surf, this is not the beach for you. You will find those to the north and south of Hobuck. The beach here is crescent-shaped with a very gentle slope, making it perfect for surfing, swimming, and beachcombing. On the north end of the beach the Waatch River flows into the Pacific and offers potential viewing for a variety of migratory birds. River mouths are usually good for fishing as well.

If you’re up for a good hike, the trail to Shi Shi Beach and the Point of Arches will fill in the drama that you might have missed at Hobuck. This is one of the most picturesque hikes on the coast, albeit one of the wettest. The sea stacks and pounding surf make the journey worthwhile and it is a relatively easy yet challenging day hike. Mud boots would be the wise choice for footwear. If you have the time and the proper permits, backpacking and camping on the beach at Shi Shi is an experience to last a lifetime.

I made an early getaway the next morning to take in Port Angeles and Sequim on my way home. I chose yet another long and winding road that follows the curve of the shoreline on the Strait of Juan de Fuca. If you plan a trip and have no schedule, this is the road for you. However, Hwy. 101 is a pleasant and more direct alternative and Lake Crescent offers a very picturesque roadside attraction. On this day rain returned to accompany me all the way to Sequim and my turnoff to reach the Clallam County Park and the Dungeness National Wildlife Refuge for the night.

At the heart of this 756-acre refuge is Dungeness Spit, the longest natural sand spit in the United States and a classic example of sand spit geomorphology. Complex winds and waves formed the spit, which has been growing by fifteen feet a year over the past 120 years. Wildlife abounds on the spit and includes shellfish, marine mammals, and more than 250 species of birds. For the hardy adventurer, a 5.5 mile hike along the spit will take you to the historic Dungeness Lighthouse. Of course, the round trip is eleven miles, so check your own time as well as the tides to ensure a safe journey. I’ve made this hike a few times before, so I opted to enjoy the forested headlands and open fields before heading for Port Townsend.

Since my first visit almost forty years ago, Port Townsend (PT) has always been one of my favorite towns to visit in Washington. My standard criterion for any town is whether or not I could live there, and PT fits the bill. PT has a discernible connection to its saltwater frontage on Admiralty Inlet. The PT Historic District includes many buildings that are listed on the National Registry of Historic Places, and the main street (Water Street) is a photographer’s delight with its well-preserved Victorian architecture. Downtown PT offers unique shops and restaurants that cater to a variety of tastes for anyone who appreciates a relaxing change of pace. PT’s location on the northeastern tip of the Olympic Peninsula gives it a distinct feeling of isolation.

I had time before my ferry reservation and decided to check out the beach and small marina at Point Hudson on the north end of town. The beach and the area surrounding the marina are always good for birds. As many as fifty Pacific black brant flew in to feast on eelgrass as the tide went out around mid-day. Three species of swallows and several great blue herons were on hand but the big surprise was the lone whimbrel working the cobble beach near the campground.

I was on the end of a great Olympic getaway and had ample time until my ferry departure when I just happened to run into two former ‘hamsters I have known for over thirty years. They now live in Port Ludlow and had come into PT for the day to run a few errands. It was a great surprise and a perfect excuse to stop for a lunch visit before heading to the ferry. Once again, luck was on my side when I was able to take an earlier ferry than I had planned. After six days on the road and all sorts of weather, home was looking better than ever.
____________________________________