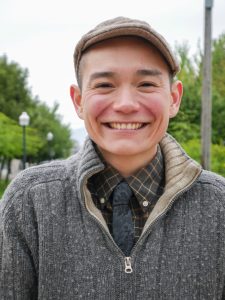 Reframing the question into a statement: WWU is a public university that has a mightily influential presence in the city’s positive growth, accounting for tens of thousands of brilliant minds enriching our area. Whatcom Community College, Northwest Indian College, and Bellingham Technical College also add to our numbers. They absolutely should have a place at the table for planning and providing an array of housing programs and properties to all students in need of them.

Yes. As we become increasingly advanced in all of our technologies, I think the fiber-optic infrastructure will be crucial to the city’s goals of evolving to become 100 percent consumers of renewable energy sooner rather than later. It will also play a role in socioeconomic equity, allowing access to opportunities for improving quality of life that internet connection delivers when used for the better.

Yes. Currently there is Bellingham Municipal Code 20.08.020., under the heading of “family”, that states a lawful situation for a residence zoned as single-family as “one or more persons related by blood, marriage, or adoption, or not more than three unrelated persons, living together within a single dwelling unit.” Many vulnerable renters are breaking this code out of necessity for survival.

I would like to also consult our local conservation corps crews about aggressively restoring habitat. I do not have a more comprehensive planned response to give at this time.

I admire the current plan the WTA has to have an all-electric fleet within the next few years. The city should support this endeavor as much as possible. All solar or wind power structures and facilities built to sustain the fleet could also be used as power storage for other city use. In terms of specific vehicle design, I would like to see built-in child safety seat features, see an overhead text script, and hear an automated voice announcing each stop.

I will not support 5G cell installation until it is properly tested for its effects on living organisms and proves harmless to all pollinators, and also has ample protective legal measures in place so that our lives are not minutely under surveillance in real-time. “Cookies” data collection is intrusive enough as it is.