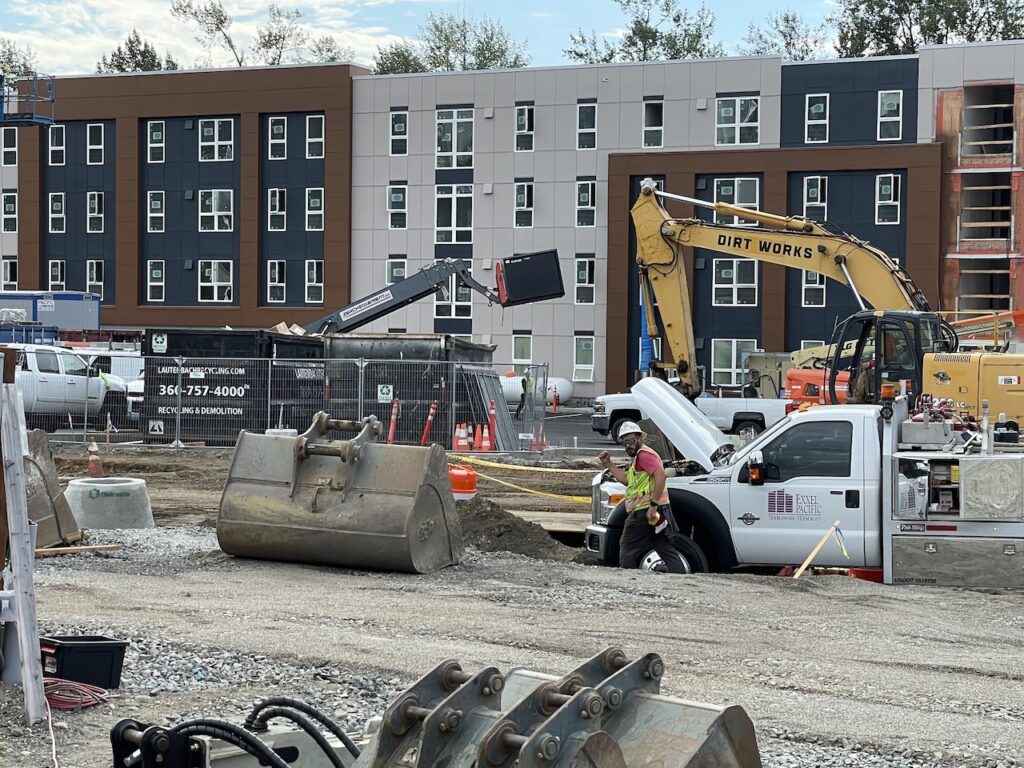 This apartment complex under construction in Barkley Village is not required to comply with Bellingham’s new energy ordinance. The ordinance only applies to future construction.
photo: Ken Brusic

Bellingham has exceeded Washington State Energy Code’s minimum requirements by adopting its own energy code and joining Seattle and Shoreline at the forefront of climate action in the state.

It’s the city’s attempt to reduce its dependence on fossil fuels and the effects of climate change.

The state allows municipalities and counties to amend the state code if they do not go below the minimum performance requirements, according to Building Official Sean Angeley.

• electrifying the water heating system and the air heating and cooling systems,

According to Angeley, buildings either under construction or permitted before the ordinance adoption are exempted.

“Energy efficiency is the cheapest, quickest, and cleanest way to meet rising energy needs, confront climate change, and boost our economy,” Angeley said. In fact, over 30 percent of Washington’s greenhouse gas emissions come from energy use in buildings.

Gradual Changeover
The amendments don’t entirely restrict the use of natural gas. Angeley explained that achieving total electrification can only be done gradually. “Domestic hot water and HVAC (heating, ventilation and air conditioning) is a great place to make a large impact moving in the right direction,” he said.

Many community members have also opposed the idea of their gas stoves and decorative fireplaces no longer being allowed. However, it was a misunderstanding.

“We don’t want to take those emotional connections away,” Angeley said. On the other hand, he said, people don’t care about how their shower water or air is heated.

“Focusing on the heating systems, the water heating and the heating and cooling systems of the building seemed like it was a bigger bang for the buck, because the usage is way higher in those systems than it is for like a gas stove,” said Kurt Nabbefeld, manager of the Planning and Community Development Services. “There’s a ton of air emissions and impacts that come with (using natural gas for cooking). It’s still a bad thing, but incrementally we’ll get to that, or at least have that discussion at some point.”

Impact on Workforce
In December, the city council met with community members who voiced their opinions on the ordinance.

One of the concerns was about the ordinance’s effect on the workforce.

“We also believe there is the likelihood of a net increase in jobs with the increase in solar installations and electrical infrastructure upgrades,” Nabbefeld said.

Nabbefeld said it’s possible that installers will need more training, but he believes that, as the technology becomes more common, the workforce will adapt.

“We think a lot of the installers that are doing work for gas piping and gas furnaces and things like that are also the same installers that will be doing the heat pump installations,” he said. Technologies like heat pumps have existed for a long time, he said.

“Solar is a great example,” he said. “Just look up how many people are installing solar applications today versus 10 years ago. Ten years ago there probably weren’t as many folks that were trained in installation of solar panels and systems.”

The state building codes change every three years, according to Nabbefeld. “The whole development community has to essentially learn new rules and regulations, and they’re incremental changes, so they’re usually smaller. So a change from one technology to another is nothing new for folks in the workforce that are doing these installations.”

Convert to Renewable Energy by 2045
The 2019 Washington State Clean Energy Transformation Act (CETA) requires the state to convert to renewable energy by 2045. “We are transitioning away from fossil fuels, and federal and state governments are going to have to help with that training, and there is some of that already at the federal level,” Nabbefeld said.

Lance Calloway, who manages the Northern District of The Associated General Contractors of Washington, said the ordinance should have been incentive-based, like tax benefits. He worries that the cost of properties and rent will increase. While acknowledging the environmental benefits, he finds the technology to be expensive.

“How long does it take for me to get that return on that investment?” he said.

Nabbefeld said the city expects the new technology to be more expensive, but also that prices will decrease as demand increases.

“Overall and based on quite a bit of research done by Seattle, we believe there will be an average of 1 percent to 3 percent cost increase for a large multifamily building, but these should come down,” he said. “There are many factors that contribute to housing and rent cost and clearly development costs are a factor, but there should be long-term savings on utilities that can be passed on to renters or owners.”

Although they only represent a small part of a home’s total gas use, Dave Ketter, a member of the Multifaith Network for Climate Change, said he would have preferred if gas stoves and fireplaces were included in the ordinance as well.

“Though the ordinance allows for gas stoves and other minor appliances that use gas,” he said, “I think they’ve done a pretty good job of taking care of the major things that will result in reduction of carbon emissions, and I’m happy for that,” he said.

Different Code
Another concern was the fact that Bellingham has a different code than most of the rest of Washington and Whatcom County.

“Because the city will have a different code than most other jurisdictions (at least for a while), this can make it harder for builders and architects as they are subjected to different rules,” Nabbefeld said.

“That may be an issue now, but as the state starts to implement some of the rules that we’re making now, those other jurisdictions will be right there as well. So I think it’s a short-term impact on that.”

Luisa Loi is a student reporter based in Bellingham with an interest in covering local environmental issues. You can learn more about Luisa through her LinkedIn (Luisa Loi) profile, or by contacting luisaloi@live.com.