The latest Special IPCC (U.N. Intergovernmental Panel on Climate Change) Report, authored by 91 scientists from 40 nations, says we’ve already warmed the planet by roughly 1.0 degree Celsius (C), (1.8 degrees Fahrenheit). (1) And, if business remains as usual, we have only 12 years left before we’ve locked in an additional 0.5 degrees C, (0.9 degrees Fahrenheit), for a total of 1.5 degrees C, of global warming, since the 20th century began.

However, Michael Mann and other prominent climate scientists say, as with previous IPCC reports, that this estimate is again watered-down and overly optimistic. (2) They place the blame on the IPCC’s requirement for near-unanimity among, not just the authors, but also their reviewers (which may include bureaucrats and politicians), prior to formal publication. The often more dire, most recent, scientific literature results also tend to be discounted for the same reasons. Though I suspect that their criticism is valid, that alone does not provide a quantitative basis for an assessment of the latest IPCC findings. 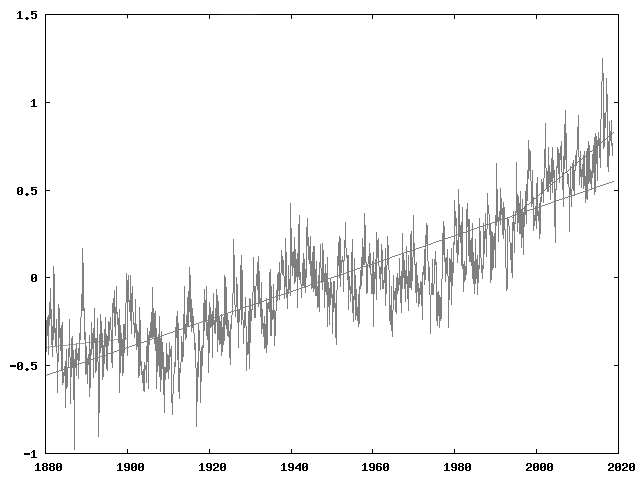 Here, I’ll address this concern by presenting three quantitative estimates, based on three different methods, all suggesting that the IPCC report presents, not a best-case scenario, but rather an incredibly optimistic one.

Assuming “business as usual,” the approaches outlined below yield a tight cluster of estimates of 14.3, 14.6, and 12.7 years remaining to lock in, not just 1.5 degrees C, but rather 2.0 degrees C of warming since global temperature record keeping began in 1880. Thus, even the high-end estimate of 14.6 years suggests that the IPCC’s forecast of 1.5 degrees C at the 12-year mark is overly optimistic by more than 0.4 degrees C.

Despite all professed concerns and counter-claims, man-made, global CO2 emissions are still creeping upward. And there’s nothing to suggest anything other than “business as usual” in our immediate future, as yet.

Meanwhile, those averse to high school math or prone to typing tl;dr (too long; didn’t read) can skip to the heading marked: Items of Note.

Otherwise, I’ll be using (~) as shorthand for “roughly;” degs for “degrees;” C for “temperature in Celsius;” x for “multiplied by;” W/m^2 for “watts per square meter;” ln for “natural log of;” ppmv for “parts per million by volume;” and EXP for “taken to the exponent of.”

Method 1
Based on Current Atmospheric Temperature Trends.
According to the UC Berkeley BEST global temperature time series, we’ve already warmed ~1.1 degs C since 1880. And for the past 25 years, the warming rate has been ~0.21 degs/C per decade. (3,4)

We also have another ~0.6 degs C of global warming locked in, mainly because the oceans have been absorbing ~93 percent of the heat. (5) Water, including the oceans, covers 70 percent of the planet. Thus, our oceans have an enormous heat-absorbing capacity (i.e., thermal mass) that will take another ~40 years to achieve equilibrium with an atmospheric temperature rise that is being driven by heat trapped by the increase in CO2 and other atmospheric greenhouse gases.

Thus, we have a remaining grace period of about 14.3 years at “business as usual,”
immediately after which, we must drop the global CO2 emissions rate, or actually its total greenhouse gas equivalent, to zero.
(0.3 degs C/(0.21 degs C/decade) x 10 yrs/decade = ~14.3 years),

Otherwise, we’ve locked ourselves into an inevitable 2.0 degs C of warming.

2. I’ve used the data from the UC Berkeley BEST study for several reasons:

a. It was instigated by UC Berkeley physicist and former climate change skeptic, Richard Muller.

d. The work is independent of government labs. That is, BEST is the study climate change deniers said they wanted and would abide by — until, to their dismay, Muller testified under oath to the Congressional House Science and Technology Committee that: “We see a global warming trend that is very similar to that previously reported by the other groups.” “Global warming is real.” (8)

3. I’ve used the past 25 years’ data to extrapolate a trend line because that’s about the shortest duration within which the +/- effects of outlier years can be subsumed, in order to establish a credible slope going forward.

Method 2
Based on the Rising Trend for CO2.
Inverting the climate sensitivity equation also yields an alternative estimate of how much time we have remaining. (9)

14.6 years scarcely differs from the 14.3 years found from Method 1, and, obviously, neither timetable is likely to be met or even approached.

Caveat: There have been many estimates of the equilibrium climate sensitivity in the peer-reviewed research literature. And they have varied widely from ~1.5 to 4.5 degs C per doubling of the atmospheric CO2 concentration.

A few years ago, a set of lower estimates for climate sensitivity were suggested, clustering around 2.0 degs C. These estimates coincide with data from the first decade of the 21st century that showed a possible warming hiatus or lull. The lull turned out to be no more than a warming slowdown, not a stoppage, which has been reversed by more recent warming. This suggests, as with earlier instances, that the “lull” was probably due to a natural back and forth sloshing of excess heat within the land/ocean/atmosphere climate system. (11)

As it happens, the standard estimate of 3.0 degs C per doubling of CO2 lies smack in the middle of two more recent estimates published this year. (12,13)

Method 3
Based on Total CO2 Tonnage Released From Fossil Fuels.
Like annual deficit versus total national debt, we know that, more than the man-made CO2 emissions rate, the controlling factor is the total amount of CO2 released by fossil fuel burning since the industrial age began. The significance of the TOTAL tonnage of fossil-based CO2 (via oil, gas, and coal combined) released into the atmosphere, was shown by two papers published in 2009, in the journal, Nature, one of the two most respected journals in science (Science being the other).

Paper #1 said that adding more than 3.7 trillion tons of CO2 (half of which has already been released) to our atmosphere will exceed the +2 degs C warming level (beyond the pre-industrial era), albeit with 95 percent likelihood that the temperature increase will be between 1.3 to 3.9 degs C. (14)

This is even worse than the 14.3 or 14.6 years obtained via Methods 1 and 2 above. So, given three closely clustered estimates derived from three different sources: temperature and CO2 trends, plus total CO2 released from fossil fuels, and that we’ve not yet veered from “business as usual,” it seems rather likely that we’ll not only breach the dreaded 2.0 degs C limit, but also 2.5 and perhaps even 3.0 degs C.

Items of Note
a. Since the two papers driving Method 3 were published, real holes in their analyses or conclusions have yet to be found. Results from the IPCC modeling suite and others coincide with the basic findings, along with various observational data reviews.

b. The current man-made CO2 emissions rate of roughly 4.6 ppmv (37 gigatons) per year is approximately double the actual yearly CO2 increase because the Earth’s oceans and biosphere are now absorbing more than half of what’s emitted. However, whether the recent rise in the airborne fraction will maintain itself remains debatable and is likely to be temporary. (18)

c. Since the annual inventory of man-made CO2 (and other greenhouse gas) emissions is always much larger than the average annual CO2 increase, this suggests, over the past century, that global warming has been all or nearly all man-made, particularly since all other plausible causes (solar brightening, volcanic eruptions, cosmic rays, planetary alignments, Earth orbital eccentricities, natural climatic variability, etc.) have been ruled out. Compare that with the IPCC’s weaker claim that climate scientists now have 95 percent confidence that global warming is largely man-made.

This says, assuming “business as usual,” that the world’s existing proven AND unproven oil reserves are really almost worthless. Since “proven reserves” constitute much of the book value for oil corporations, this will eventually impact their share prices.

Given the Arctic warming rate has been more than double the global average, the Nordic countries are bracing for up to 6 degs C of additional warming. (21) For them, this is a whole new and utterly chaotic world. Thus, Norwegians, for example, though rich in offshore oil, are scrambling to buy electric cars. (22)

The above seems consistent with what many climate scientists are muttering, or, in the case of Dr. Michael Mann and a few others, loudly claiming.

a. for no more “business as usual.” Of course, lending our reins to foreign autocrats and domestic wannabes detracts greatly from any mitigation efforts. For example, other than hydro and nuclear, Putin’s Russia has essentially no credible, renewable energy program. (23)

c. that the cumulative CO2 tonnage limits are in reality too low, which is essentially the same as hoping for b). However, hopes based on b) or c) appear to be undercut by the result from Method 1, as it’s the most data-based and direct of the estimation methods.

d. that, pick your poison, we have some truly devastating (stratosphere breaching, sunlight dimming) volcanic eruptions pretty soon, (24)… AND

e. nature’s ability to keep absorbing more than half of the man-made CO2 emissions continues.

If none of these hopes materialize, the above findings do not bode well.

Ray Kamada, received a Ph.D. in Atmospheric Science, from the U. California, Davis, in 1985. He has been a peer reviewer for Solar Energy Journal, 1981-1986; was a National Research Council Postdoc, 1986-87; Adjunct Assistant Professor and Environmental Physics Group Leader, U.S. Naval Postgraduate School, 1988-1993; and a private consultant for the U.S. Dept. of Defense, 1993-2008, specializing in air pollution theory, atmospheric mesoscale modeling and field research. He was a visiting scientist at the RISOE National Laboratory of Denmark/Danish Technical University, 1986-2014; editor/peer reviewer for the Journal of Renewable and Sustainable Energy, 2010-2015, and for Kamada Science & Design, 1993-2019. Also, manager/cellist for the Protea String Quartet, 2010-2019.