by Karen Dalenius and Judith Akins 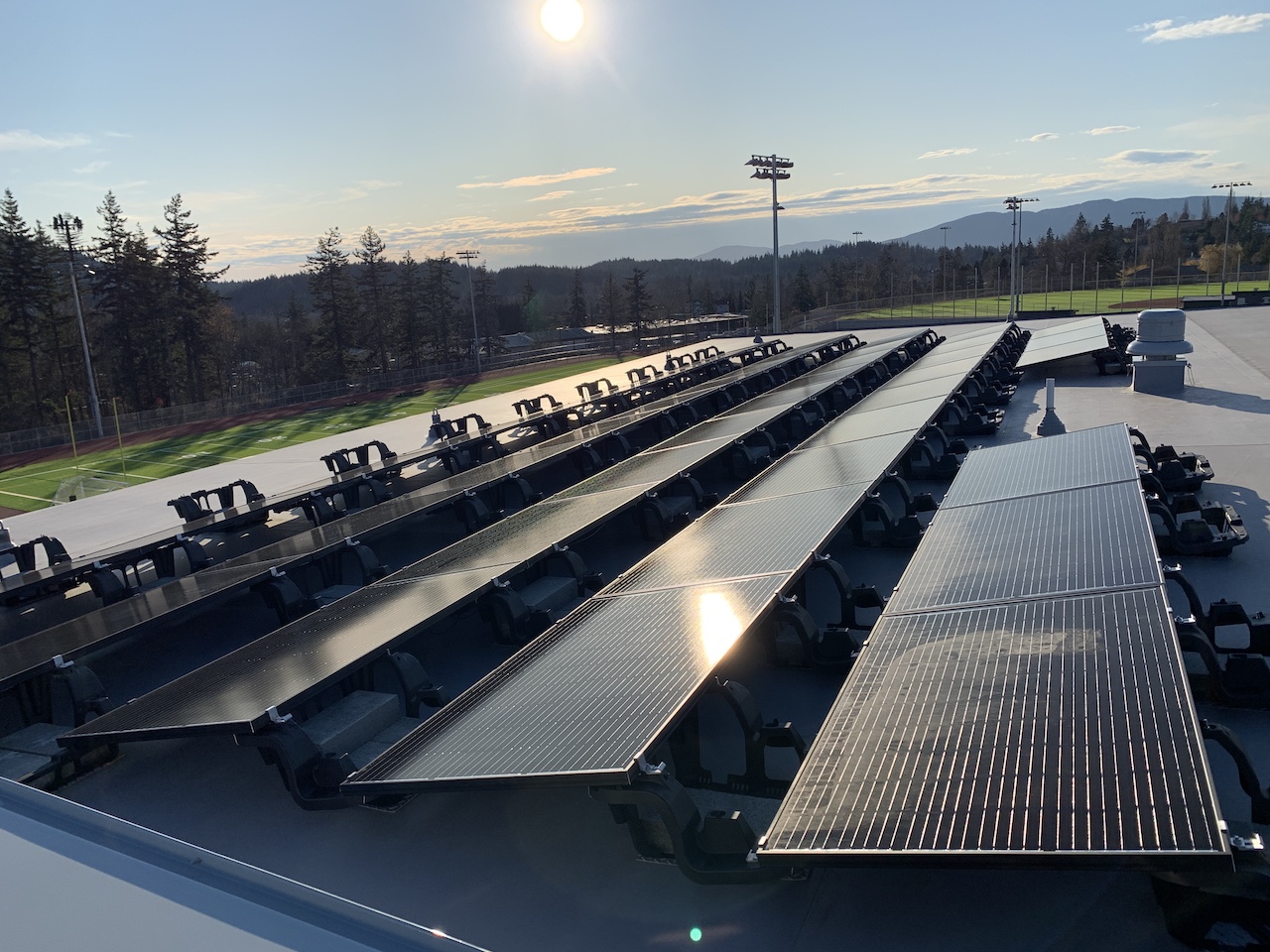 The 2022 Intergovernmental Panel on Climate Change (IPCC) Report warns that we are set to pass the 1.5 degrees Celsius or 2.7 degrees Fahrenheit threshold of global temperature rise above pre-industrial levels (mid-1800s) by 2040 and so are close to reaching irreversible climate change tipping points. Average annual temperature in Bellingham rose 2.8 degrees Fahrenheit between 1895-2018. (1) The county isn’t far behind.

There is no path to protecting the climate without dramatically changing how we produce and use electricity. In 2021, 61 percent of U.S. electricity was generated from fossil fuels. But, we can turn things around. Renewable energy minimizes carbon pollution and has a much lower impact on our environment.

However, renewable energy generation, in particular solar and wind energy in Bellingham and Whatcom County, is meager (noted below). Puget Sound Energy (PSE), which provides most of the county’s electrical power, is also lagging. In 2020, renewable energy sources, defined as hydropower, solar and wind-generated power, accounted for only about 34 percent of the PSE grid. Wind and solar accounted for just 9 percent and 1 percent. Time is of the essence to expand solar and wind energy in our area.

We are also wary of strictly relying on transmission of wind and solar energy from Eastern Washington, PSE’s current model. Recent news of events such as California Pacific Gas & Electric’s declaration of an emergency, after high winds battered utility lines and transmission was interrupted, is concerning.

Pros and Cons
Solar and wind energy are:

1. sustainable and renewable energy sources that do not pollute the air or water,

3. eligible for installation tax incentives, and

4. assets that enhance the reliability, security, and resilience of our regional and statewide power grid. When local solar and wind energy projects are built by locals benefiting locals, jobs are created and local emissions reduced.

Disadvantages need to continue to be addressed. However, the science is undeniable: continuing to rely on fossil fuels to the extent we currently do will leave a damaged, if not dying, planet to future generations.

Whatcom County — Future Prospects
Whatcom County has a moderate wind resource, with a wind speed range of 5 to 6 m/s in coastal areas and a hilltop wind speed range of 7-8 m/s (Columbia Gorge turbines tap wind speeds of 7.5-8.5 m/s). Numerous locations in Bellingham and the county have sufficient wind, such as Sehome Hill; Galbraith, Lookout, Squalicum and Sumas mountains; and Cherry Point. Some colleges and universities utilize wind; could WWU?

Although Washington gets 60 percent of the sunrays that Arizona does, new solar panels can generate energy from both direct and scattered sunlight, so even on overcast days, solar energy works. And, with nearly 15 hours of daylight on the summer solstice, solar production can be extremely high throughout the summer. Solar energy in Washington costs less than the average national cost.

The solar industry is growing in our area; read the related Whatcom Watch article in the February 2021 issue. Prices for rooftop solar have dropped by 36 percent in the past five years, and the state offers solar incentives:

1. An income tax credit: this program will be extended but modified in 2023 to foster expansion of community solar for low-income residents,

2. An exemption from the 6.5 percent state sales tax, and

3. Mandated net metering, with unused energy credits rolling over month to month and any surplus expiring annually, so residents and public and commercial entities can save even more on their electricity bills.

Schools, superstores, the mall, large commercial buildings and barns are obvious candidates for rooftop solar. Superstore roofs alone could generate enough clean energy to power almost 8 million average U.S. homes. There are numerous advantages to doing so and examples of where this has been done elsewhere. (4) Last year, over 70 local officials in the United States, representing over 9 million people, asked Walmart to install solar on all its stores. View one of Walmart’s solar arrays in California here: https://www.solarpowerworldonline.com/2021/04/sol-systems-brings-6-5-mw-of-solar-to-walmart-stores-in-california/.

Less than 1 percent of countywide commercial businesses and less than 1 percent of households have rooftop solar. In order to access rooftop solar, you have to own the building you live in, be able to afford the upfront cost of the system, and have a roof that can support the panels and gets plenty of sun. Most households don’t meet these criteria. A key solution for ensuring access for more residents to solar, according to local advocates, is community solar.

For those who can’t or choose not to put solar on their own property, community solar gives consumers the ability to choose solar. Consumers can own or subscribe to solar systems, getting solar power at a reasonable price. Residents, small businesses, organizations, municipalities, and others can subscribe to community solar projects.

Examples of community solar projects near us include OPALCO installations throughout the San Juan Islands and the Snohomish Public Utility District (PUD) solar microgrid near Arlington (5). Snohomish County created its own PUD to supply their own water and electricity services. Can the Whatcom PUD1 likewise develop a community solar project, or can the COB learn about designing such a program from the Snohomish PUD?

Snohomish PUD Community Solar Microgrid in Arlington. The state Dept. of Commerce helps fund projects like this one, as well as rooftop solar on public facilities like schools.
ourtesy photo: Snohomish County PUD

Other approaches to expanding statewide solar energy include:

• Encouraging the WA Utilities and Transportation Commission (UTC) to modify its requirement that a net metering system consist of less than or equal to 100 kW of power (raise the ceiling for commercial installations),

• Establishing an ongoing net metering statute allowing a distributed generation customer to sell excess energy to a utility at the retail rate,

Currently, if a nonprofit developed a community solar project, for example, PSE does not give participating customers credits on their bill like it would for a project the utility developed itself.

Traditional regulated-monopoly utilities, the kind that Washington still has, provide reliable power at a reasonable cost, but they are not strong on innovation. This model is changing in some areas of the country. One example is Minnesota’s Solar Garden Program. Utilities compete with third-party community solar developers to attract customers. This competition results in greater benefits for consumers, including increased efficiency and lower deployment. (6)

A wind-related project on the cutting edge of renewable energy in Western Washington is the large Skookumchuck Wind Facility near Centralia, owned by Southern Power. PSE’s Green Direct Program taps this energy resource for its customers.

Local Government Plans
The City of Bellingham has made some strides in generating renewable energy. A few small solar arrays were added to city property before 2018, one on the water treatment plant at Whatcom Falls Park. The city’s 2021-2022 CAP implementation plan includes a partnership with PSE to add some panels to that array. The city also plans to develop a state Department of Commerce solar grant.

The 2019 COB Climate Action Task Force Final Report found that, even with recommended building electrification measures throughout Bellingham, a gap remains between the clean energy available on the grid and the city’s clean energy targets. So, in the near future, it recommends the City of Bellingham:

1. Assess community solar, alongside other public organizations, to facilitate community-located, distributed solar deployment (projects could include ground-based as well as building-based systems that would power local municipal, business or household uses), and

2. Provide the community with outreach and education on the benefits of solar installations.

1.  Supporting renewable energy projects in agriculture that can also generate additional farm income, such as solar and/or wind energy on farmland and rooftops, coupled with battery storage; or leasing land for wind energy systems.

2. Creating a task force with Whatcom PUD1, the Port of Bellingham, and tribal and public representatives with the goal of developing a solar and/or wind facility.

The County Climate Impact Advisory Committee recently proposed changes to the wind zoning code that will ease permitting for wind energy systems. It will proceed through customary county ordinance channels.

The Whatcom PUD1 intends to develop a long-term plan that will consider provision of clean and renewable energy throughout the county, and feasibly a demonstration project that uses such technologies.

Recent Legislation
The Federal Infrastructure Investment and Jobs Act of 2021 includes solar and wind-related provisions that:

• Establish programs that support clean energy, such as solar programs and offshore wind, and expand lease areas and tax credits.

The Federal Inflation Reduction Act of 2022 (IRA) (6), includes a comprehensive approach to expand clean energy, including $369 billion over 10 years, the single largest climate investment in American history. Programs will cut U.S. carbon pollution 40 percent below 2005 levels by 2030. Some provisions to boost deployment of renewable energy, including solar and wind, include:

• Funding for Rural Electric Cooperatives and the Rural Energy for America Program (REAP),

Each federal agency (e.g. DOE, USDA, EPA, BIA) will likely stipulate the type of organizations that can apply and the focus or range of uses for their funding. Ideally, local applications for funding will be coordinated.

HB1046 would have mandated virtual net metering, but failed in recent legislative sessions. It ideally will be built upon in the 2023 session. 2SHB 1814 passed this year, creating the Community Solar Expansion Program. The WSU Energy Program will administer the program, distributing $100 million over 10 years for the development of nonutility scale projects, which benefit low-income individuals, low-income service providers, and qualifying tribal or public agencies.

In August, the Federal Energy Regulatory Commission filed its Notice of Proposed Rulemaking on “Building for the Future Through Electric Regional Transmission Planning and Cost Allocation and Generator Interconnection.” Removing barriers to interconnection are vital if we are to diversify our grid. Access the WA Solar Energy Industry Association (WASEIA) comments on their website.

What You Can Do
Take Action:

• Send a personal testimonial to managers of area stores with spacious roofs where you shop (e.g. Walmart, Target, Home Depot, Costco, Fred Meyer), asking them to install solar on their rooftops and parking lots.

• Advocate for state and local government action on wind and solar energy generation.

The 2023 state legislative session will include bills that address solar and wind provisions. To learn about them and when to take action, sign up for updates from Keep Solar Strong in Washington, https://solarstrongwa.org/, or for climate email updates from RE Sources in Bellingham, https://www.re-sources.org/sign-up/.

• Encourage the City of Bellingham and Whatcom County to hire climate office staff.

• Assess whether your home, barn, nonprofit business, tribal or government entity is a candidate for rooftop solar, given the new 30 percent income tax credit. Local solar and wind companies are happy to assist you. You may also qualify for the Washington Power Payback Program.

• Let officials know what you think needs to be done to advance solar and wind energy.

• Contact the COB Mayor or County Executive. We can’t be climate resilient if we don’t lower our GHG emissions, and solar and wind energy need to be part of the equation.

• If you are a solar provider, explore participating in the Community Solar Expansion Program.

• Consider subscribing to PSE’s Green Power or Solar Choice programs to spur wind and solar energy projects within the PSE grid. Or, subscribe to a share(s) in one of their new wind or solar projects.

Karen Dalenius is a retired public health professional and member of the League of Women Voters.

Judith Akins is a retired teacher and member of the League of Women Voters, board member of MBC Sierra Club and Whatcom Million Trees Project.