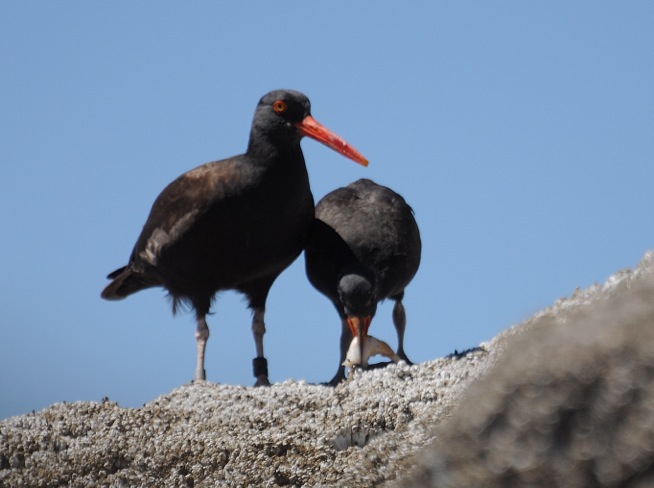 While it might be difficult to imagine, the period between late July and early August is the time of year when birding seasons overlap to the point of — for lack of a better word — confusion. At one point in July some of the birds that have come here to nest and raise the young of the year intermingle with some of the birds that stopped over in April to rest on their way north. By the end of the month these early, northern nesters will begin to show up here and there with young birds in tow, on their way south. For example, I observed short-billed dowitchers at the Blaine boat launch last year at the end of July.

In late February the first of many swallows to come began to arrive. The tree swallows are usually the first species observed, followed by violet-green, barn, and the rest of this great family of birds that keep our flying insects under control. While the swallows were settling in and prior to the arrival of the Neotropical passerine species, northbound waterfowl species were getting restless, along with growing numbers of shorebirds.

Many of the species that wintered on salt water began to display traces of breeding plumage in April and May while the smaller arrivals from the south were already in full bloom. All of this overlapping activity is a joy for birders since there’s so much to see! Departures and arrivals … it seems that every day brought something new in the way of sightings reports on the various list serves. Purple martins were selecting the right nesting boxes at Semiahmoo while many of the loons and grebes had yet to depart for their breeding grounds. The birding was great and the temperatures were perfect for spending time in the field. Contrast the activity of mid to late spring with mid to late summer and you’ll see the origin of a phenomenon I’ve written about before — the dog days of birding — also known as hot weather birding.

Being hot is more of a discomfort for me than being cold. In January you can add a layer, but in August you can remove just so much clothing before running afoul of the law. Regardless of the expected hotter days, I have found remedies to the problem. For starters, do your birding in the early morning or late evening. Focus your activities on places that provide shade and cooler settings. Whatcom Falls Park (WFP) and most of the heavily wooded city parks are ideal. The length of Whatcom Creek that flows through WFP and down to the waterfront provides natural air conditioning and hosts several nesting pairs of American dippers and other woodland species.

Another bonus for midsummer birding in WFP is the ever-present population of nesting barred owls. I went into the park on July 11 and, true to my own oft-repeated recommendation, two adults were busy searching for crayfish below the iconic WPA bridge. Since there were no signs of territorial disputes, I assumed that this was a mated pair. The trick now is to listen for begging juveniles. As long as there are young to be fed, this activity is common in the early morning and is a joy to observe. The young owls depend on the adults for about four months and, as summer progresses, the young birds will eventually find their own food.

Another remedy for hot weather birding — one that I’ve elaborated on in the past — is to head for salt water in any way you can. My preferred method is by kayak, though your mode of transport might vary. There seems to be just enough movement of wind on tidewater to make summer birding more pleasant. In addition, the birdlife you see in marine habitats is quite different from inland birding. There are numerous places along the Whatcom County shoreline to gain access to the water. I’ve never seen it listed before but a recent article in The Bellingham Herald stated that the county has “almost 130 miles of saltwater shoreline.”

I recently put in before sunrise at the Wildcat Cove boat launch at Larrabee State Park to check on the status of a new black oystercatcher chick. I found the chick which appeared to be in great health and understandably so, considering it has been fed regularly by its parents for four weeks. At my best estimate, the chick hatched on June 16, out of sight from the water in the early morning, but I saw it from a nearby promontory with my scope later in the day. As is typical with precocial chicks, it was on the move immediately after hatching. All you could see was a small ball of feathers with legs. It’s quite the experience to document the size difference from a newly-hatched chick to its current size at four weeks. This is a nesting pair that I’ve monitored for the past five years and the nest is always in the same crevice on top of a rock formation known locally as the Gargoyle.

In the past I’ve paddled from the same boat launch to Chuckanut Bay to spend a day of birding between Chuckanut Island and the Chuckanut Rocks. Both of these locations have good numbers of nesting seabirds like pigeon guillemots, gulls, three species of cormorants, and more black oystercatchers. These birds begin nesting a bit later than their inland counterparts so the activity fits perfectly into the warmer temperatures of summer. If you plan to spend time on the water, prepare for the day with necessary safety gear and lots of sunscreen. Food and water come in handy if your plan to stay out for a while.

Birdwatching in general follows well-established patterns, with the most of our attention focused on spring and fall migration. In the overall scheme of things, there are distinctive seasons of birdwatching. Personally speaking, I find that I tend to be more motivated to pursue winter birds, no matter the number of layers I need to address the elements. Summer birding doesn’t have the same appeal, even though the layers are minimal. Perhaps a major difference is the lack of biting insects during the colder months.

While our summer weather might not compare in many ways with other parts of the country, we do have occasional hot spells that make the majority of us appreciate where we live. Even though I grew up and lived a good part of my life in the Deep South, I don’t handle heat very well. You might say that forty-one years in the Pacific Northwest have had an effect on my personal thermostat. I don’t live here for the heat and our moderate, maritime climate suits me just fine.
________________________________