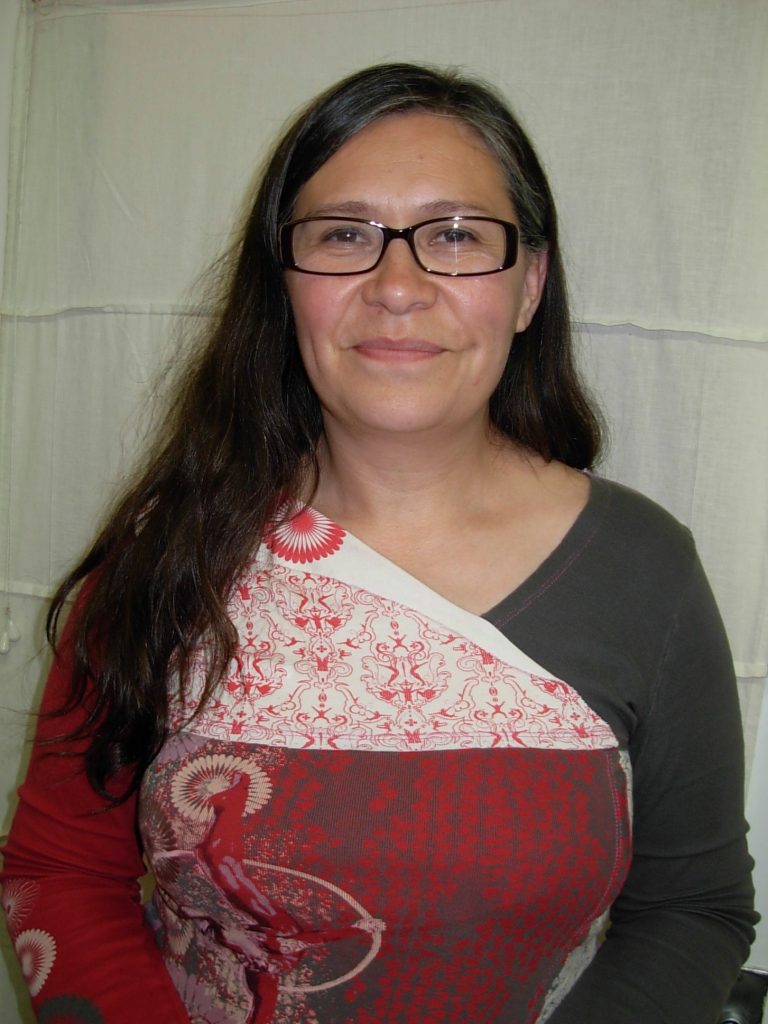 Maru Mora Villalpando was born and raised in Mexico City. She first came to the United States in the early 90s for economic reasons. She returned to the United States in 1994 for political reasons. She lived for many years in Seattle and moved here to Bellingham in 2015 when her daughter Josefina received a scholarship to attend Western Washington University. Mother and daughter are the core team at the Latino Advocacy Program since 2010. Maru Mora does some business consulting to pay the bills but the majority of her work is done pro bono. Though based here, she also travels to places around the state and in Oregon and California.

Kathryn Fentress: I understand that you are “undocumented.” What does that mean?
Maru Mora Villalpando: It means that we lack a piece of paper granting us the government’s permission to be here. A lot of people think that we all come across the border walking through the desert but this is not realistic. Many people like me come on a visa and then do not return to their countries when the visa has expired.

What changed for you in Mexico?
In the late 1980s, the president of Mexico paved the way for NAFTA by going after the unions. With the privatization process, many people like me began to suffer economically. When I was growing up, it was common for people to enter the U.S. to work, save their money and return home. We also knew in Mexico that the same political party always wins, but in 1994 the presidential candidate was assassinated at a public event. Now assassinations are happening all the time, especially to women. I decided to leave for political reasons. I have always been involved in social movements, and when I first came to the U.S., I couldn’t find any. It was really hard. Instead, you are told to assimilate. You are not supposed to use your language; you are not supposed to have an accent, and you are not to be different. So you begin to adapt to those behaviors to fit in.

I tried very hard to reject my values but it was very frustrating and I realized it was not me. Then I had my daughter. Even though she was born here in the U.S., I realized that she would be treated differently because of her name and being a daughter of Mexican parents. After 9/11 happened, I figured that even if she is a citizen, she may not be treated like a citizen so it made me go out and find community. Little by little I started on the path to find a social movement, a justice movement.

Were you taught to be socially conscious?
Several influences combined: living in Mexico City, you get to see a lot of things from everywhere in the world. All the time in the downtown areas of the city you will see what people here call “Occupy” happening. I grew up seeing that when you need something changed by the government, an Occupy is created. I saw the workers of a soda company doing Occupy. They had been there so many years that you could hardly see the colors of their faded union flag. When I would pass them with my mother, she always gave them money and explained to me what the people were doing and why we needed to support them. They were striking for maybe 20 years but finally they bought the company, made it into a co-op. Social values were also taught in school. In Mexico, education is free and many schools have adopted a model developed in Brazil called popular education. This process honors that everyone has knowledge and the teacher does not sit at a desk apart but joins the students in a circle. Students spend four hours in the classroom and four hours in the community where the real learning takes place. When I went to a popular education college, the whole first year was dedicated to understanding why we were there, what types of education were available, and what would be our roles in the community. We prepare to make a contribution when we return to our communities.

What projects are you currently involved in?
The work concerning the detention centers and deportation has been a major focus of the past 3 years. We first came together in 2014 to support the hunger strike at the detention center in Tacoma. The needed changes have to come from the inside, not the outside. We have helped set the stage for those inside to develop leadership. To be successful they need support from those outside. We don’t provide services. We are here to collaborate with people and to change public opinion. We want people to know what is happening, why people are there and how these people are being treated. People and the media on the outside build the pressure and support the people inside to organize with the aim of shutting the place down. We call this Inside-Outside.

Action is our main tool. In 2014 we were there daily. Now we ask groups to adopt one Saturday a month. GEO is the company that runs the detention center. They hire a minimal number of employees and put the detainees to work maintaining most of the facility for one dollar a day. The food is terrible so they have a commissary for the detainees to use their dollars to buy food. GEO also claims the detainees as tenants so they can get a large tax write off for running the program. Thousands of people are detained and millions of dollars are going into the pockets of the people running this machine.

What is your focus here in Bellingham?
We have tried to get the City Council to establish Bellingham as a sanctuary. We gave them a proposal but they ended up passing something that is not pertinent. We also recognized the need to educate the public about the issues and the historical realities. We have been dealing with immigration issues for many years, especially the past three years since Obama escalated the detention movement. Trump’s position is more serious but not new for us. We have no recourse at the federal level, but it is the responsibility of the local government to protect people from these policies. In our workshops we emphasize the need to organize and to create community so that if the police come to the door, you can help your neighbors.

Since the election, we have more people available to help but we need the right people, not everybody. Often white people have good intentions but are not aware of their white supremacy and privileged attitudes. They often come offering to tell us what we should do. They don’t understand that we the oppressed are the ones who know what is needed.
Currently we have Dignity meetings twice a month at the First Congregational Church that are open to everyone. In these meetings we learn about the history, the laws, our attitudes, and how to take action. We also have a weekly vigil on Mondays in front of the Courthouse in downtown Bellingham.

What would you suggest to our readers who are interested in Latino Advocacy?
Join the vigils, come to the Dignity workshops, and put pressure on the City and County officials to protect its citizens. Most of all, we need an attitude of seeing we are all in this together and we need to look after each other. Understand that in these matters, leadership needs to be among the oppressed and that we are working for the long haul, for the future. To win, we have to be a community and let our differences educate us.
For more information: www.latinoadvocacy.org and www.stopseparatingfamilies.org
Facebook: Latino Advocacy

Know of any unsung environmental heroes you’d like to see profiled in future columns? Email me at kfentress@earthlink.net