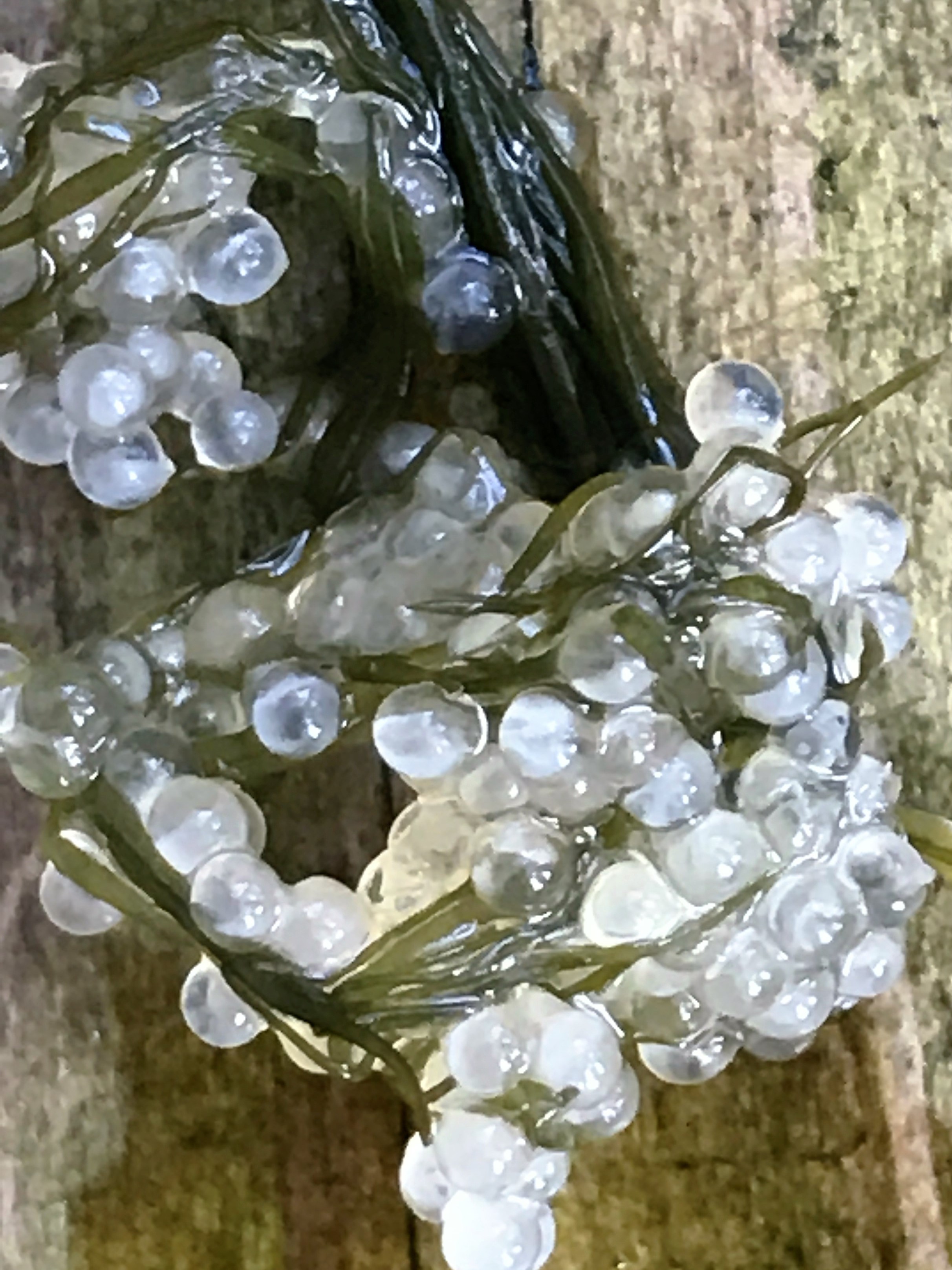 If you have ever been to Whatcom County beaches during a minus tide you have likely seen eelgrass — the long green slender blades that drift in the tide. It turns out these marine grasses are pretty important both locally and globally. Among other things, we can gauge the health of the Puget Sound and Salish Sea waters by the health of the eelgrass beds along its shoreline. (1)

This is the first of a two-part series focused on eelgrass and other Submerged Aquatic Vegetation (SAV) in Whatcom County waters. This installment focuses on what eelgrass is and its critical importance in our recreation, economy and culture, as well as its global importance in our battle with rising carbon dioxide levels.

Eelgrass is one of several important types of SAV. Our native species of eelgrass (Zostera marina) is the most widely distributed aquatic flowering perennial in the northern hemisphere, growing largely in the cooler waters of the northern Pacific and Atlantic oceans. (2)

Eelgrass grows in the intertidal zone on sandy or muddy beaches, shallow enough that its three-foot blades of grass can get sufficient sunlight to promote photosynthesis. Eelgrass tends to grow in large beds called meadows and reproduces by underground rhizomes, just like asparagus, violets and irises. It is also a flowering plant and can reproduce by seeds in warmer climes. (2) A non-native variety of eelgrass (Z. Japonica) has been introduced here as well. It is smaller and can be found on most local beaches higher up the intertidal zone.

Eelgrass as a “Blue Carbon” Sink
Eelgrass plays a vital role in providing food and shelter for our Whatcom County near-shore critters that constitute the food web, and it and other SAVs also have a critical global role.

Eelgrass and other aquatic plants are highly efficient at extracting carbon dioxide from air and ocean and storing it. Carbon thus sequestered and stored in ocean plants and associated carbon-rich soils is appropriately referred to as “blue carbon.”(3) This blue carbon accounts for a huge proportion of world carbon storage by physical area. On a per hectare basis, coastal ecosystems that include mangrove forests, tidal marshes and seagrass meadows can store twice the amount of carbon as can terrestrial forests. (3)
Although seagrasses account for less than 0.2 percent of the world’s oceans, they sequester approximately 10 percent of the carbon buried in ocean sediment. Eelgrass and other seagrasses are known as the “lungs of the sea” because they generate oxygen through photosynthesis. (4) Each day a single square meter of seagrass can generate 10 liters (2.6 gallons) of oxygen.

Daytime minus tides at local beaches during the summer months will expose the eelgrass beds and the critters for exploration. During these low tides the eelgrass is lying uncovered on the beach and one can often find Dungeness crab tucked under lumps of eelgrass. Check out the beaches at Marine Park, Little Squalicum Park, Birch Bay, Semiahmoo Park, Larrabee State Park, Clayton Beach, Point Whitehorn County Park and Point Roberts. 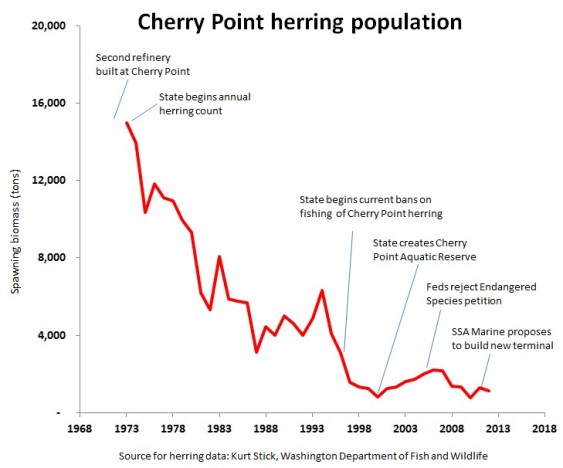 Eelgrass Health Status
A recent research report by the University of Washington, the National Oceanic and Atmospheric Administration and Washington State Department of Fish and Wildlife scientists examined the current extent of eelgrass beds in Puget Sound over the past 40 years. (5) They demonstrated that as a whole, eelgrass in Puget Sound is relatively stable. However, there are a few specific sites that had changed significantly. For example in Whatcom County, while Semiahmoo Bay has remained stable, Lummi Bay has shown some increase in area covered by eelgrass. On the other hand, there was a significant decline in eelgrass beds in the Cherry Point area. Relatively close to home, the report found that Fidalgo Bay near Anacortes has also experienced a significant decrease in eelgrass. Looking at individual sites, more were found with decreases than with increases in eelgrass. (1,6)

Our local eelgrasses generally are holding their own with the exceptions cited, but worldwide and in some local spots they are in serious danger of disappearing at a rate similar to that of degrading coral reefs.

Globally, seagrasses, including eelgrass coverage is declining at a rate of 1.5 percent per year, equivalent to nearly an area equal to two football fields lost each hour. Various estimates suggest that nearly one third of seagrass meadows have died off over the past century. (7,8) So, even though we are doing reasonably well locally, the worldwide trend is dire. Good news is that the world is waking up to the potential problems and taking steps to combat the losses.

In the next installment on this topic, I will describe some of the possible reasons for these disappearing trends along with some of the solutions being applied to restore and preserve what we currently have. (9,10)

Eelgrass Meadows as Nurseries
Eelgrass meadows are vital to the health of local waters and all of the Salish Sea for several reasons. These meadows are nurseries that nurture and protect many near-shore critters and act as cafeterias for feeding them. Eelgrass leaves are home to a variety of organisms including diatoms (minute algae) and bacteria plus detritus from decaying plant and animal matter. These nutrients provide a wide menu for a variety of invertebrates living in and under eelgrass meadows, making the meadows essential to a healthy food web in the intertidal zone. (2,11)

This food web includes detritivores such as amphipods (tiny crustatceans) and polychaete worms. Shellfish delicacies such as clams, cockles, and Dungeness crab feast at this eelgrass table, as do sea slugs, nudibranches and snails. (2,11)

Eelgrass beds also provide protective cover for small and growing forage fish, especially Pacific Herring (Clupea pallasi), one of the more important of the forage fish on the west coast and particularly in the Salish Sea. (12) These herring were once abundant in Whatcom waters, in particular the genetically distinct Cherry Point stock. Since the early 1970s, however, this herring stock has taken a precipitous dive just as the eelgrass beds along Cherry Point have diminished. (13)

“Human encroachment already has put the squeeze on herring. Based on spawning surveys, scientists know that in 1981, Cherry Point herring spawned along more than 60 kilometers of shoreline. By 2004, the fish utilized less than 22 km of the nearshore,” according to a 2013 Sightline article on falling herring populations. (13)

Eelgrass leaves along with that of other aquatic vegetation including algae and kelp provide a substrate for herring to deposit their eggs. (14) Their sticky eggs adhere to the eelgrass leaves, and males then spread their milt though the eelgrass beds to fertilize the eggs. At times this milky colored milt is so thick that the water is fogged. So it really is a nursery for herring and other forage fish such as surf smelt.

Young, hatched herring hang around in the eelgrass beds for a while to the delight of other hungry critters, including young salmon. Salmon hatch from their spawning beds upstream and learn to eat on their own and mature in their natal streams for some weeks or months before migrating downstream toward the eelgrass meadows. In Whatcom county, the major salmon spawning waters include the many tributary streams of the Nooksack River such as Maple Creek Reach, (16) as well as Whatcom, Squalicum, Chuckanut, and Padden Creeks.

Fresh water meets salt water at what’s called an estuary, typically where stream sediments of sand and mud deposit and provide ideal conditions for eelgrass to grow. In turn, these estuarine meadows afford an environment where young salmon have an opportunity to accustom their bodies to saltwater (smolting) while feeding and maturing. A primary prey for young salmon is herring, which with impeccable timing are recently hatched in the eelgrass and other aquatic vegetation.

Forage fish hatched in and attracted to eelgrass meadows are a staple of the Great Blue Heron diet. (17) Many heron colonies are located in close proximity to eelgrass beds. These feeding areas are vital to the survival of the heron colonies with their hatchlings each spring. Check out the big heron nesting colony on the south side of the Bellingham sewage treatment plant at the end of Harris Street by Marine Park. Several nests can be seen high up in the trees to the south of the graveled path that leads to the dog park.

The stability of heron colonies, like the eelgrass beds themselves, is an important biological indicator of the health of the nearshore waters of Puget Sound and the Salish Sea.

At low tides, seagulls also scour eelgrass beds for shellfish and sea stars close to or on the surface. Geese and ducks eat the eelgrass itself.

It’s a very long list of critters that live in and whose very lives depend on the eelgrass beds here and around the world. We need to remember that these eelgrasses make our own cafeteria possible — the salmon, herring and crab, as well as the oxygen they produce and the carbon they store, underscore how much more dependent humans are on these little blades of grass than most of us realize.

Ron Kleinknecht is professor emeritus of psychology and dean emeritus of Western Washington University’s College of Humanities and Social Sciences. He is a life-long nature and conservation enthusiast who writes about the Pacific Northwest.