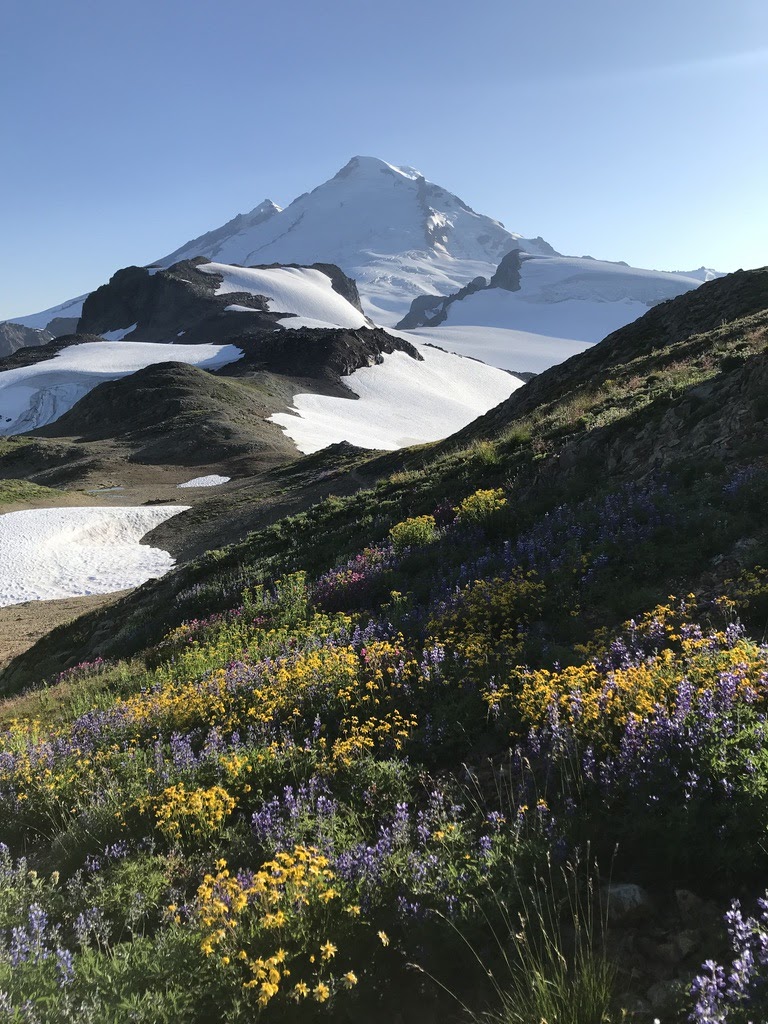 On the first of August 2019, a team of five glaciologists at various levels in their careers hiked through the Mt. Baker-Snoqualmie National Forest. Stepping out of the trees and into a field of purple and yellow wildflowers, the team got their first glimpse of the stunning white-capped Mt. Baker. The excited crew clambered over boulders toward their campsite, situated near the edge of Easton Glacier. Over the following two weeks, they would measure the status of nine regional glaciers to complete the 36th annual field season of the North Cascades Glacier Climate Project (NCGCP).

Mauri Pelto, the NCGCP’s director and vice president for academic affairs at Nichols College in Massachusetts, has been visiting glaciers in the North Cascades each summer since 1984. His goal has been to maintain a long-term record of glaciers in this area and to monitor glacial response to a changing climate. The research Mauri and his field teams have collected tells a story of glacial decline with corresponding signals in climate.

The newcomers to the project learned a critical lesson during the first day of fieldwork on Easton Glacier, despite an explicit warning by NCGCP veterans Mauri and Jill Pelto. The most important place to apply (and reapply) sunscreen is the underside of your nose. A glacier surface reflects up to 95 percent of solar radiation back out to space, or to your nose, if it gets in the way. The amount of reflectivity is the glacier’s albedo, and it is one of the reasons glaciers are important on a global scale. As a glacier melts away, the newly exposed dark rocky surface reflects a much smaller amount of solar radiation, absorbing the rest of it and heating the surrounding air. Large areas of glacial reflectance such as Mt. Baker play a significant role in regional temperature control.

On Easton Glacier, this effect of differing albedo is visible where bits of rock have tumbled down onto the glacier from overlying cliffs. As the rock absorbs solar radiation, it melts a crater into the glacier’s ice and snow. Unfortunately, Mt. Baker’s glaciers do not need dark rocks on their surface to melt significantly each year. 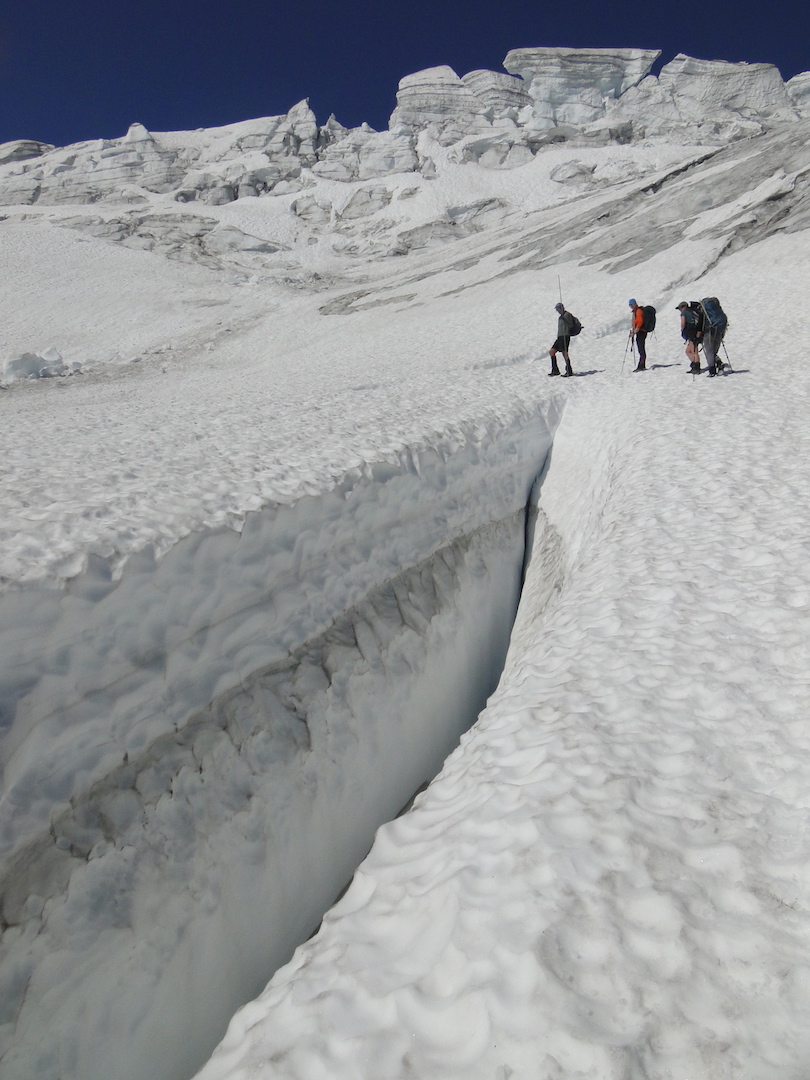 Shrinking or Disappearing
Over the 36 years of NCGCP research, each glacier has retreated, or shrunk due to melting, and some have disappeared entirely. One of the project’s key measurements is glacier mass balance, which represents the amount of mass a glacier gains or loses from year to year. Glaciologists express mass balance in meters water equivalent (m.w.e), which indicates the amount of water obtained by melting the snow or ice. The team uses many point measurements of snow thickness on each glacier to determine its annual mass balance, including measuring the snowpack thickness in crevasses. On larger glaciers that still get significant annual snow accumulation, the snow layer from the most recent winter is clearly visible along the walls of open crevasses, as seen photo above.

The decline in glacier mass balance in the North Cascades comes along with a regional climate trend of less end-of-winter snowpack and an earlier and longer summer melt season. The 2019 NCGCP findings fit the pattern. The Mt. Baker Ski Area reported snow accumulation during the previous winter to be at its lowest since 2015, and previously had not been so low since 2001. Summer temperatures were about 1.4°C, or 2.4°F, higher than average, according to data from the National Centers for Environmental Prediction and the National Center for Atmospheric Research.

Bedrock Knob
With some rare free time during the NCGCP field season, the group traveled to Coleman Glacier on the northwest face of Mt. Baker to compare with 1988 observations. In that time, the glacier has thinned by 35 meters, or almost 115 feet, and the ice front has retreated 550 meters, or about 1,800 feet. These changes were evident not only by how “full” the valley appeared, but also by a new feature that emerged. Glacial flow is split in two directions by a knob in the underlying bedrock, which is now jutting out in the center of the glacier. 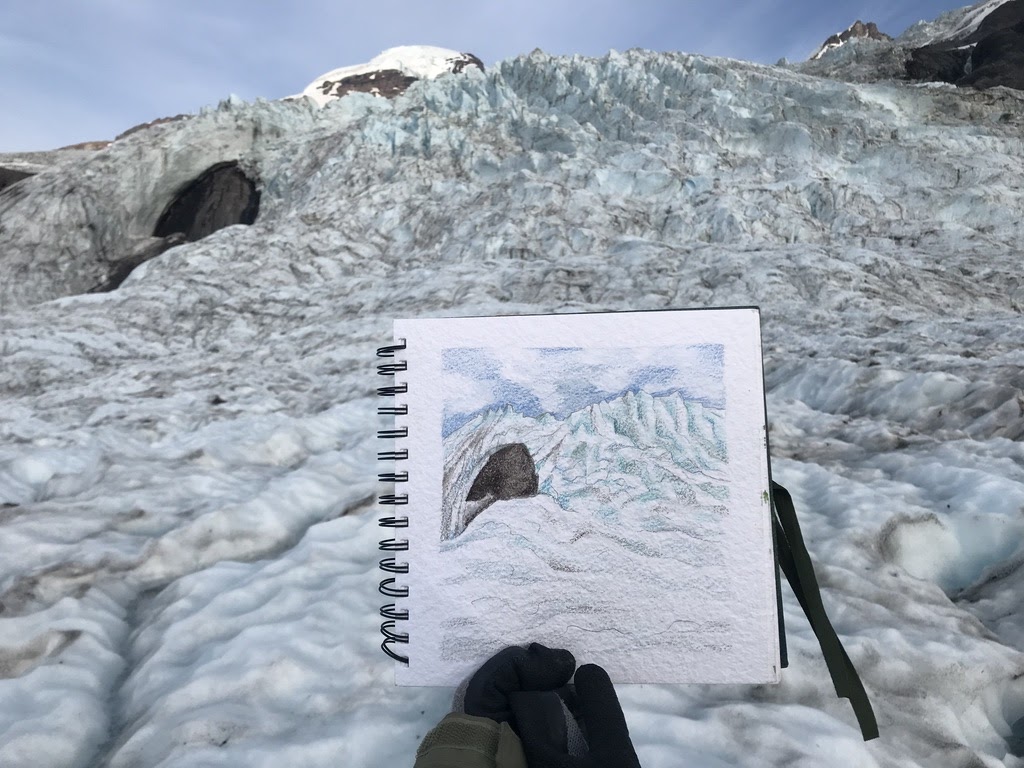 Jill Pelto took a break from field measurements to paint a watercolor of the new reality on Coleman. This was her eleventh summer with the NCGCP and she has created a great deal of artwork to represent the trends of glacial decline. Jill says that painting is a good way to observe a landscape, and that it’s taught her to notice the major changes in the glacier systems. The field team discovered other changes to the glaciers in 2019 that not only impact glacial health, but logistics of travel as well. The bare ice surfaces of glaciers reveal deep hazardous crevasses as well as amplify the need for careful use of crampons. The team also noted brand-new or enlarged meltwater lakes and streams at the front of some glaciers, often requiring a frigid, barefoot stream crossing.

Glaciers Feed Streamflow
In addition to glacier mass and thickness, the NCGCP also takes measurements of streamflow from several Mt. Baker glaciers. Reservoirs and lakes, including Baker Lake and water diverted from the Middle Fork Nooksack into Lake Whatcom, are fed each year by glacial meltwater streams and are an important source of industrial and personal water. Although hot summer days allow glacial melt to increase, the effect is temporary. As glaciers lose mass, there is less snow and ice contributing to streamflow. The trend of dryer and hotter summers limits the surface and groundwater resources as it is, and disappearing glaciers will stress water resources further.

Mauri Pelto has already seen the disappearance of two glaciers originally chosen for the NCGCP: Lewis Glacier and Spider Glacier. Every other glacier is on the decline. On Mt. Baker, smaller glaciers are unlikely to make a comeback in the current climate, such as Sholes Glacier, which flows to the North Fork Nooksack River. The larger Deming Glacier, however, may have a chance of survival, but only if action is taken to mitigate warming temperatures.

It is not uncommon for Mauri to collaborate with other researchers or groups in the field. In 2019, Western Washington University’s Dr. Alia Khan and her graduate student joined the NCGCP on Sholes Glacier. Alia’s interest is in black carbon deposition on glacier and snow surfaces, which originates from the incomplete combustion of fossil fuels. The team also met briefly with Oliver Grah, Nooksack Indian Tribe Water Resource Manager, and collected glacial streamflow measurements to support his work on changing stream conditions in the Nooksack Basin.

Clara Deck recently graduated with her master’s degree in earth and climate sciences at the University of Maine, completing a thesis focused on computer modeling of Antarctic glaciers. She was a member of the 2019 North Cascades Glacier Climate Project team, and regularly shares science through outreach, writing, and social media.