About 5G: Message From a Concerned Parent 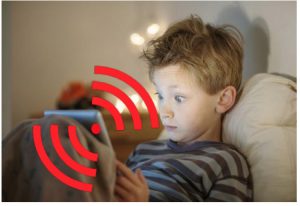 It seems like it’s the invisible things in life that can take on epic proportions and transform our lives in radical ways. I am reminded of how important the unseen world is with the current Covid-19 crisis. Sometimes, it is difficult to remember how much things that we cannot visibly see in day to day life can affect our lives dramatically: until they do. Unfortunately for my family, Covid-19 is not the only current crisis brought about by unseen forces. Here, I would like to tell you a bit about my own ongoing research into our wireless technologies and the 5G rollout (soon to be expected in Bellingham) and what it has meant and will mean for my family.

A Secret Military History
Research on wireless radiation, or microwave radiation, of the sort our devices use, has a long and now mostly declassified military history. Indeed, the military has brought us many of our most environment-altering technologies in the past century. The use of radiation is a story that gains momentum in the Second World War with radar communications, and leads to decades of Cold War military research mostly involving animals and microwave radiation. (1/2)

The militaries, both the United State and especially the Soviet’s, were fascinated with the biological effects of nonthermal radiation, both under, at, and above our current levels used today. To them, focused beams of microwave radiation were the perfect weapon, being odorless, tasteless, and invisible, but also increasingly lethal at higher frequencies. Knowledge of the biological effects to nonthermal (meaning power levels lower than your microwave oven) radiation were largely kept a military secret since it was a Cold War “security issue” based on the needs for radar surveillance.

“Moscow Signal” and Radiation Sickness
At this time, the Soviet military noted low levels of radiation could cause neurological issues, disorientation, headaches, memory loss and depression, and, thus the Soviets irradiated the U.S. embassy in Moscow between 1953-1976. Though the U.S. military discovered the Soviet project early on, they dubbed it the “Moscow Signal” and never informed the embassy staff of the irradiation they were receiving.

Subsequently, three consecutive U.S. ambassadors died of cancer, and the staff reportedly suffered the neurological and physical effects noted earlier by Soviet research.(3) Why was the embassy staff not informed? This is open to interpretation, but may be because the Soviets irradiated the embassy at radiation levels lower than the U.S. safety levels (though above current Russian safety levels). Please note these safety standards are the same safety standards used today in this country, and they are based only on whether or not the radiation can heat flesh. (4)

When the American public did learn about the Moscow signal, the public was not using wireless radiation-emitting devices en masse and the incident has largely been forgotten.

5G Frequencies and Cold War Harm
How does this apply to 5G? The frequencies used on the Moscow embassy were between 0.5 GHz and 10 GHz (Gigahertz), which is in the low frequency range for 5G, since it may use frequencies up to 90 GHz. (5) This frequency exposure is quite worrying since the Soviets used the frequencies to, presumably, harm U.S. embassy staff. Subsequently, there have been several (that I know of at least) ex-military radar workers and equipment inventors who have been speaking out about the frequency range we will soon be blanketed with. The language these ex-military individuals use to advise against exposing civilians to 5G is nothing short of alarming. (6)

But rather than labeling them as “conspiracy theorists,” I decided to look into the evidence they were bringing forward and I found the evidence (from reputable scientific journals and universities, as well as the military reports) converges on multiple layers of harm from these frequencies. (7/8)

So, whether or not 5G brings about faster download speeds, the Internet of Things, and even self-driving cars, is it worth it? Is it worth being exposed to “small cells” erected every 250-300 meters throughout our city, pulsing at 1-90 GHz frequency millimeter wave radiation 24/7?

Experiencing Microwave Radiation
My husband is an academic researcher at the University of Washington with a focus on public health, and he and I have been studying the science of the biological effects of wireless radiation for the past few years. After my master’s thesis on the history of forced labor in the Soviet Union, I was better equipped to understand the Soviet and U.S. military work on low levels of radiation.

Our interest in this area is personal. I had struggled with debilitating health issues for over a decade. My previously inexplicable symptoms were disorientation and nauseous, dizziness and migraines, along with chronic fatigue and insomnia. (9) I had daily headaches and occasional migraines (sometimes multiple times per week) that involved such severe vomiting I occasionally needed hospitalization.

By isolating various environmental factors, it eventually became apparent that it was wireless devices that were causing these symptoms, a fact that surprised myself and my entire family. Indeed, if I were in a crowd of cell phone users, I would develop a migraine in less than an hour, a phenomena that has plagued me since cell phone use became widespread. Now I realize that all those years I was suffering from radiation sickness: a documented, physiological response to radiation that some people experience. (10) Thankfully, after realizing this connection, our family has hardwired our internet and swapped out our cell phones for a landline, which brought me respite from my symptoms.

Stumbling Into Censorship
Unfortunately, in the last year one of our three children has also shown symptoms of this sensitivity, currently recognized in some European countries as “EHS” (electromagnetic hypersensitivity). When using wireless devices at school, she would tend to get headaches that could develop into migraines that could cause vomiting. We have met with the head of the Bellingham school district and provided him with a folder of scientific literature that discusses wireless radiation in schools and harm to children.

Meanwhile, we are forced to teach her at home (a situation that all families are working through now with Covid-19). After reaching out, we were surprised to find out that we are not the only people struggling with our increasingly irradiated environment. We have also realized that our situation and the science that discusses that wireless radiation is harmful is socially unacceptable and suffers widespread discrimination.

A small but telling example of this anti-science stigma is my recent experience posting an article by ex-telecommunication expert, Dr. Tom Butler, titled “On the Clear Evidence of the Risks to Children from Smartphone and Wifi Radio Frequency Radiation.” I posted it in the YouTube comments’ section of my Google account so that interested parents could reference some scholarly evidence. (11) The next day, my entire Google account was deleted (YouTube is owned by Google). Incredulous that I would be censored by YouTube/Google over a dry academic article, I created a new account and posted the same article. Within an hour of posting links to this article on YouTube, my Google account was again censored and the links to the article were deleted, but this time, my landline was also blocked, and I am now unable to create any more accounts. I am not the only one to experience this censorship; I have learned that it has been occurring for years, it is perhaps just getting more aggressive. (12/13)

The Advent of 5G
In this context, the rollout of 5G took our family by surprise, or perhaps it is better to call it a seismic shock. In 2019, we were in Switzerland where my husband was conducting interviews at the World Heakth Organization on, ironically, pandemic preparedness. In certain areas of Geneva, I had sudden migraine attacks so I began to look for answers and discovered, through Swiss news, that Switzerland was one of the first countries to deploy 5G and other citizens were suffering various symptoms such as headaches and tinnitus (ringing in the ears, another symptom of radiation exposure). I was experiencing radiation poisoning symptoms near these “small” 5G cell towers deployed on buildings — indeed, I was experiencing symptoms prior to knowing there were 5G cells above me, since at the time I did not know “5G” was being used by the telecoms industries. This situation, of course, has led to a fair bit of public outrage in Switzerland.

Since returning to our home in Bellingham, we have been disheartened that Bellingham City Council has already approved 5G for our city in 2020, despite many citizens’ blissful unawareness about the experimental nature of this technology and its use of microwave radiation that is much more powerful than 4G. (14)

Becoming Environmental Refugees
As a result of the scientific evidence that already exists about wireless radiation and our daughter’s sensitivity, we have been compelled to pull all our children out of school. Now, we are facing increasing radiation in our neighborhood, which will force us to leave the city altogether. We are looking to buy some land as a “sanctuary” and focus on environmental protection of that land from all threats of poison, both radiation and chemical. The irony of the situation is that we, now too, are becoming “environmental refugees” of a very strange sort.

It seems the trajectory of modern society is one of absolute domination over nature with little regard to whom or what is harmed along the way. This article does not even discuss the implications from 5G on our pollinators, on migratory birds and on other species generally. Rather than heed the scientific evidence that we are contaminating our environments with radiation (or electrosmog), this new type of pollution will form the backbone for our future “Smart City” — the next giant corporate moneymaker.

Refusing the Experiment
It is interesting that our situation today mirrors, on large-scale, the situation of the Cold War U.S. embassy staff in Moscow during the “Moscow Signal” episode. They were not aware, to their own detriment, that they were being irradiated for decades and suffered numerous chronic health conditions. In light of the evidence, we have decided our family will not participate in this mass experimentation, and I hope that you, too, will join us in peaceful, nonviolent, scientifically informed resistance. Thank you.

Danica Thiessen has a graduate degree from the University of Edinburgh, Scotland, and currently lives in Bellingham. She works on educating and feeding her three children while researching issues of historical and global significance. She can be contacted at danica.thiessen@hotmail.com